The Island of Guam provided a tropical and scenic backdrop to an impressive and challenging ultraviolet cured-in-place pipe (UV CIPP) project. In all, 44,000 lf of sewer were rehabilitated — ahead of schedule — as crews managed logistical and planning challenges, as well as working in conditions that included the early stages of a global pandemic.

Upon its completion, this incredible project would become the single largest UV CIPP interceptor rehab project in the United States, according to project officials.

“This is quite an honor and I’m very proud for Michels as an organization,” says Michels Pipe Services general manager Lee Zubrod, who has been in the trenchless industry for more than 30 years. “I’m proud of the people who supported this project, as well as those who put the liner in the ground; they did the heavy lifting on the job.” 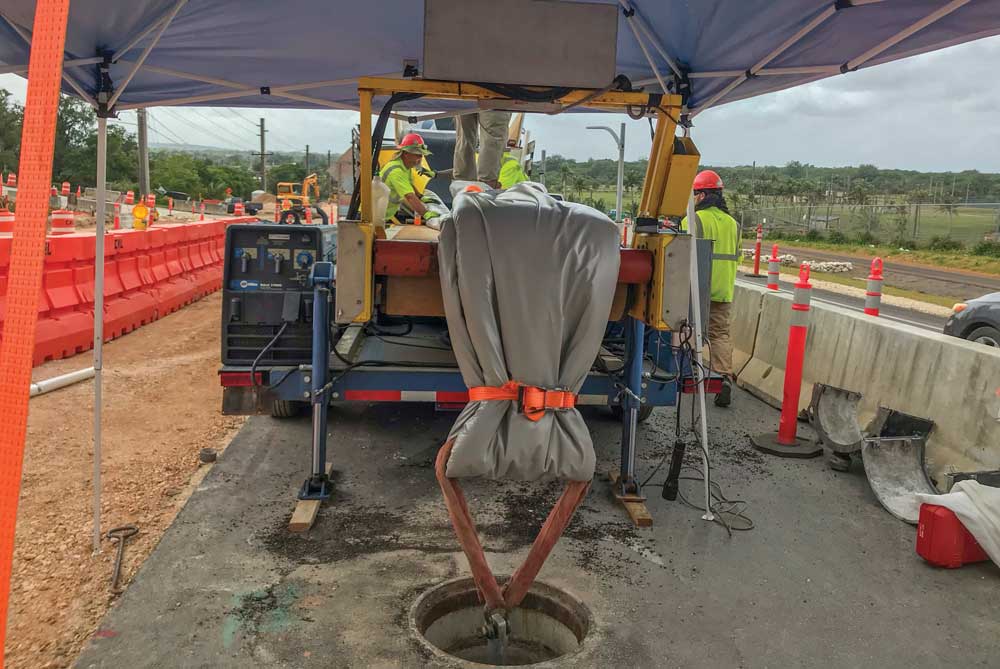 Zubrod, who served as senior project manager on this project, notes that he’s also proud that with this rehab project, Michels and all the companies involved with it, were helping and supporting the U.S. military. “Michels is a huge supporter of the military in the United States and elsewhere. To be able to complete this project for them and in indirect support for the U.S. Marines is something we are very proud of.”

“This was an extremely cool project. The island of Guam is beautiful and the Guamanian people are wonderful,” he continues. “This was a nice opportunity for us professionally to use this UV liner and install it in a project of this significance.”

Located in Micronesia in the Western Pacific Ocean, Guam is approximately 9,000 miles southwest of Michels Corp.’s headquarters of Brownsville, Wisconsin (and carries a 16-hour time difference). A U.S. territory since 1898, the island has an average annual temperature of 90 degrees and is 30 miles long and nine miles wide. Island population is approximately 170,000 residents and is home to more than 12,000 military members and their families. Guam will serve as the future home to the U.S. Marines currently stationed in Okinawa, Japan. New facilities are being constructed to serve an additional 5,000 personnel beginning in 2024.

Established in 1950, the Guam Waterworks Authority (GWA) has a customer base of more than 42,444 customers for water and 29,378 for wastewater. In preparation for the upcoming expansion, the GWA made the proactive decision to rehabilitate the interceptor lines and manholes that serviced the future military base and surrounding areas. The existing interceptor was roughly 50 years old, made up of asbestos concrete pipe. Although in relatively good condition, some deterioration created some issues, including the need for point repairs.


Also, included on the project was the rehabilitation of 141 utility manholes, using epoxy coatings. MoCon Pacific, based in Hawaii, handled the manhole rehabilitation portion as a sub-contractor to Michels.

Zubrod explains the project was originally designed to be a water-pressure inverted, hot-water cured CIPP project but due to the tropical conditions, limited resources and available space for a wetout facility on the island, the Michels team introduced UV-cured CIPP as an available option to the Brown & Caldwell design team.

Instead of building a complete wetout facility, UV liners would be constructed and shipped overseas directly from the manufacturer in Germany to Guam. Using the expertise of the Michels’ logistics and procurement teams, UV liners were purchased from Saertex in Germany and shipped directly to the jobsite. The decision to use UV CIPP ultimately led to the project finishing two months ahead of schedule.

RELATED: HDD Under the Sea

The planning phase for this undertaking began in 2018 with cleaning and closed-circuit TV (CCTV) work taking place between December 2018 and April 2019. Lining began in May 2019 and finished June 1, 2020. 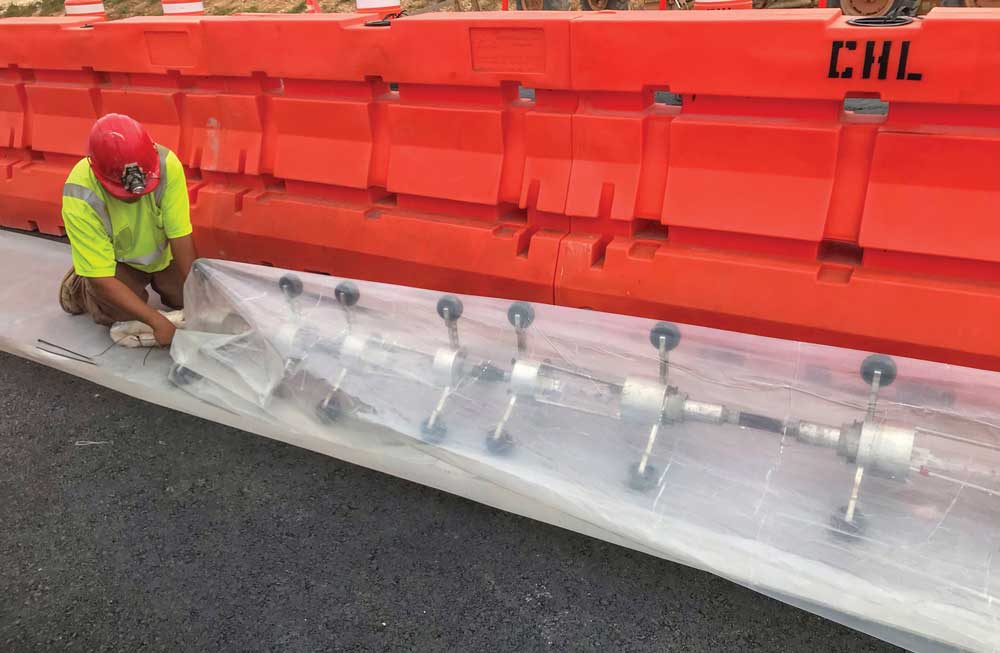 The decision to use UV as the curing method didn’t come without its own set of challenges. Yes, the choice made for a more cost-effective and time-efficient project. However, projects of this size and magnitude come with many challenges — including those of the unforeseen variety. Beyond shipping the needed equipment and personnel for the lengthy stay on Guam, logistics of storing and readying the liners required careful planning and coordination.

“The biggest challenge [was] that according to Saertex’s manufacturing recommendations, we needed to keep that liner at a constant 60 to 70 F,” Zubrod says, noting that there was probably a period of 80 days in which the liner was stored in seas containers on the ship during the 15,000-nautical mile trip to the island. Refrigerated sea containers were used to maintain the constant temperature. Once on Guam, the liner remained in a cold storage warehouse until ready for installation.

“Once we pulled the liner out of cold storage, we took it to the site and installed it,” Zubrod says.

Zubrod and Michels project manager Jason Gubin spent considerable time mapping out each of the installations and coordinating how each would be handled. “Initially, we planned to install the 42-in. liner first but after substantial discussion, we elected to start with the 18-in. one, which was at the top end of the job and then line virtually downhill to the treatment plant,” Zubrod says. 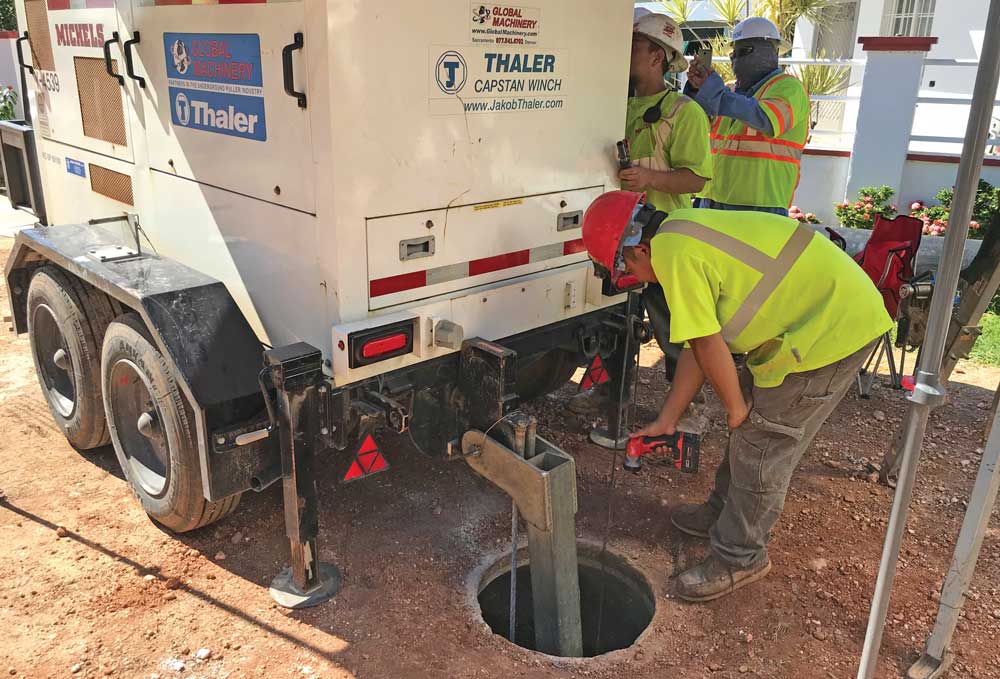 The project also required a substantial bypass during the time of the installation. General contractor Hawaiian Dredging and Core-Tech International handled this aspect of the project, which required a 12-in. and an 18-in. HDPE bypass. The bypass route was in relatively open space but did pass through residential zones, as well as a narrow, yet curvy right of way.

“The job went from the northern most point of the island, along a two-lane highway, as well as into the jungle.” Zubrod says.

Working in a tropical climate with temperatures ranging from the mid-80s to 90 F and daily rainstorms, Michels constructed temporary shelters over each of the 130 installation sites. Two main sections of the project were located through jungle sites. A narrow 2-ft wide, curvy right-of-way proved difficult to maneuver the multiple trucks and trailers through the landscape. Further, Guam is also home to an overpopulated species of brown tree snakes, numbering around 2 million with densities of up to 13,000 per sq mile. 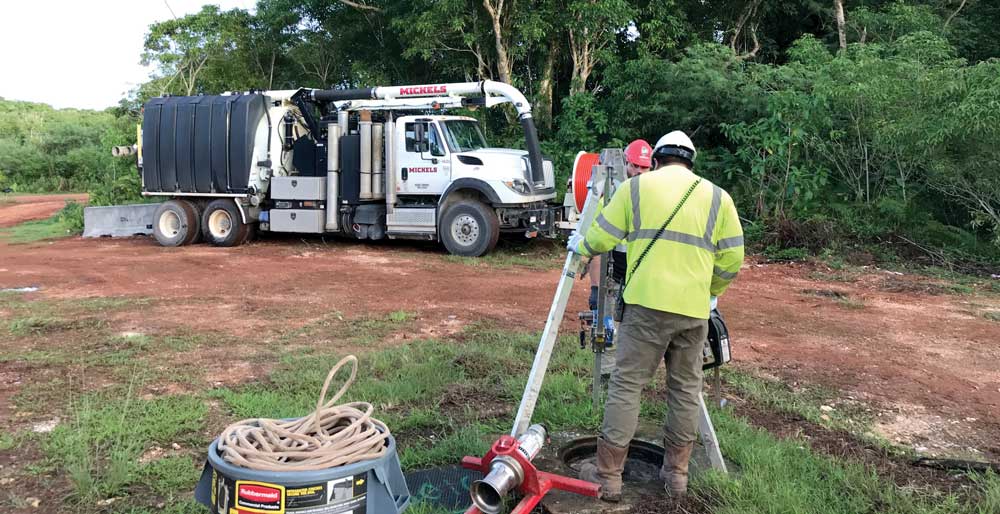 Zubrod credits the expertise of Michels’ logistics and procurement teams in ensuring that all equipment, spare parts and liners were available to the Guam crew from its facilities in Brownsville, Wisconsin, Kapolei, Hawaii and Salem, Oregon. They also handled the compliance of all vehicles with local laws. The total number of units shipped overseas was 10 which included a UV curing truck, pulling winches, folding tables, recycling vac truck, CCTV truck, pickups and tool storage trailers.

“Fortunately, Michels is a contractor that has worked in various places all over the world and we have extraordinary people who help us with those efforts,” Zubrod says.

One aspect of the project that was not pre-planned for was working through the early months of the COVID-19 pandemic. Crewmembers dealt with pandemic restrictions the last four months of the project, which included working while maintaining a proper social distance, as well as wearing face masks in addition to their PPE. Travel restrictions were also maintained; had they left for a visit home (the crew lives in Hawaii), they would have been quarantined for at least 14 days to comply with travel restrictions and local health ordinances at home and when they returned to Guam.

Zubrod describes the working conditions during those days as difficult. High temperatures and humidity were commonplace every day. “The last four months [of the project], the crew never left the island. They couldn’t in order to keep to the [project’s] schedule. Made for some tough times for the guys working there,” he says. “Fortunately, no one [contracted COVID]. The guys remained safe but it was definitely an interesting twist for the end of the project.”

Value of Trenchless Project (US$): $13 million for UV CIPP lining and manhole rehabilitation