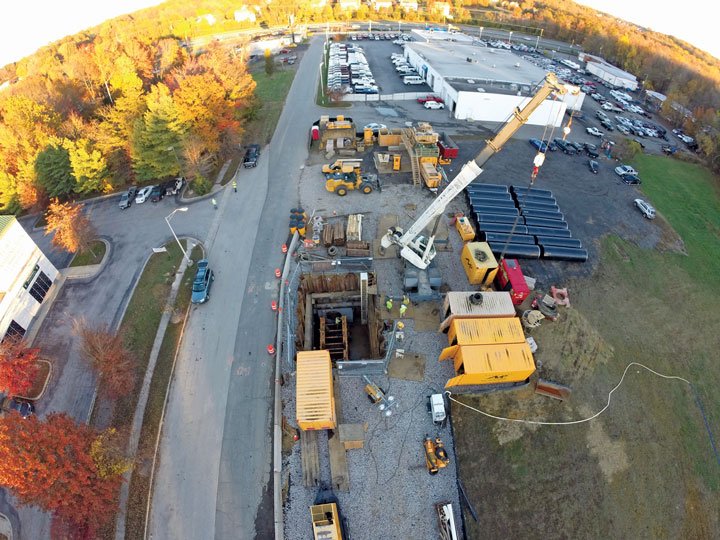 In order to meet its commitment to environmental stewardship and clean-water mission, Washington Suburban Sanitary Commission (WSSC) is building to eliminate sewer overflows in the area of its Broad Creek Wastewater Pumping Station (WWPS). Originally built in 1968 and expanded in 1993, extremely heavy rainfall can cause untreated wastewater to overflow into local waterways.

WSSC engineers enlisted the services of Mott MacDonald and Gannett Fleming. Together they developed a solution — the Broad Creek WWPS Augmentation Project — which involves modifications to the Broad Creek WWPS, new force main/gravity sewer/pressure sewer to the Piscataway Wastewater Treatment Plant (WWTP), and new headworks and emergency storage at the Piscataway WWTP.

The new conveyance system includes five miles of pipeline. Because sections of the pipeline run through environmentally sensitive areas adjacent to parkland in a historic district, WSSC utilized microtunneling technology for 8,700 ft of the alignment. This decision would minimize the environmental impact, increase mobility in areas with limited square footage, and decrease community impact.

To address the problem of overflows, the design team developed a parallel sewer concept in combination with treatment plant and pump station upgrades. In addition to increasing capacity, the redundant system would allow WSSC to shut down only one system for inspection or maintenance while another remained online, a scenario which had not been possible previously.

As is common in tunneling projects today, sometimes design and construction can be the most straight-forward aspects of a project. Indeed, securing the necessary permits and approvals proved to be a challenge for project planners. Part of the alignment crossed property owned by the National Park Service (NPS) in the area near historic Harmony Hall, an 18th century residence listed on the U.S. National Register of Historic Places and owned by NPS.

Because of difficulties in securing a permit and to meet WSSC’s Consent Decree mandates, the team began to innovate to consider alternative alignments, including trenchless methods to help minimize community and environmental impacts.

This led to a number of microtunnel segments being located in sensitive areas that precluded the use of intermediate shafts and were therefore greater in length. Mott MacDonald anticipated that intermediate jacking stations (IJSs) might be required and if so, they needed to work successfully. In order to mitigate the potential risk of an IJS-related stoppage, it was decided to carry out a prequalification process so that drives requiring IJSs would be constructed by firms having the requisite experience.

“In some locations, we were limited in where we could dig, and there was no possibility of building intermediate shafts,” said Austin Freeman, project manager for WSSC. “Because of this, we wanted to ensure that our contractor had experience in constructing long tunnel drives and in using interjacks.”

This was a first for WSSC, but the process worked well with an ample number of contractors suitably prequalified to bid the more challenging drive lengths.

“We found that microtunneling was an appropriate way of dealing with constructability, environmental and right-of-way concerns for the conveyance portion of the project,” said Dennis Funk, project manager for Gannett Fleming. “NPS was pleased that the microtunneling resulted in very little impact on their property.”

To keep the project moving forward along the alignment, WSSC split the project into four contracts, three of which involved tunneling or trenchless construction:

Approximately 2,000 lf of 48-in.ductile iron force main was sliplined inside 66-in. steel casing that was installed by microtunneling in two drives — a 773-lf drive and a 1,161-lf drive. Crews used a skinned up Herrenknecht AVN 1200T MTBM for the microtunneled portions of the project. The South Contract also included a 121-lf tunnel using an Akkerman 720C tunnel boring machine (TBM).

Crews used the same AVN 1200T MTBM in its base diameter to construct an additional 2,000 lf of 60-in. steel casing in two drives (734 and 1,293 lf) for the sliplining of 42-in. ductile iron pressure sewer terminating at the Piscataway WWTP.

The majority of the drive involved a creek crossing where the number of geotechnical test borings was restricted by permit and access constraints. During the drive, the contractor encountered very loose gravel ground conditions. Northeast Remsco intended to use a hybrid guidance system starting with traditional laser guidance, and complete the drive under theodolite guidance. However, instead of switching to a VMT theodolite guidance system that was planned to keep the MTBM on target for the long drive, Northeast Remsco decided to continue tunneling to reduce the chances of the machine sinking, and used laser guidance for the entire drive.

“We decided that we could not risk stopping the machine to complete the survey needed to switch guidance systems, so we completed the drive on laser alone,” said Pete Sudkamp, project manager for Northeast Remsco. “It was pushing the boundaries for laser guidance, but we were able to come out on target.”

The $22 million North Contract was also awarded to Northeast Remsco and was issued NTP in June 2015. It consisted of the installation of 7,367 lf of 48-in. force main and two microtunnels, one 578-ft drive and a 1,308-ft drive. The longer drive was originally envisioned as a 773-ft drive followed by 535 ft of open-cut pipe including open-cut casing installation where contaminated subsurface conditions and close proximity to an existing building were anticipated. The contractor proposed extending the drive to include the open-cut casing segment, and reduce potential impacts on traffic as well as avoid shaft construction in an area with potentially contaminated ground.

The Broad Creek pump station contract was awarded to Norair Engineering Corporation for $31.5 million, and was issued NTP in January 2017. Northeast Remsco was selected as the tunneling subcontractor.

This portion of the project included two 66-in. diameter tunnel drives, 1,160 and 1,560 ft, the last one being the longest microtunnel undertaken by Northeast Remsco to date. The contractor successfully holed through in October 2017. In fact, Northeast Remsco established new corporate records for drive lengths on three separate occasions over the course of the three contracts.

“Long drive lengths create a new set of challenges,” Sudkamp said. “You need to consider 24-hour-a-day operations to keep the pipe string moving, and you have to manage your jacking loads, including proper lubrication techniques and the use of interjack stations.”

In addition to the tunneling, Northeast Remsco built 17 shafts across the three projects, the largest being 47-ft deep and 39-ft in diameter. Northeast Remsco established new corporate records for drive lengths on three separate occasions over the course of the three contracts.

The ground conditions across the three contracts were variable, ranging from cobbles and boulders to gravels to granular soils to clays with stickiness potential. On one jack-and-bore section, a boulder was encountered that led to the construction of a retrieval pit, and the remaining 100 lf of the pipe constructed by open-cut. One 1,200 lf microtunnel drive unexpectedly encountered wood, that led to the construction of three intervention shafts.

Despite the challenges, the tunneling was successfully completed, keeping WSSC on pace to achieve its goal of improving operations at its Broad Creek facility.

“Microtunneling on the project was a success,” said David Watson, project manager for Mott MacDonald. “We were able to work well with the contractor to work through the issues. The fact that the same team was able to work together on all three tunnel-related contracts proved beneficial.”

Sudkamp concurred: “Open and honest communication was important. We were able to develop a good relationship with the team.”

In addition to working well as a team, project managers also needed to build a good rapport with the community at large. This included many community meetings over the life of the contracts. Sometimes that meant working within tight quarters to reduce impacts. In one such instance, a community center allowed the use of a parking lot for an access shaft, which the contractor used to launch tunnels from two directions.

“The contractor and owner worked well with the community in order to reduce neighborhood impacts,” Funk said. “In some cases, the contractor needed to perform significant work just to create enough space for a work area. At the community center, it was paramount that the site was well maintained and secured to allow activities at the center to continue throughout the construction.”

With tunneling complete, work will continue on the pump station and treatment plant upgrades. The Broad Creek WWPS Augmentation Project is expected to be online by July 2020.

Established in 1918 to improve the water quality of streams flowing from Maryland’s Montgomery and Prince George’s counties into the District of Columbia, WSSC has grown to become the eighth largest water and resource recovery utility in the United States. Notably, WSSC has never had a water quality violation in its century of service.

WSSC serves about 1.8 million people through its approximately 11,000 miles of water and sewer mains. Like many utilities throughout the country, WSSC is upgrading its aging infrastructure to better serve its customers and meet the demands of future generations.