UV-CIPP an Ideal Fit for Rehab Under Maine Turnpike

The Greater Augusta Utility District (GAUD) in Maine was originally formed in 1903 as the Augusta Water District. In 1960, the Augusta Sanitary District was formed by the state legislature and by 1963, 48 miles of sewers and a wastewater treatment facility were completed and in operation to protect the Kennebec River. 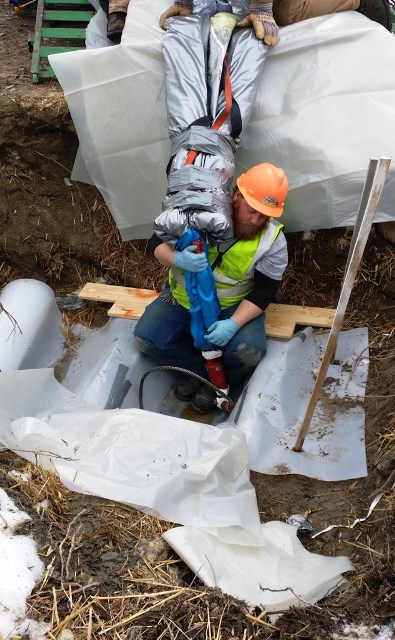 Reline America’s Alphaliner UV-CIPP liner was installed and cured in one day and the pipe was put back into service. The entire rehabilitation project was completed within one week.

In 2007, the state Legislature voted to merge the water and wastewater districts. Currently, GAUD provides drinking water, wastewater collection/treatment, and stormwater services to the state capital of Augusta and the portions of the neighboring communities of Hallowell, Monmouth, Winthrop and Manchester.


With more than 5,700 residential, commercial and industrial customers, GAUD operates and maintains hundreds of miles of water distribution, wastewater collection and storm water conveyance pipelines that are aging and in need of replacement or rehabilitation.

Like many systems of this era, the wastewater collection system was originally designed as a combined system with wastewater and storm water collected and transported to the treatment facility in the same pipe. The treatment facility was designed to handle wet weather flows of 2.5 times the average daily wastewater flows. During wet weather conditions, however, system flows could reach 10 to 15 times treatment facility capacity and combined sewer overflow (CSOs) would divert flow directly to the river. Starting in 1987, the Maine Department of Environmental Protection under the Clean Water Act initiated a statewide program to reduce and eliminate CSO discharges to the waters of the state. Since then GAUD has invested more than $44 million to separate and/or provide storage to eliminate CSO events.

In addition to separating the wastewater and stormwater systems, some areas in the system were reaching their useful life, with sewers more than 40 years old. One critical interceptor was an aging 24-in. reinforced concrete pipe (RCP) that conveyed flows under the Maine Turnpike (I-95) in a low lying wet area. This 450-lf pipeline not only crossed under four lanes of interstate highway, but was under the Old Winthrop Road overpass further complicating rehabilitation alternatives. I-95 is the major highway that typically sees more than 20,000 daily vehicle trips and is heavily utilized for commerce.

RELATED: When a Large Diameter Brick Sewer, Baseball, and Football All Crossed Paths in New England for a Challenging Pipe Cleaning Project


GAUD staff had identified the interceptor for evaluation because the pumping station was experiencing significant wet weather flows and gravel had begun to be found following wet weather events. During wet weather periods, GAUD staff would continuously monitor the station and at times utilize septic haulers to alleviate surcharging. This was a critical section of infrastructure, therefore, GAUD performed a closed circuit television (CCTV) inspection condition assessment. Significant root intrusion and infiltration was found with deteriorating pipe conditions. Immediate rehabilitation was required.

GAUD quickly determined that an open-cut replacement was not an option due to wetland/stream crossings, depths in excess of 12 ft in some areas, groundwater, and most importantly I-95 and Old Winthrop Road Overpass.

GAUD staff collaborated with the Ted Berry Co. Inc. (TBCI), Livermore, Maine, which specializes in infrastructure condition assessment and trenchless pipeline rehabilitation or replacement. Initially, sliplining the 24-in. RCP was considered, however, the reduction in hydraulic capacity was not desirable with the potential for additional sewer system expansion to the west of the interstate highway.

The GAUD and TBCI teams then evaluated the cured-in-place pipe (CIPP) technology, which would only slightly reduce the pipe diameter. TBCI had been installing the next generation CIPP liners from Reline America, Saltville, Va., for over a year. This CIPP liner is cured with ultraviolet (UV) light, which reduces the environmental issues associated with conventional CIPP technology using steam or hot water. The UV-CIPP liner also is significantly stronger with a smaller wall thickness due to the liner manufacturing process, which uses glass reinforced Fiberglass and a patented spirally wound manufacturing process that provides superior strength characteristics.

Budgetary cost estimates were prepared for both sliplining and UV-CIPP; costs were comparable. GAUD staff prepared the final design contract documents and the project was publicly bid in fall 2015. TBCI was the low bidder at $60,000 and was awarded the contract. Based on the collection system configuration, TBCI engineers and operators developed a comprehensive work plan to handle the wastewater flows during the anticipated two- to three-day installation process. Since the interceptor condition was severely deteriorated and based on its criticality and location, GAUD desired the rehabilitation to be complete in advance of the spring 2016 wet weather conditions. 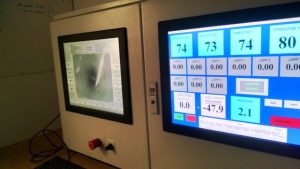 Once the Alphaliner UV-CIPP was installed, the Ted Berry Co. Inc. blower truck utilized low pressure/high volume air to inflate the liner up against the host pipe.

Site work began in late December 2015, with the temporary bypass system installed to provide isolation of the 450-lf section. Temperatures ranged from single digits at night to the mid-teens during the day. A series of bypass pumps was utilized and a 6-in. HDPE bypass force main was temporarily sliplined through a nearby box culvert. This allowed flow to be diverted around the interceptor from west of I-95 to a downstream manhole East of the Interstate.

Once isolated, the TBCI team began installation of the UV-CIPP liner by installing a “slip sheet,” which protects the liner as it is pulled into place with a constant tension variable speed winch. Reline America Alphaliner UV-CIPP liners are designed for each application based on a fully deteriorated host pipe condition and design parameters including soil, groundwater, depth, and traffic loadings. The liners range from 6 to 54 in. in all conventional pipe shapes at lengths of up to 1,000 lf.

RELATED: Social Networks Connecting the Trenchless Industry Across the Globe

Once the Alphaliner UV-CIPP was installed, the TBCI blower truck used low pressure/high volume air to inflate the liner up against the host pipe. The UV light train, which has an integral CCTV camera, was then inserted and a pre-inspection of the entire length was performed to insure that the liner was in place properly. Once the pre-cure CCTV inspection was complete, the Reline America Quality Tracker System activated the nine 1,000 watt bulbs and the UV curing process was initiated. Curing speed is controlled by the Quality Tracker System and is based on the liner design with during speeds in the 2 to 4 lf per minute range.

The UV-CIPP liner was installed and cured in one day; the pipe was put back into service. The entire rehabilitation project was completed within one week. During spring 2016, GAUD staff immediately identified that the rehabilitation was an immediate success with wet weather flows no longer transporting gravel to the pump station and peak flows were significantly reduced to the point where staff no longer had to monitor the station during rain events.