A sewer force main was successfully installed under Victoria Harbor including a pipe pullback through a quiet residential neighborhood, thanks to detailed planning and collaboration between the contractor and engineering team, as well as implementation of a proactive public relations campaign.

The force main installation is part of a larger project to build a new state-of-the-art wastewater treatment plant (WWTP) serving the majority of Greater Victoria. The WWTP is being constructed on McLoughlin Point, a point of land overlooking the entrance to Victoria Harbor. A joint venture of AECOM and Graham Construction (known as Harbor Resource Partners or HRP) are building the project for the owner, the Capital Regional District (CRD) under a design-build contract.

Because the new WWTP will be across the harbor from the City of Victoria, a new pipeline had to be installed under the harbor to convey the wastewater to the new plant. The design called for a 42-in. diameter steel pipe to be installed with a total length of about 3,100 ft. The installation was challenging since shallow granitic bedrock exists along the length of the proposed crossing. Accordingly, AECOM/Graham JV selected horizontal directional drilling through bedrock as the most practical method for installing the pipe. The other major challenge was that the only feasible pipe layout location was along Niagara Street, a narrow roadway through a residential neighborhood.

Design of the crossing commenced in April 2017. The AECOM/Graham JV selected Michels Canada Co. to do the design and construction for the crossing. Michels retained Complete Crossings, Inc (CCI) to perform the design.


RELATED: Improving the Marine Environment: HDD Under the Victoria Harbour

The first priority was to perform a detailed subsurface investigation. The owner’s consultant, Stantec, had performed a preliminary investigation for CRD, which was provided to the design-build proposers with the tender documents. The preliminary program consisted of approximately five borings along the originally conceived alignment and suggested that the HDD bore would pass through the granitic bedrock in an essentially straight alignment across the harbor with the deepest portion being approximately 150 ft below the mudline near the center of the harbor. 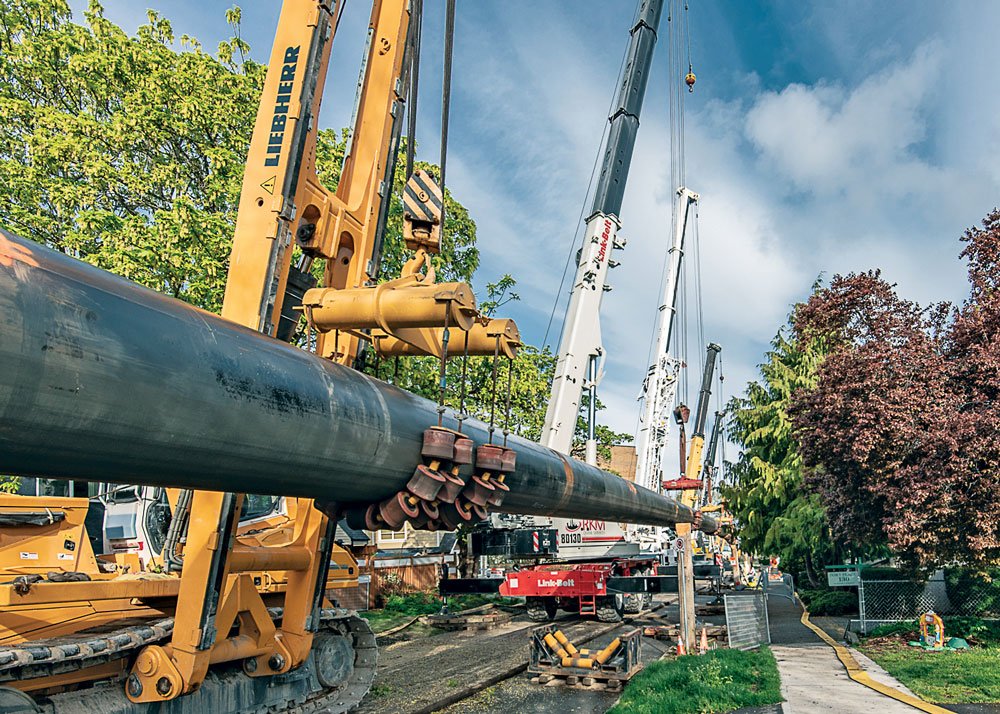 The AECOM/Graham JV under the supervision of AECOM conducted a boring program that consisted of 15 new borings including both water and land borings along the alignment corridor. A total of 69 unsampled probes were also drilled to define the top of bedrock geometry near the Victoria shoreline.

The investigation indicated that the majority of the bedrock was granodiorite with infrequent mafic and andesitic dike intrusions. The bedrock profile was found to vary more significantly than indicated by the preliminary investigation. Pockets of deep overburden were found on the Victoria side of the crossing, which required the alignment be revised and moved to the north using a horizontal curve to stay in bedrock. Rock testing results also indicated a significant variation in the bedrock strength with UCS values of the granodiorite ranging between 2,000 psi to as high as 41,000 psi. In addition, the testing indicated a high abrasiveness of the bedrock with an average quartz content of 27 percent.


As a result of the findings, the alignment was revised and required a compound curve, as well as the use of a surface casing on the Victoria side of the crossing where primary drilling operations were to be performed. A substantial length of casing was necessary in order to seat it into the bedrock through soil overburden consisting primarily of imported fill. Since the only feasible corridor for laying out the string of pipe was along a narrow residential street, it was apparent that a proactive public relations campaign within the neighborhood would be necessary to minimize the disruption and to obtain all necessary approvals. Due to the length of the crossing and anticipated stresses during pullback, steel pipe was selected for the installation. The carrier pipe consisted of 42-in. OD pipe with a wall thickness of 1 in. Since the pipe was to convey raw sewage to the proposed new WWTP, corrosion protection was necessary. A polyurethane lining was designed as the corrosion protection, to be applied to the interior of the pipe. Exterior pipe coatings were also necessary at both ends of the crossing where the pipe passed through potentially corrosive overburden soils. An epoxy coating was selected with an abrasion resistant overcoat.

A steel surface casing of 60 in. in diameter was used on the entry side, which was to be driven to seat into the bedrock. The entry angle was designed to be approximately 12 degrees with an exit angle on the McLaughlin Point side of the crossing of approximately 19 degrees. Despite the steep exit angle selected and increased depth of the crossing, at one point along the alignment there was as little as 20 ft of bedrock cover.

Michels elected to perform three reaming passes, which increased the bore diameter to about 30 in., 42 in. and to a final diameter of 54 in. for the pullback.

Michels began mobilizing equipment to the entry pit site in June 2017. The entry pit location was a boat landing and angler club with a surrounding parking lot. Mobilization began with preparing the drill pads and installing sound walls, which were erected to both minimize the impact of sound as well as to visually block the drilling operations from drivers and pedestrians in the normally quiet neighborhood. One of the many challenges of the overall design was the pipe height during pipe pullback and installation. To mitigate the required pipe string height and lifting requirements, the HDD rig was recessed below grade approximately 6 to 8 ft in an excavated pit with sloping invert.