Trenchless contractors are generally pragmatic people and always assume that a project will have some kind of problem during its course. It is not that they are not optimists. It is just that they have encountered too many unforeseen variables over the years and it tends to make them wary.

There are times when even the most pessimistic of contractor can be surprised for the worst despite pre-planning and information about ground conditions. Call it karma or call it luck. It doesn’t matter.

The fact remains that obstacles in tunnelling are a test of endurance and skill in varying degrees. No matter how one wants to define it, it’s always a bit of a misery for crews. When things head south, it can be tough on the reputations of whole team, customer and contractor alike.

One particularly sensitive project —The Foxfield Project in Ottawa, Ontario — involved the installation of a 54-in. diameter force main under a bus transit way and the VIA Rail train tracks passing through Ottawa’s Barrhaven suburb.

The transit way is a major East-West bus only corridor and the VIA Rail track provides passenger service along the Ottawa- Toronto- Windsor corridor with track speeds up to 100 km/hr.

It was hardly surprising that the project had some close, but well deserved, scrutiny and urgency. Following AREMA and Transport Canada code, the 24-in. water main was going to be installed inside a 48-in. diameter 1 in. wall steel casing.

A lot of discussion and research went into deciding the best methodology to include in the tender. Based on the initial geotechnical information provided by boreholes around the site, the ground appeared to be good clay. Jack and bore and EPB TBM were discussed as potential methodologies.

Marathon Drilling Co. Ltd, the trenchless contractor on the project, was no stranger to tunnelling work in the area and knew that there were some nasty drilling zones. An additional pit excavation revealed a zone of cobbles and boulders right in the path of the proposed force main. In light of this new information, pipe ramming was chosen as the preferred methodology.

Despite more than 30 years of pipe ramming experience in some very tough ground, the Foxfield project workers for Marathon say it felt like going through an asteroid belt — not the ice chunk kind of asteroid but rather the hardest glacial rock boulders type that Eastern Ontario could provide. Contractors knew they were there, but how many and how big remained to be seen.

As trenchless contractors, Marathon knew that choosing the proper methodology doesn’t necessarily make the job easy to do. It just gives the contractor a fighting chance of not losing their shirt. Contractors always finish the job but sometimes it costs them a lot of time and materials.

Set up is always critical but on this project it was particularly important due to the soft wet clay soil conditions. The pit base was just below the cobble zone so it didn’t have any stability from the start. During the project, crews had to be careful not to disrupt a bus transit way and the VIA Rail train tracks passing through Ottawa’s Barrhaven suburb. The rail tracks are seen here in relation to the project’s exit pit.

Once the pipe ramming started the casing developed some overburden pressure about 20 ft in and they had to stop ramming. Workers disconnected the hammer and inside the pipe, right at the face of the rammer was a 48-in. diameter wedge boulder packed in with clay and smaller cobbles.

There was a little bit of shaking of heads and pronouncements of bad luck. As it happened, the boulder field continued to the end of the first 6.09 m (20 ft) of casing. We did a survey and found that the grade at the backend of the casing had dropped a few inches in the pit.

Changes in line and grade are always a concern, but working toward high-speed train tracks made it more of an issue. A full stakeholder discussion or two later, the decision was made to open the trench about 5.48-m (18-ft) long above the casing and use an excavator to lift the casing back into grade. Fortunately, in this instance, there was room for the maneuver and it wouldn’t foul the track. The solution worked.

During this time, Marathon had to stabilize the pipe-ramming track with ¾-in. granular and 1-in. steel plates because there may have been some settlement in the pit due to clay disturbance below the rammer track. While the line and grade seemed to remain stable, the ramming was slow and the crew knew it was going to be a longer than hoped for task to get it safely through.

For safety reasons, Marathon could not stop operations while working under the tracks. This prompted the crews to stop ramming to clean the casing out when it was close to the track zone. Boulder followed boulder.

It is a good day when a trenchless contractor can hear and feel the change in ground conditions through the hammer strikes. All of a sudden, they cleared the boulder field and the pipe leaped forward into the good clay zone — the soils zone that initially prompted the design consultants to consider jack and bore as a viable methodology.

The pipe rammer blasted the pipe through to the exit pit pretty well on line and grade at a rate of 6.09 m (20 ft) every 45 minutes. Even so, when it broke through everyone breathed a sigh of relief.

Crews continued the task of mining the remaining boulders out of the casing well into August. The rest of the project is a standard water main installation. There is no real luck or magic to it once the casing is through and open; a simple case of jacking the 24-in. high pressure concrete pipe in, blocking and grouting it to spec. 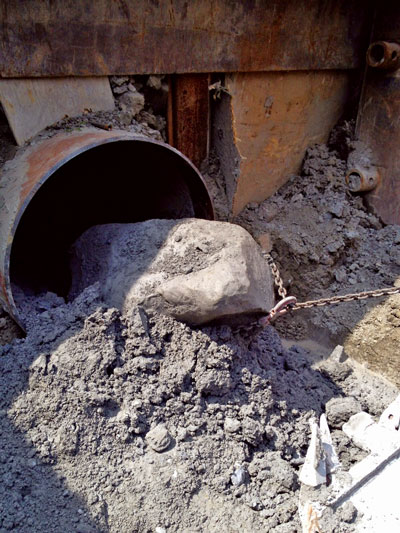 Glacial rock boulders proved to be a nemeisis for the Marathon Drilling Co. crews working on Ottawa’s Foxfield project. Despite more than 30 years of pipe ramming experience in some very tough ground, the Foxfield project workers for Marathon say it felt like going through an asteroid belt.

There is no doubt that geotechnical information is key to providing some project hazard mitigation (and contractors always need more of it) but there is more to the equation. The success of this ramming project involved a combination of both real and subtle variables. Having senior and cool-headed consultants to work with certainly helps because they understand the challenges faced and the proposed solutions.

But the real truth remains that while “best practices” contractors have good technical and regional experience in their market and can communicate this experience effectively, it is the willingness of the project team to trust each other and share knowledge up front and during the project that enables it to succeed in the end. No luck involved.