The midsize horizontal directional drill (HDD) market is a little like the proverbial middle child — sometimes forgotten but is quietly a stabilizing asset to the family. In the HDD world, this rig class is just that.

We all hear about and read about the sleek, compact rigs doing the telecom and fiber-optic work. The ginormous maxi rigs are routinely featured in cool, massive install stories. What about the midsize rigs? This class — whose size and power have the largest range — quietly remains the foundation of the somewhat up-and-down HDD industry, righting the ship when its compact or maxi siblings stumble.

We spoke with some industry veterans about this HDD rig class, wanting to know more about it, what their customers tell them about the market and what they are looking for in a midsize rig. We also asked how they see the market projecting forward.

“The midsize segment is by far the largest. Most contractors out there are running midsize rigs every day,” says Ditch Witch HDD product category manager Seth Matthesen. “I would say that nearly two out of three HDD units on jobsites today are in the midsize class. If you look at the percentage of product that is put into the ground every year, I would estimate that 70 to 80 percent of it was put in the ground with a midsize rig. The midsize group almost covers every single industry whether it’s telecom, gas, electric, sewer or water. These rigs will work on a diversified industry level.”


Vermeer product manager of trenchless products Tod Michael agrees and stresses how critical this rig class is to the overall health of the HDD market. “From a manufacturer’s perspective, [the midsize class] is the most important market segment,” he says. “It’s where the volume of drills is built as well because it’s where the volume of work is at.” 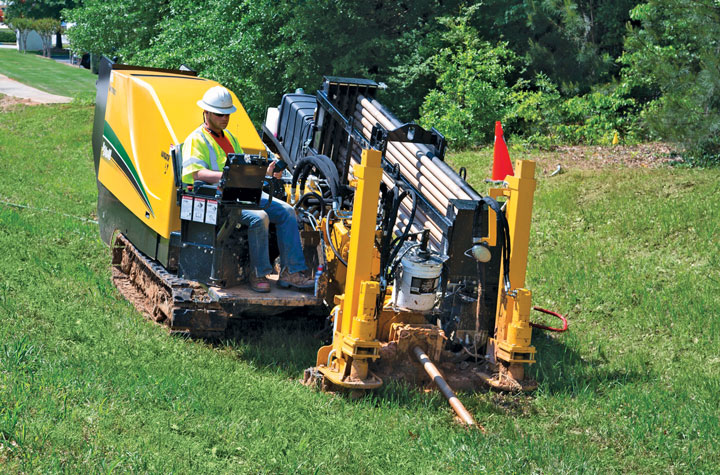 The size and power of all the rig classes have changed over the last 20 years or so. The compact class is usually anything up to 20,000 lbs of thrust and pullback. The maxi class generally is anything bigger than 100,000 lbs of thrust and pullback. The midsize class falls in between with the majority of the rigs falling in the 20,000 to 60,000-lb range. Some schools of thought have the midsize class going as large as 500,000 lbs.

“Part of the definition of the midsize class in the 1990s, it was understood that the midsize rigs were from 40,000 to 500,000 lbs of thrust and pullback. But, generally, today, they are in the 40,000 lb range,” says American Augers director of product management Richard Levings, who has been around the HDD industry since the 1990s. “Generally, about the 500,000-lb mark is where the break is for the trailers and tracks. Above 500,000 lbs, the rigs are on trailers.”

Whereas the compact and maxi rig experience cyclical runs, depending how the telecom and oil and gas markets fare, their midsize sibling enjoys a more consistent and sustained livelihood. The experts we spoke with all agree that the midsize market today is strong. The word “robust” came up more than a few times to describe it. The general consensus is that the market will remain “robust” for the foreseeable future, thanks primarily to the continued telecom/fiber-optic push and the energy work this rig class can handle. Throw in water the replacement market for rural urban areas, and these rigs will be working steady for some time.

“Part of the reason that I believe it is more consistent is because it covers such a variety of work,” Michael says. “In general, I would say this rig class IS the market. It is robust and the largest of all the markets. There have been down years for this rig but typically when it’s down, it is not nonexistent. It’s just lower in volume but the contractors are still working.”

The rig’s versatility is the key to its success and sustainability. “The midsize rig can work on almost every project,” Matthesen says. “That is the reason it has such stability. It’s a diversified portfolio in the product line because you can have a 20,000 lb rig, depending on soil conditions, use it for a 200-ft shot in one part of the country and that that same rig in another part, can use it going out up to 600 ft, putting in 2 in.

What are HDD operators of midsize rigs looking for when perusing the rig lots? Not surprisingly, many of the operators’ wants are the same as those who are looking to buy the compact and maxi units: easy to operate, reliability and commonality of the product line.

“We are always told they want the rig to be reliable because these rigs have to be up and running every day,” Michael says. “They also want the rig to have ease of operation in part due to the shortage of operators. Today’s operators are being trained to be able to move from machine to machine, whether compact, midsize or large so making the transition from model to model is critical.”

Operators also want easy mobilization and teardown, as well as power. “They want as much power as they get into a smaller unit,” Levings says.

Michael adds that he is also beginning to hear from midsize customers that they are interested in project and planning tools that can be downloaded on the rig to collect data as they install the project. “Having the ability on a rig to collect data is becoming a bigger thing, especially for the water and gas contractors,” he says. “Some of the data requirements started out on the pipeline side of the business. We’re helping to automate this function so the operator doesn’t have to manually log that information. That is a little unique for midsize rigs but we are continuing to add the feature to more rigs.”

Not an easy job to predict the future, especially when so many factors impact the projection. The experts do agree that for the short-term — meaning two to five years — the midsize market will continue to be “robust.”

“From a personal perspective, the midsize market is everything to American Augers. It’s the bulk of our product line. We see this segment of the market being healthy for some time,” Levings says. “It’s just where the work is right now and the size of the projects being designed. Most of the pipelines being planned fall right into the midsize specifications.”

“When I talk to contractors, especially those who are diversified, they tell me they always want midsize rigs because when the pipeline market goes up and down, they can rely on that for their business,” Michael says. “They may not be as profitable during those times, but it’s what pays the bills.”