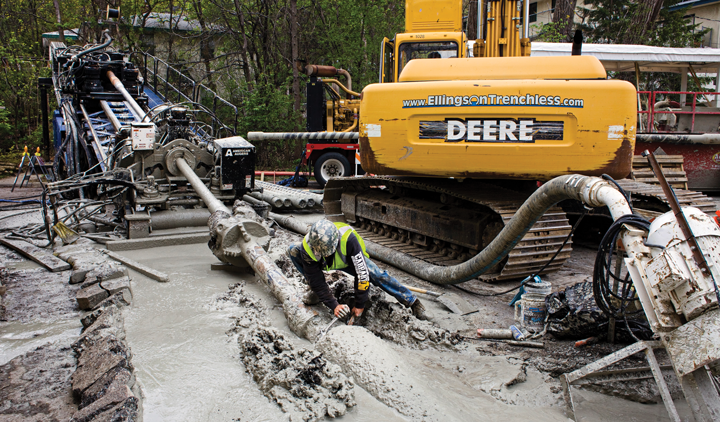 Replacing more than 11 miles of gas pipeline, considered the backbone of the system that serves Minnesota’s capital city St. Paul, brings multiple challenges. However, all of the things that could’ve gone wrong when working under firm deadlines, in a packed urban environment with diverse residents and nearly constant traffic, well, simply didn’t. With the pipeline reaching the end of its useful life, Xcel Energy engaged Q3 Contracting and Ellingson Trenchless to develop a plan to renew the line within a time frame that minimized the impact on local communities, and kept customers safe.

No one doubts that constructing a 20-in. pipeline through the heart of any metropolis is a tremendous undertaking. True success hinges on the ability to keep such a project under budget and on schedule. And that’s exactly what’s happened in St. Paul with the help of Q3 Contracting and Ellingson Trenchless.

One of the biggest challenges in constructing a major pipeline in a diverse, multi-ethic urban environment involves effectively communicating and planning with the residents and businesses along the route. The St. Paul project was to go right through Minnesota’s capital city, bisecting seven very different neighborhoods and district councils, four city council wards and multiple business districts. Constricted HDD sites required unique planning and utilization of small work spaces. Stringent sound mitigation was also critical to keep residents and local businesses in the area happy and uninterrupted.

The level of complexity surrounding the project’s setting, demanded a level of deliberateness when it came to the outreach plan for the community. Attention to detail – such as preparing fact sheets in four other languages, confirming everyone has access to their homes and properties, and further, ensuring police and fire departments have clear access in case of emergencies – was absolutely critical.

And the mindful tact paid off. Neighborhoods and policy makers came together to educate themselves and prepare for the nearly $70 million infrastructure investment in their community. It’s a prime example of how companies that demand coordination and proactive thinking from the get-go, can successfully head off future and potential problems.

This was the first time the St. Paul pipeline had been replaced since it was installed in the 1940s and 1950s. While major outages along the line had not been an issue, the existing pipe had been installed using compression couplings and seen a series of failures in recent years.

With the pipeline reaching the end of its useful life, Xcel Energy engaged Q3 Contracting and Ellingson Trenchless, a third-generation, full-service construction company that specializes in trenchless solutions, to develop a plan to renew the line within a time frame that minimized the impact on local communities, and kept customers safe. The project was a significant step in Xcel’s overall gas investment plan – with even more work said to be done on infrastructure in the future. In addition to the sometimes-unpredictable rock formations in the St. Paul area, the age of existing and abandoned infrastructure created its own set of challenges. Early in the 20th century, underground utilities we’re placed in hand-mined, brick-shored tunnels that traverse the city.

The new pipeline had its challenges – one of the biggest, was constructing 6- to 20-in. steel gas main HDDs, totaling more than 5,000 ft in a busy metropolitan area. Several of the HDD were constructed through neighborhoods, under major interstate highways, and next to several environmentally sensitive areas.

And then there were the soil conditions associated with the work. Several of the bores encountered challenging rock and soil formations including running sand, limestone and the unpredictable St. Peter Sandstone formation. Crews encountered rock that was more than 18,000 psi on several of the bores. Picking the right tooling and equipment was a major challenge on this project, as most of the bores would encounter multiple subsurface formations, transitioning from soft soil to hard rock many times throughout a single HDD. Ellingson utilized several different HDD rigs and equipment, including a Ditch Witch JT 100 and American Augers 440T, to complete the project.

In addition to the sometimes-unpredictable rock formations in the St. Paul area, the age of existing and abandoned infrastructure created its own set of challenges. Early in the 20th century, underground utilities we’re placed in hand-mined, brick-shored tunnels that traverse the city. Unfortunately, record keeping of these now abandoned tunnels was not a high priority, so this challenge was met by working closely with veterans of the local St. Paul water and sewer departments to identify abandoned infrastructure.

For an industry that prefers strait shots, the sprawling landscape of St. Paul only added more complexity. While crossing Interstate 35 in Downtown St. Paul, the HDD alignment had to be shifted to include a horizontal radius from one neighborhood street to another. The topography in the area would not have allowed for a deep enough profile, had it been done in a straight line. Through proper planning, locating equipment and experienced personnel, this complex HDD was installed without incident. One of the biggest challenges in constructing a major pipeline in a diverse, multi-ethic urban environment involves effectively communicating and planning with the residents and businesses along the route.

One of the main localized challenges with this type of project, is carrying out the work with minimal disruption of traffic. To do this, multiple HDD rigs (both mid and maxi size) needed to be utilized. There were multiple neighborhood bores, along with a major six-lane interstate crossing – these HDDs required special care. Major road crossings and closures were scheduled on weekends, and working hours extended during the closures periods.

The project has had a positive and significant economic impact on local communities, bringing jobs and increasing property tax payments to local government. Working with Minnesota based, Companies on everything from inspections and as-built drawings to surveying and construction – has had its benefits to the community. Q3 and Ellingson contractors’ local knowledge of the area and specifically the St. Paul system, has proven invaluable during the construction process.

On the financial side of things, there is another major success; the project involved an overall budget that has been less than initially planned. While the original budget for the four-year project was set at $69 million, the project was completed at a total cost of under $64 million.

Duncan Salyer is a writer at Clutch Performance.