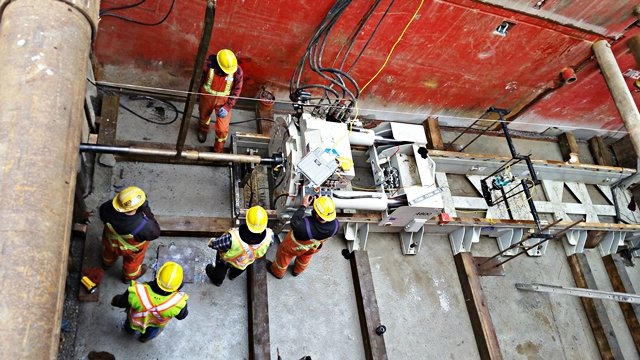 Granville Street is a major north/south arterial road for Vancouver. Due to the potential for significant transportation and emergency services disruption, the decision was made to use trenchless technology for the major sewer line crossing located on Granville Street at 33rd Avenue and 29th Avenue.

Over recent years, Vancouver, British Columbia, has experienced a rapid increase in population and urban densification.

The City of Vancouver’s Sewer Operations branch, led by David Lundberg, is one of the most unique public sector construction organizations in Canada. The department works collaboratively and draws expertise from an internal design team —in the Sewers and Drainage Design branch — that facilitates all design and project management relating to the City’s sewers infrastructure.

A team of more than 240 employees works to construct, replace and maintain approximately 2,000 km of storm and sanitary pipe. The volume and type of work that the department completes makes it similar to some of the largest design-build construction firms in western North America.

In addition to installing more than 1,200 storm and sanitary lateral connections to new homes each year, Vancouver’s Sewer Operations branch has a goal to replace 1 percent of the City’s existing combined sewer system annually. The goal is in support of the Province of British Columbia’s environmental goal to replace all combined sewer systems with separated sewer and storm drain systems on all buildings by 2050. The Sewer Separation Program will stop untreated sewage overflows from entering Vancouver’s waterways and the Pacific Ocean.

The majority of the City’s sewer infrastructure work has traditionally been completed using open-cut construction methods. In and around 2011, City crews did complete several traditional pipe bursting jobs, but due to the types of projects the infrastructure team was taking on at that moment, continued use of trenchless methods could not be maintained and drifted back to the traditional open-cut methods.

While the City’s construction and connection crews are proficient in these methods, there has been an increasing demand for a less disruptive and more efficient solution. To address this need, in May 2015, the department added trenchless technology into its operations and was successfully used in four major trenchless construction projects: Alma Street Separation Project; Telus Gardens Lateral Connection, utilizing horizontal directional drilling (HDD); East 41st Avenue and Inverness Street, three guided boring machine (GBM) lateral connections; and one of two Granville Street crossings, using large diameter pilot tube guided boring.

The Alma Street Separation Project was a major sewer separation project completed by the City of Vancouver in 2015. The project included four of the City’s engineering departments – the Project Management Office, Streets Design, Street Operations and Sewer Operations.

Along with open-cut installation, a portion of this project was identified for completion by directionally drilling two sewer pipes from West 13th Avenue to Alma Street through a park at a grade of more than 15 percent.

After completing the excavation of the launch and receiving pits at more than 5 m in depth, the installation of the two new sewer pipes was completed in just four days with minimal impact to the park. The total length  of the project was 104 m of 10-in. high-density polyethylene (HDPE) sanitary main and 104 m of 15-in. HDPE storm main.

The success of this project is directly related to the outstanding collaboration between the City’s Sewer Operations and Sewers Design teams, particularly during the critical pre-planning stage of the project. When considering low-impact and more carbon-neutral techniques, the Alma Street Separation Project highlighted how instrumental the pre-planning stage for is for success. 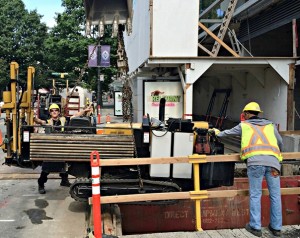 For the Telus Gardens Lateral Connection project the decision was made to to lower the drilling machine into the launch pit, and drill from inside the shored trench.

At 1 million sq ft of office, retail and residential space in downtown Vancouver, Telus Gardens is one of the largest developments Vancouver has seen in recent years. The storm drain and sanitary connection for Telus Gardens is located under one of the City’s busiest intersections – Robson Street and Richards Street.

The Robson and Richards intersection experiences particularly high pedestrian, vehicular and public transit traffic. After careful consideration and preconstruction planning, the City’s Sewer Operations branch resolved to directional drill a 300-mm and a 375-mm storm and sanitary connection across five lanes of traffic,  44 m, at a grade of 2 percent.

Due to the high traffic volumes, there were significant challenges in placing the HDD machine above ground to drill both pipes. The decision was made to lower the drilling machine into the launch pit, and drill from inside the shored trench. The same was done when the HDPE pipe was fused and pulled back into the launch pit.

The duration of the project took four weeks from start to finish, and was completed on time and on budget without disruption to traffic, public transit or local businesses. 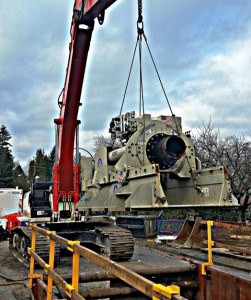 Located on a dedicated disaster response route and one of the busiest east/west arterials in Vancouver, a four-person crew from the City’s Sewer Operations branch prepared for the installation of three residential sewer connections. After analyzing the costs of previous connections on the same route using open-cut construction methods, it was determined that utilizing a pilot tube guided boring machine (GBM) to install the new connections offered cost and productivity efficiencies.

The three-step pilot tube method is in keeping with Sewer Operations’ construction goals: safety, efficiency and sustainability. The GBM is also ideally suited for the construction scope of work for lateral connections for new homes.

City crew members were trained on a 308 Akkerman pilot tube GBM machine, which was then mobilized for the new connections located at 41st and Inverness. This technology was a first for the Sewer Operations crew, and it was a steep learning curve. However, the crew learned quickly, building efficiencies with each crossing.

After the pilot tubes were pushed through to the exit pit, 14-in. augers were installed inside the casing pipe and pushed across. After the completion of the casing pipe, a 4-in. sanitary PVC pipe and a 6-in. storm PVC pipe were installed as the carrier pipes and the annular space was filled with Cell-Crete non-shrink grout. Each lateral connection was a 15 m bore at a 12-ft depth to the invert.

The crew completed the work two days ahead of schedule. Due to the success of this project, the Akkerman 308 GBM is currently being used for new lateral connections and small mainline sewer line installations.

Serving as a disaster response route, a connector to the Vancouver International Airport and a major public transit route, Granville Street is a major north/south arterial road for Vancouver. Due to the potential for significant transportation and emergency services disruption, the decision was made to use trenchless technology for the major sewer line crossing located on Granville Street at 33rd Avenue and 29th Avenue.

Tunneling sewer mainlines with an Akkerman 4800 tunneling machine was another first for the City’s Sewer Operations crews. A five-person crew excavated the launch and exit pits, and successfully set up the GBM machine with ease. However, it was immediately apparent that the crossings would be a challenge.

The crossings consisted of a 36-in. non–weld steel casing with a 675-mm fiberglass pipe as the carrier, and a 16-in. non–weld casing fitted with a 250-mm PVC carrier. The 4800 GBM was also the right machine to integrate into Sewer Operations’ construction methods. The pilot tubes crossed six lanes of traffic and boulevards (over 45 m) at a grade of 0.55 percent. A team of more than 240 employees works to construct, replace and maintain approximately 2,000 km of storm and sanitary pipe.

Once casing pipes were pushed through, the fiberglass pipe was slipped in as the carrier pipe on skids and grouting of the annular space was done. Despite minor setbacks due to unforeseen ground conditions. Even though bore logs and the geotechnical report showed ideal ground conditions for the pilot tube method, large isolated pockets of cobbles and loose sand, along with large rocks were encountered. However the crew persevered and successfully completed both crossings.

Due to the success of this project, the Akkerman 4800 GBM is currently being used for new mainline sewer line installations.

In the spring 2016, the City of Vancouver’s Sewers Design and Operations teams will embark on a major crossing over 90 m in length located at one of the busiest intersections in the City — Burrard Street and West Broadway. Sewer Operations is also planning a large sliplining project on South West Marine Drive and is considering the further development of the cured-in-place pipe (CIPP) program.

As the City of Vancouver continues to embark on infrastructure upgrades, the City’s Design-Build Construction Team is integrating advanced technology, such as HDD and the pilot tube GBM System and trenchless technology methods, to limit construction impacts to the public and stakeholders, and to generate cost efficiencies in installing long-term piping systems.

By using trenchless technology in the years to come, the City of Vancouver’s Sewers Design and Operations branches will make significant contributions toward the reduction of Greenhouse gases, helping the City meet its goal of becoming the greenest City by the year 2020.

Jasvinder Singh Hothi is Superintendent I, construction and trenchless, for the City of Vancouver’s Sewer Operations branch. Contact him at [email protected].