Every industry has been assessing how the COVID-19 pandemic and associated challenges are affecting business. While this is also true in construction and specifically the trenchless industry that is closely tied to utility work, the show goes on – that is, water and sewer services are essential and have continued. Despite the revenue loss for utilities that will need to be addressed in both the short and long term, important projects are pressing forward.

It is perhaps important now more than ever that projects are well planned, managed and executed as to avoid any unnecessary costs – and engineering can play a big role. Engineers are required to understand the full scope of a project, how to mitigate risk and know how to solve any problems that arise.

At the end of each year, Trenchless Technology examines engineering in the trenchless market. This year marks the 24th annual ranking of our Top 50 Trenchless Engineering Firms in North America. The ranking is compiled from data submitted by engineering companies via a survey. The task of compiling the revenue figures and data we ask for is not easy, and Trenchless Technology would like to thank all firms that participated in this year’s survey.

Only revenue figures submitted to Trenchless Technology were used to compile this ranking.

Before we get to some analysis, it’s important to first understand the goal of this ranking. The goal is to give readers a snapshot of the scope of work completed by top trenchless engineers, thereby offering an impression of market performance. The data we collect examines firms’ trenchless revenue relative to total company revenue, the number of employees specializing in trenchless design and the number and type of projects completed in the past year.

The top 50 are ranked by trenchless revenue in 2019 or the company’s last fiscal year. On the survey, “trenchless revenue” is defined as the total revenue generated by a firm from trenchless professional services including design, construction oversight and inspection using the new installation or rehabilitation methods you see listed in Figure 1 below.

While some discrepancies can occur, an analysis of the data and how it compares to previous years makes for a compelling look at market strength. Let’s look at the results for this year. 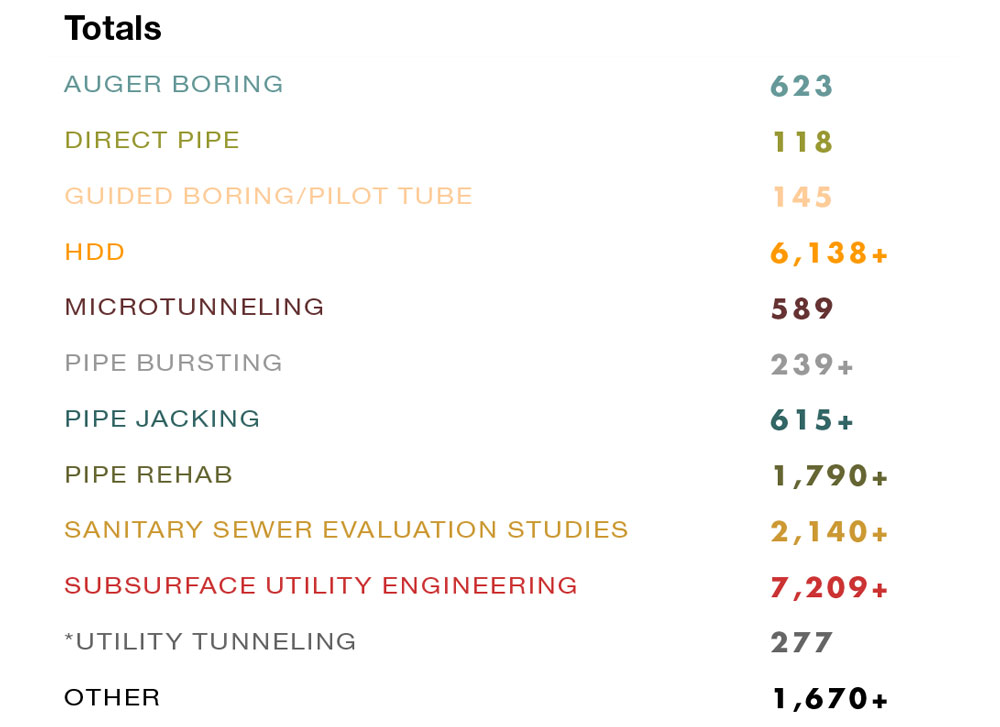 The first thing you may notice about this year’s ranking is that it’s in fact a top 51 trenchless firms – that is, a three-way tie for the 49th spot, giving us 51 total firms to make the ranking. T2 Utility Engineers (60.1 million) finishes at No. 6, the highest-ranked 100 percent trenchless firm following its separation from Cardno in 2019. It is one of only three firms to report 100 percent trenchless revenue this year (the others being BlueFox Engineering, $4.5 million at No. 43 and CAN Consulting Engineers, 2.2 million, at No. 49). NV5 enjoys the biggest jump on the list compared to a year ago. The firm acquired CALYX Engineers and Consultants in 2018 and submitted as such on last year’s survey, ranking at No. 41. NV5 ranks 14th this year. Hubbell, Roth & Clark Inc. also experiences a notable jump from last year, moving up 11 spots from No. 45 in 2019 to No. 34 this year.

There are also nine firms in the 2020 Top 50 that did not make the ranking a year ago. What Do the Results Say about the Industry?

Overall, the 2020 figures – which, again, refer to revenue in 2019 or the company’s previous fiscal year – continue to show stability in the trenchless market. Historically, the results of Trenchless Technology’s Top 50 ranking have included engineering companies that range dramatically in size. Some are among the largest engineering firms in the world and others are smaller, more specialized firms. For example, three firms report trenchless revenue of $100 million-plus while 20 firms report trenchless revenue of less than $10 million.

The results from year to year can be affected by several factors, such as mergers and acquisitions. Additionally, some firms may not submit revenue figures to Trenchless Technology, keeping them from making the ranking. It’s worth pointing out that Mott MacDonald, which ranked No. 2 and No. 3 in 2018 and 2019, respectively, elected not to participate in this year’s survey. Another major component of Trenchless Technology’s survey is the number of projects completed in the past year. The reported figures reveal more than 20,500 trenchless projects collectively for the Top 50. This is a positive trend as about 17,000 projects were reported among the Top 50 last year.

As you can see in Figure 1, we also collect data on projects by trenchless method used. Those totals should be viewed as rough estimates. Some firms will check multiple methods for a single project if it has multiple trenchless components. Therefore, the Projects by Method breakdown in Figure 1 is an accurate depiction of trenchless methods being used, but may overstate actual project totals. Also, some firms disclose to Trenchless Technology that while they track which projects are trenchless, they do not track by specific discipline or method. This may result in a project total included on the ranking that is not reflected in the Figure 1 totals.

Submittals from engineering companies are imperative to making Trenchless Technology’s Top 50 ranking as comprehensive and accurate as possible. If you are a trenchless engineering company and would like to learn more about how to participate, please contact Sharon Bueno, managing editor, at [email protected].

Andrew Farr is a contributing editor to Trenchless Technology.