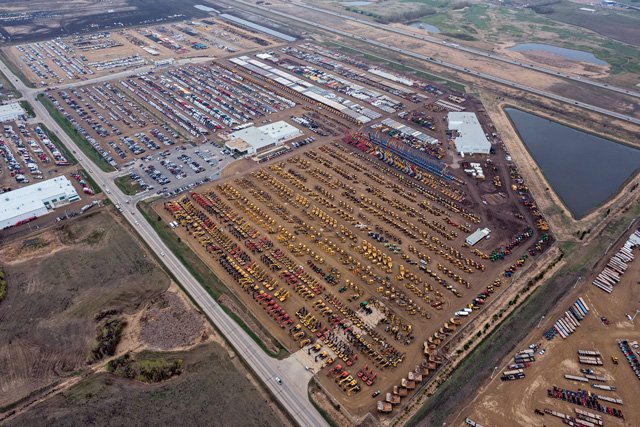 With winter on its way, many Alberta contractors are realigning their fleets for winter work, making it a perfect time for another Ritchie Bros. auction. More than 10,600 people registered to bid for the company’s latest Edmonton, Alberta auction, held Oct. 25-28.

More than 8,000 equipment items and trucks were sold in the four-day auction for more than $96 million (USD) (more than $129 million (CAD)). Approximately 88 percent of the equipment was sold to Canadian buyers (by dollar value), including 53 percent sold to Albertans.

About 10 percent was sold to U.S. buyers. Online buyers purchased 60 percent (more than $57 million (USD) or more than $77 million (CAD)) of the equipment.

“With record attendance for October, nearly every construction and transportation equipment category performed well,” said Brian Glenn, senior vice president, Ritchie Bros. “Customers are upbeat and were pleased with the level of bidder activity and the pricing we achieved. We have one more Edmonton auction scheduled for 2016 in December, and encourage anyone interested in selling assets before the end of the year to contact us. We already have a couple of large dispersals lined up.”

“I’m retiring after 43 years in business and came to Ritchie Bros. to sell my entire fleet,” said Gary Carter, owner and president of Gary Carter Excavating. “I’ve purchased from Ritchie Bros. in the past, but this is the first time I’ve ever sold. Traditionally I would sell equipment myself, but it takes forever and you have a million people walking through your yard. Selling with Ritchie Bros. was quick, easy and the results were even better than we expected. I would highly recommend selling with Ritchie—they are helpful and organized, and reach a worldwide audience.”


A complete list of auction results for the last two years is available at the Ritchie Bros. website.

Ritchie Bros. will conduct its final Edmonton auction of 2016 on Dec. 7-8. Anyone interested in adding their equipment to the auction should contact the auction site at 780-955-2486.