Mike Burkhard has spent his entire 45-year career devoted to the well-being of our underground infrastructure and the betterment of trenchless technology.

And he is passionate about trenchless technology — illustrating that point by describing it as his hobby.

“Some people play golf, but my true hobby is trenchless technology,” Burkhard says. “I live for it.”

And he wouldn’t have it any other way.

A self-proclaimed analytical geek and prolific reader of all things trenchless, Burkhard has donned many hats along his trenchless career: researcher, product developer, manufacturer and leader of a valued industry association. He has had a long and distinguished career, proving to be a trenchless advocate, as well as a pipe relining visionary who helped to introduced UV cured-in-place pipe (UV CIPP) to North America.

With each step of his trenchless journey, he left a lasting impact while continuing to blaze new paths to make trenchless technology better and push its growth forward. He worked at the Washington Suburban Sanitary Commission (WSSC) for 15 years before turning to consulting. He would then become executive director at NASSCO, leading it back life from the brink of no return. Today, he works with Reline America (now a part of RELINEEUROPE).

For all of his contributions to the trenchless industry, Mike Burkhard is the 2019 Trenchless Technology Person of the Year.

His reaction to the news left him speechless and humble. “I am absolutely stunned,” Burkhard says. “I am truly honored.”

Burkhard grew up near Morgantown, West Virginia, before moving at age 14 to the Washington, D.C., area. When he graduated high school in 1968, He had a choice to make: work with his dad in the family business or enroll in college. His decision proved to be a pivotal moment in his life. At that time, the United States was embroiled in Vietnam and the draft (not the lottery) was in place.

“My dad wanted me to work with him in his business, which was designing and building steel buildings. And I agreed,” Burkhard says. “But because I didn’t go straight to college (after high school), the draft board came for me six months later. And that’s how I ended up in the Army instead of working with my dad.”

After routine aptitude testing by the Army, Burkhard escaped being sent to Vietnam. Instead, he was placed in a chemical, biological radiological warfare school, assigned to do materials testing and development. From that experience, Burkhard honed a process of thinking that he carries with him to this day. “It was a process that cemented my way of thinking and my love of thinking,” he says. “The Army was where my love of the whole process of [developing and testing materials] came about.”

Burkhard served in the Army from 1968-1970 — or “One year, 10 months and two days to be exact,” he says — returning home to start the rest of his life. Afterward, Burkhard landed a job at (WSSC) at a time when utilities were beginning to understand the importance of I/I. After working in WSSC’s Research Division under the tutelage of Dr. Al Machis, a civil engineering Ph.D. from Johns Hopkins University, Burkhard was promoted to rehabilitation manager, in which he learned how to approach research from a project management mindset. In 1981, an EPA managed and directed first exposure to I/I nationwide held in nine cities. Mike Burkhard is in the top row, left.

Fifteen years at WSSC allowed Burkhard to see first-hand the emerging trenchless technologies of the day, including pipe bursting, grouting, spray-on products and a variety of lining products. Burkhard developed a pilot research program to validate these technologies and was deeply involved in partnership with the Water Research Centre (WRc), which at the time was the research center for all 10 water authorities in England.


Through that partnership, WSSC was able to bring new technologies to the United States. In fact, Burkhard, as rehabilitation manager, was witness to one of the first Insituform installations stateside — in Beltsville, Maryland, on Halloween night in 1979. During his time at WSSC, Burkhard participated in the introduction into the United States of the new technologies of pipe bursting, Danby, Ribloc, Insituform and Inliner.

Subsequent to leaving WSSC, Burkhard gained experience in the industry working with U-Liner Systems where he was charged with marketing and patent strategy, and expanded his knowledge base when he decided to branch out on his own as a consultant to companies looking to grow both domestically and internationally, as well as helping companies facing dire financial situations.

In 1999, Burkhard was asked by then NASSCO president Jerry Botts to help the organization recover from crippling financial difficulties. Seeing that a healthy organization needs competing companies and products, Burkhard wrote new by-laws to include not only contractors but municipalities, consulting engineers and manufacturers, helping lead NASSCO from the brink of bankruptcy to the vibrant organization that survives today.

He also helped launch NASSCO’s signature program: Pipeline Assessment Certification Program (PACP), which has grown into the North American standard for pipeline defect identification and assessment, providing standardization and consistency to the methods in which pipeline conditions are identified, evaluated and managed. He also established the Television Equipment & Manufacturing Division (TEMA), as well as a Pipe Bursting Division.

“I loved the challenge,” Burkhard says of his years with NASSCO. “The members were outstanding and were all-in on the changes and, most importantly, NASSCO was absolutely worth saving.”

After three years, Burkhard believed it was time to move on. He says he left NASSCO in a much better position than it was when he arrived and the opportunity to work with a good friend and industry-changing technology was too good to pass up. The next step was in front of him.

Burkhard and Reline America co-founder Don Pleasants first met in 1990 and had been researching for several years a trenchless process that they could, together, bring to the U.S. marketplace. The two eventually found the spirally wound, ultra-violet cured fiberglass technology in Germany — offered by Brandenberger — that we have come to know as UV CIPP. “We liked the high structural capabilities, the environmentally safe emphasis and the high-quality technology of the process for both the liner and installation equipment,” Burkhard says.

This was in 1998 and the UV CIPP process, though gaining strength in Europe, was still too expensive to succeed in the U.S. market, Burkhard says. Brandenburger, Burkhard and Pleasants revisited the partnership in 2003, with all parties believing the product was within striking distance in terms of cost to market in the United States. By May 2005, the pair had signed an agreement with Brandenburger for the UV CIPP technology’s exclusive North American rights. Reline America was open for business in Virginia by 2007.

Slow to catch on, the technology over the last several years has become a force in the pipe relining market. Recently, Reline America signed a joint venture with the RELINE UV Group, under the leadership of RELINEEUROPE, with the latter acquiring 50 percent of Reline America. Reline America, in turn, now has access to the more extensive RELINEEUROPE product line.

“In a nutshell, I am intrigued by the entire process of developing and evolving technologies, as well as the ability to optimize their final application. This includes testing that takes place initially to approve and define the product for use and tests after installation that correctly assesses the products for acceptance,” Burkhard says. “All of these areas are fluid and in a constant state of evolution. In other words, the job of making processes, equipment, etc., better is never done. That is exciting.

“When you look at the trenchless technology industry as a whole, you’re looking at an industry that is growing, emerging and maturing. The industry continues to mature and products and processes get better because of the competitive nature of business. I believe the trenchless market is just growing out of its infancy and will have much more to offer in the future. The exciting part of this growth to me is the maturation of the machine and software automation of the processes, materials and equipment development and the sequencing, analytics and costing involved in all.” In 2007, this was the very first Reline America UV contractor certified training with Abel Recon.

Burkhard has been working to improve our underground infrastructure for 45 years and says he’s had a ball every stop he’s made but there’s one he gives the edge to and the reason should not surprise anyone who knows him. “I’ve had a lot of fun in every place I’ve been but the place I felt I enjoyed the most was WSSC,” he says. “At a municipality [like WSSC], they are drivers of our industry. The biggest driver out there is the water and sewer work in the municipalities and working for [WSSC], I did a lot of things, such as finding grant money, working in cooperation with the EPA, research and development. I was able to engage in many aspects of research and development analytics on a variety of topics. The wide variation of topics was very exciting I learned so much. I believe that learning process was the best part. ” 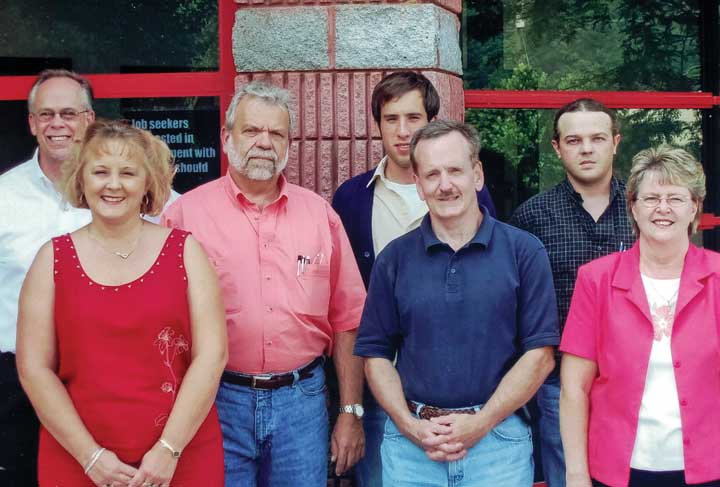 2006 Reline America startup, with the first group of employees.

When Burkhard is not immersed in all things trenchless, he is spending time with his wife of nearly 38 years, Lisa, and his four children Jenifer, Ryan, David and Nora, as well as their grandchildren Cassidee, Greyson, Alyssa and Polina. He was taken aback and surprised when revealed to him the honor Person of the Year, saying he really didn’t know what to say. He typically shuns the spotlight, rather wishing to point to others instead of himself. “I can think of 30 people who are more deserving than me. I’m truly honored,” he says. Mike and Lisa Burkhard at the 2008 No-Dig Show.

But for his final thoughts on being named the 2019 Trenchless Technology Person of the Year, Burkhard makes it clear that there is more to come from him to the industry he loves so much. “I’m not done yet,” he says. “I enjoy the analytics and the process itself. Regardless of whether you are working for a municipality or trade association, consulting firm or manufacturer. It always comes down to the thought process of how to get from A to Z. It touches every one of those areas.”