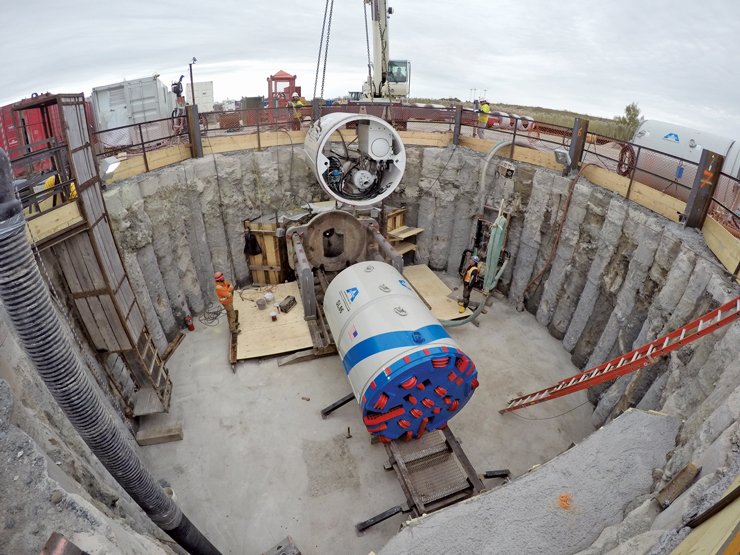 The value of microtunnelling was on display at Lester B. Pearson International Airport in Toronto recently for the completion of the Twinning of the Etobicoke Creek Trunk Sanitary Sewer project. The project was needed by the Region of Peel to complete a critical infrastructure link underneath runways and taxiways on the airport grounds.

Naturally, the Greater Toronto Airport Authority (GTAA), which manages the airport, could not allow major disturbances to its operations, especially considering that Pearson is the busiest airport in the country. To build the critical new sewer and maintain air traffic, Peel and its consultant, Hatch Mott MacDonald, turned to microtunnelling as the solution. In April 2015, the joint venture of CRS Tunnelling Inc. and Dibco Underground Ltd. was low bidder on the $16.7 million project. CRS Tunnelling, the Canadian arm of Super Excavators, specializes in mechanized tunnelling, microtunnelling, sliplining and open-cut construction. CRS has successfully completed several tunnelling projects, in Ontario, since its inception over two years ago. CRS is based in Oakville, Ontario, and bids projects throughout Canada. CRS constructs tunnels ranging from 0.76 m in diameter up to 7 m (23 ft) in diameter; in either soft (slurry/EPB) or hard rock conditions.

The roots of the project date back to the late 1990s when the Region of Peel developed its water and wastewater master plan that identified the need from twinning of its main trunk sewers to allow redundancy. The Etobicoke Creek project under Pearson Airport, in fact, was the last link in the twinning of Peel’s two main trunk systems.
The project involves the construction of approximately 576 m (1,890 ft) of 1,800-mm (70.8-in.) internal diameter sewer underneath Runway 23 and Taxiways J and H. The ground conditions included granular till and riverbed deposits near the entrance shaft, and shale bedrock along the majority of the alignment. Some fill material placed during airport construction was also a possibility.

Project engineers called for a new or newly refurbished microtunnel boring machine with new cutting tools and hard facing. Additionally, the machine was specified to include the ability to perform compressed air intervention at the face to change tooling if needed.

“Shortly into the microtunnel drive, we would no longer have the ability to perform any excavation to access the machine until we reached the reception shaft,” said Marc Gelinas, principal project engineer, Hatch Mott MacDonald. “Because of the risk, the mitigation measure was to have the ability to perform tooling changes from inside the machine. Typically that is not an issue within shale bedrock, but we were tunnelling near Spring Creek and there was potential for encountering creekbed deposits and ground water.”

But, before anyone could think about tunnelling, project engineers needed to coordinate with GTAA, as well as Navigation Canada, to obtain all the necessary approvals and permits to build a tunnel on the airport property.
“Pearson is an international airport and naturally security is a very high priority,” said Ajay Puri, senior project manager of Wastewater Capital Works, Region of Peel. “It is very different from working in a roadway right of way or private property. We had to coordinate and deal with height limitations of the construction equipment and setback requirements from the runways and taxiways. It was a long, but necessary, part of the project.” Once operational, the new sewer at Lester B. Pearson International Airport in Toronto will provide added capacity running in parallel with the existing 1,650 mm sewer already under operation. The Region of Peel will have the ability to use either or both of the twinned sewers at any time.

Prior to beginning any work onsite, a detailed Facility Alteration Permit (FAP) was required to be obtained in which the general  contractor provided details of its environmental, health and safety plan, operations plan and understanding of all permit requirements in order to meet the airport construction code. Any traffic going inside and outside of the construction compounds was required to be escorted with an airside service company and all construction access gates were also manned by security. All lifting devices and equipment heights were required to be approved by Navigation Canada prior to being permitted to be used on site in order ensure conformity to Instrument Landing Systems and clearances to aircraft in the nearby vicinity. Tunnelling activities were staged from the Spring Creek Valley area east of Taxiway H, with the MTBM passing underneath Taxiway H, Runway 23 and Taxiway J. The project also included the construction of four new maintenance holes and modifications to two existing maintenance holes, including all associated appurtenances and fittings, and temporary bypass pumping as necessary to complete the works. A temporary bypass road was built within the airport as one of the existing service roads needed to be taken out of commission as the receiving shaft and sewer connections fell directly beneath the service road.

The launch shaft for the MTBM was built using a secant pile shaft while the exit shaft utilized a rib and board type shaft. The tunnelling portion commenced on Oct. 27, 2015, utilizing a new SL86P MTBM manufactured by Akkerman Inc. Akkerman’s new AZ100 Total Guidance System provided navigation control for the long-distance microtunnel. The pipe, manufactured by Decast (formerly Munro), was designed with silica fume additive to increase its density and impermeability. “Because of the limited accessibility of the area, we wanted to ensure that we had the most robust and durable pipe possible,” Gelinas said. After several sections had been jacked and the process had been streamlined, a continuous 24/7 operation was established in order to complete the tunnelling works as efficiently as possible while minimizing impact to the GTAA operations. The 576-m long microtunnel drive was completed on Dec. 3, 2015. Anticipated completion of all work is expected to be early summer. Remaining work includes making connections to existing sewers and site restoration.

Once operational, the new sewer will provide added capacity running in parallel with the existing 1,650-mm sewer already under operation. The Region of Peel will have the ability to use either or both of the twinned sewers at any time. This will allow flow to be diverted into one sewer and allow inspection or rehabilitation of the other.