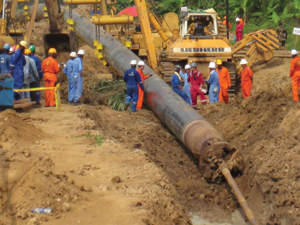 The project took them from North America to Yenagoa, Nigeria, to complete what they say is the largest HDD project to date in the African country — a project they hope will continue to spur future HDD projects. Population of the Nigerian capital city has approximately 150,000 people and construction activities in Yenagoa have accelerated there since it was tapped as the capital city in 1996.

One such project is the Shell Petroleum Development Co.’s (SPDC’s) Eastern Gas Gathering System Phase II (EGGS-2) Pipeline project, which was recently completed. The final leg of this extensive 58-km project involved a 760-m (2,493-ft) crossing in the City of Yenagoa to install a 40-in. steel gas line with 1-in wall thickness. To complete the bore, crews needed to drill the pilot bore under less than ideal conditions, including a 300-m blind section that was home to a community fishing pond. Frisch’s work on the project began in late October 2009 and finished in January 2010.

“HDD in Nigeria was different than any other project we have conducted to date,” Wiebe said. “HDD is relatively new in Nigeria and, because of this, there were struggles throughout the project. And because not many HDD projects have been completed in Nigeria, there was much skepticism, followed by a major learning curve for many of the parties involved in regards to bore support, including personnel, equipment, parts, timeline, as well as various other aspects we normally take for granted on projects of this.”

Frisch said his company, Layne Change International, based in Alberta, Canada, has done HDD work overseas. But for this particular project, he was contacted by the pipeline contractor Enikkom Investment Services NIG Ltd., which has done a lot of the HDD work in Nigeria. Enikkom wanted to bring him and his team on as a consultant to get the project completed, as crews were having difficulty drilling the pilot bore.
“We headed over there in late October 2009 and were to serve as consultants to the project,” said Frisch. “But once we were there, we ended up taking over the actual drilling and project itself. In fact, I ended up steering [the rig] on the pilot hole.”

Wiebe served as project superintendent/rig manager/project manager, Chris Bunnik was the mud man, Brian Gindt was the driller/site manager and Tracey Truax was a driller.

Due to the rudimentary site and support conditions, the pilot bore took over three weeks to complete. Crews used an American Augers DD-625 drill — a surface-launched, fluid-assisted, mechanical HDD system, capable of handling 625,000 lbs of thrust/pullback. And all of that would be needed to pull in the 1 million-plus-lb weight of the welded 40-in. steel pipe when the time came. Frisch engineered the pullback procedure, constructing a 500-m floatation ditch to substitute for lack of proper pipeline rollers for the pipe.

“We were wondering if [the rig] was going to be big enough,” Frisch said. And they were to learn that it was, with the assistance of the floatation ditch.

The soft ground was a mitigating factor in the number of frac-outs previous crews battled in past attempts to drill this bore. In order to support the hole during drilling of the pilot bore and to maintain drilling fluid flow, Frisch and his team decided to install steel casing for a 50-m section on the entry side of the bore.

Unfortunately, the largest they could obtain was 24-in. casing, which would later hinder the speed of the four reaming passes as three of the four were much larger than the 24-in. diameter casing. Frisch noted that the crews would ream until they reached the casing and then pushed the reamer back to the exit location, leaving the casing and hole in tact.

“This resulted in a lot of extra time being taken to complete the reaming operations,” he said, noting it took two months.

Limited access and egress to the exit location created other challenges and prevented crews from being able to set up the necessary equipment for the mud handling and reaming operations. In order to keep flow back to the rig, a 6-in. mud line was drilled 5 m to the north and parallel of the proposed 40-in. drill path. The mud line served a second vital purpose, as it allowed Frisch to feed into it the necessary tracing wire to drill through an area in which crews didn’t have access to — a 300-m section that included a community fishing pond, a two-lane highway and a creek. 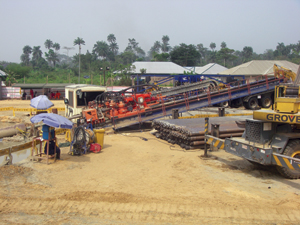 “A reclaiming unit was built on location to pre-clean the fluid returns obtained on exit and pumped back to the rig via the 6-in. mud line. The pilot hole for the mud line was drilled using a Paratrack Magnetic Guidance System and the 300-m “blind section” was drilled off of a calculated azimuth,” Frisch said.

Once the mud line’s pilot bore was drilled and 6-in. line was installed, 10 gauge wire was run through the 6-in. line and used as the surface coil, in effect, eliminating the 300-m blind section and allowing crews to have surveys of each joint as it was drilled through what would have been the blind section.

“This was essential in order to eliminate all magnetic interference in the area and to make absolutely sure that no horizontal radius restraints were broken while drilling the pilot hole for the 40-in. steel pipe. The designed radius for the bore was to be 1,700-m radius, with a minimum radius of 1,200 m,” said Frisch.
Pullback of the steel pipe took approximately 14 to 16 hours, Frisch said.

When the project was finally completed in January 2010, SPDC, the general contractor Daewoo Engineering and Enikkom Investment Services Nigeria were all pleased with the outcome. “This was the last leg of a major pipeline installation. The HDD portion had been started and running in one form or another for approximately six months before we arrived,” Wiebe said. “So you can imagine how happy they were to have this final step for their pipeline completed.”

Wiebe believes HDD will eventually become a widely used method of installation in Nigeria in the years to come. “HDD will surely be a part of Nigeria’s future construction projects,” he said. “It will not only be used as a less intrusive method of pipeline installation but also aid in burying aboveground pipelines, which currently present a danger due to vandalism, attacks and groups tapping into hot lines.”

Working in the unrest of Nigeria is an experience that Frisch and his team won’t soon forget, after spending nearly three months in his volatile country. Language and culture are always an issue in projects such as these but the potential for violence in their surroundings made for a more stressful work environment. “There was a major learning curve for us, the expats,” Frisch said. “The people were more often than not, very welcoming although they do live everyday life differently from what we are used to and kept us on our toes all the time. We were not able to travel anywhere, not even from entry to exit sites without Mobile Police and/or the Joint Task Force — their military that carries sub machine guns. Oftentimes, we felt there was no need for this but we did experience the occasional event that would remind us of why we had escorts.”

Overall, Frisch and his team were proud to be a part of such an undertaking that means so much to Nigeria and brings the HDD technology to more areas to show its benefits.