As the trenchless industry grew, family-owned manufacturing companies dotted the landscape. One of those that has stood the test of time — and is on top of the fusible plastics world — is McElroy.

The Tulsa, Oklahoma-based company celebrated a pair of milestones in 2019 – its 65th year and its 50th year as an integral cog in the thermoplastic pipe fusion industry. McElroy has come a long way since Art and Panny McElroy started the business as a custom fabrication shop in their small garage. Chip McElroy operates the first TracStar 500 on a jobsite.

As the company experienced its growth – now with 315 employees and sales offices in Australia, Chile, India and the United Kingdom – one thing has remained constant: A fierce loyalty to Tulsa.

“We’ve traveled the globe and we still haven’t found any place as favorable to business, or as geographically beneficial to our business as Tulsa,” says Chip. “Tulsa is home. Our roots run deep here.”

The family is so intertwined with the city that Chip says he and his siblings have a hard time separating the family from the business and the business from the family. “I don’t want that to be heard as a negative. It is actually part of the secret sauce,” Chip says. “We have a real passion for what we do. We have a deep care for the employees who make it possible and the channel partners and our customers who ultimately wind up blessing us with orders, ongoing business and further opportunities.”

That family character is something that is easily transparent to McElroy’s channel partners, customers and all those who deal with the company from the industries that it serves – and more importantly to McElroy’s employees.

“All of us, as employees, feel like we are treated like family,” says Jim Johnston, vice president and chief technology officer. Johnston has been with the company for 26 years. “It is an extension of that family that is the basis of many of the business relationships that go back to the 1960s, 1970s and the fusion world in the 1980s when the channel partner distributors first started coming on. That family feel from management down drives the ongoing relationships.”

Art McElroy, then the vice president of sales at a prominent shell and tube heat exchanger company in Tulsa, got the push to start the business from his boss.

“My dad came back from World War II where he served as an officer in the United States Navy and wound up working for this gentleman here in Tulsa,” Chip says. “It was a family business, and he [the owner] recognized that my dad had a lot of gifts. He encouraged my dad and my mom to go and do their own thing.”

The couple bought a sheet metal shear and an apron break, and McElroy was born in 1954. The first projects were small enclosures, assemblies and other specialty fabricated products for the various companies in and around Tulsa.

“My dad ran it as a second job until 1961 and mom always considered herself the first employee,” Chip says. “She is the one who held it all together, managing the finances and taking care of everything in those early years.”

The pivotal moment that would lead McElroy into the trenchless world can be traced to 1969. Knowing Art’s design and problem-solving prowess, some former petrochemical customers came to him with a problem. They were working in R&D for Phillips Petroleum and had this new thermoplastic piping product and were trying to make a market for it. But, the available equipment on the market for welding their polyethylene pipe did not work with the high-density resin that they created.

“Phillips, which we know today as Performance Pipe, was working with this remarkable plastic called Marlex,” Chip says. “It was really the world’s first commercially successful high-density polyethylene (HDPE) pipe.”

McElroy designed its first pipe fusion machine in 1969 and between 1969 and 1973 it developed a line of equipment that could fuse from half-inch tube size pipe up to 48 in. in diameter.

In the 1980s and 1990s, the fusion products gained steam. Today, Chip estimates 90 percent of McElroy’s business is in the thermoplastic pipe fusion world. Of that, the bulk of it is in the underground construction sector, which includes trenchless technologies. McElroy’s fusion machines have been used on many award-winning trenchless projects like the 2017 Trenchless Technology Project of the Year New Installation Runner-up for the City of Miami Beach, Florida.

Whether it be sliplining or horizontal directional drilling (HDD), seeing a McElroy machine on a trenchless project is not a rare occurrence. While it is hard to pinpoint the exact time of its first involvement, the McElroy name has been a part of the trenchless industry since its early years.

“I think about our great friends at Ditch Witch and Vermeer and when you look at what they started doing with the rod pulling or pushing units back in the early- to mid-1980s and then you move into what they started doing with directional drilling, all of those early applications of trenchless, I would argue nine times out of 10 involved pulling back or installing polyethylene pipe,” Chip says. “Whether it was the yellow gas pipe or black pipe for other applications or some of the orange pipe used for fiber optics, I would say that when it came to installing pipelines with trenchless technology, polyethylene was there at time zero.”

And there was a point in time that McElroy ventured into more than the fusion side of trenchless. In 1992, it licensed technology from Brooklyn Union Gas, now part of National Grid, to split pipe and pull back new polyethylene pipe with a tool called the BULLET. “It was a cool technology, but as HDD came into its maturity, HDD became the preferred way of upgrading and up-sizing gas lines,” Chip says.

On the sliplining side, Chip estimates that McElroy’s involvement goes back to the mid-1970s. “I would say it was the sliplining that gave way to the pipe splitting and expansion and what they learned from going pit-to-pit was revolutionized by what HDD has brought to the forefront,” he says.

Along the way, McElroy’s machines have been used on trenchless projects of all sizes across the globe. Several of them have been “record setters” and many have graced the pages of Trenchless Technology as annual Project of the Year winners. With 35 years at the family business, does Chip have one stand out trenchless project he can recall?

“I am going to date myself a little bit, but I was heavily involved with our pipe splitting effort and I have memories of being everywhere from Long Island to places in Ohio and into Tulsa. We were working on pipelines that dated back to the synthetic gas of the 1920s, and that pipe hadn’t been unearthed in 70-plus years,” he says. “Seeing the ballet that happened between the sending and the receiving pits. We pre-joined all of the polyethylene, split the pipe and pulled it back in.”

More recently, and on the other side of the pond, McElroy’s fusion machines have been spotted on many of the United Kingdom’s major gas infrastructure updates.

In 2003, Chip was standing on Piccadilly Road watching TracStar 500s fusing up 315- to 400-mm gas lines. And there is the time he saw the TracStar 900 working near Buckingham Palace fusing pipe. “It’s cool to see our equipment working outside of the United States and taking part in such high-profile applications,” he says.

For Johnston, the first thing that comes to mind when discussing stand-out projects is the 2017 Trenchless Technology Project of the Year New Installation Runner-up. The project, for the City of Miami Beach, Florida, was completed by David Mancini & Sons and ISCO Industries. It involved the installation of a 54-in. HDPE force main 40 ft below ground. For the fusion, ISCO Industries used a MegaMc 2065, the largest McElroy machine at that time.

“When you look at everything about that project, from how well it went, to how big that pipe was, it really stands out to me as one of those spectacular projects.” Johnston says. “There are a lot of really cool projects that are out there, but that is the one that jumps to my mind first.”

Record-setting and noteworthy projects would be impossible to be a part of if the machines did not work as intended, were difficult to use or the operators weren’t properly trained and certified. These are all areas where the McElroy team excels.

Chip points out that when you look at a piece of equipment from McElroy, it is designed in a way that using the machine is something that an operator wants to do. 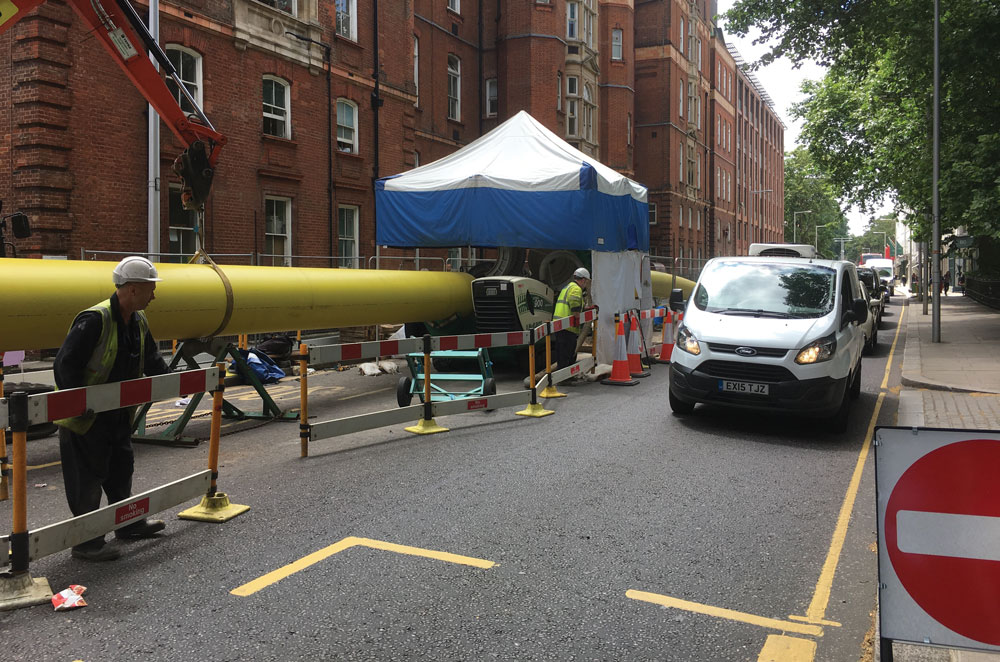 McElroy fusion machines can be found all over the world. Here, contractors fuse up 800 mm pipe on the streets of London.

“Technology becomes the next level of acceptance. We have industries that are now accepting polyethylene and other fusible plastics. This is new to them, but for the rest of us, this product has been around 60 years,” Johnston says. “For those ‘new’ industries, they want to see affirmation and confirmation and have quality control. The technologies in the machine do that.”

“We have a changing demographic overall in terms of the employees [using the machines] they are both newer and more technologically accepting. Technology brings the ability to help guide the new operators,” Johnston says. “From a training and applications standpoint it opens up the ability to do training, refreshing or guided-type work in the field vs. the traditional hand-operated equipment.”

Johnston likens today’s fusion work to being in a machine shop, there are still a lot of people who run a drill press or manual mill, but by and large CNC machines have taken over a lot of those functions. Even with CNC equipment, the shops still need trained and educated operators, but a lot of the work is done by the machine. At this stage, the operator is relied upon for their discernment and capability vs. their physical aspect of managing the machine.

Using advanced technologies simplifies the fusion process and makes it more palatable and reliable and more accessible to the market. This is key as the current stable of qualified pipe fusers – many of whom have been involved for 30 to 40 years – are looking to retire.

“Industry wide, whether its plastics pipe groups or contractors’ associations, we are all focused on how to train and qualify individuals to do the work,” Johnston says. “We are involved with trade organizations in helping establish what those standards are, how to identify people to train, how to train.”

McElroy University is key to that training and is open to anyone who wants to learn how to fuse. Training, a combination of online and hands on experiences, is primarily in Tulsa, but McElroy offers onsite training through its channel partners across the globe. Many of those partners have a certified McElroy trainer on staff and they hold fusion training at their locations. There are also other industry partners that have certified McElroy training and can perform training in the field.

And McElroy University has evolved beyond operator training and machine maintenance to include inspector training. This is for people who might not fuse a pipe, but they need to understand fusion. They need to know if they are looking at a good fusion, and how to interpret the rules, the regulations and the standards.

With the continuing evolution of McElroy’s equipment, DataLogger and training, as well as the thermoplastic pipe fusion world, it’s easy to get excited about what the future holds. And the team at McElroy are ready to go.