CIPP Market: Nearly 50 and as Strong as Ever

Since the time it was introduced nearly 50 years ago, cured-in-place pipe (CIPP) has grown to become a staple of the trenchless industry – and the reasons are obvious. By using CIPP, utility owners can get a leak-free, corrosion-resistant new pipe with little disturbance to the public, often for cost compared to traditional methods. It is no wonder that CIPP has been used to rehabilitate hundreds of millions of feet of pipe throughout the world.

Over the years the CIPP industry has evolved. What began as a simple idea has blossomed into a multi-national, multi-billion-dollar industry. CIPP lining, once viewed as a specialty application, is now done in cities large and small on a daily basis.

And there are certainly no signs of a slowdown in the market any time soon. The need to update aging infrastructure is apparent in cities across North America. The often-cited ASCE Report Card grades U.S. Wastewater Infrastructure as a D+ and Drinking Water Infrastructure as a D. CIPP and other trenchless rehabilitation methods no doubt will play a key part in helping utilities address the challenges.

“The trenchless industry is strong, and becoming even stronger,” said Jason Schiro, CIPP product manager for Interplastic Corp., a leading resin supplier for the CIPP market. “As municipalities continue to invest in their infrastructure, trenchless has an expanding role in their projects.” 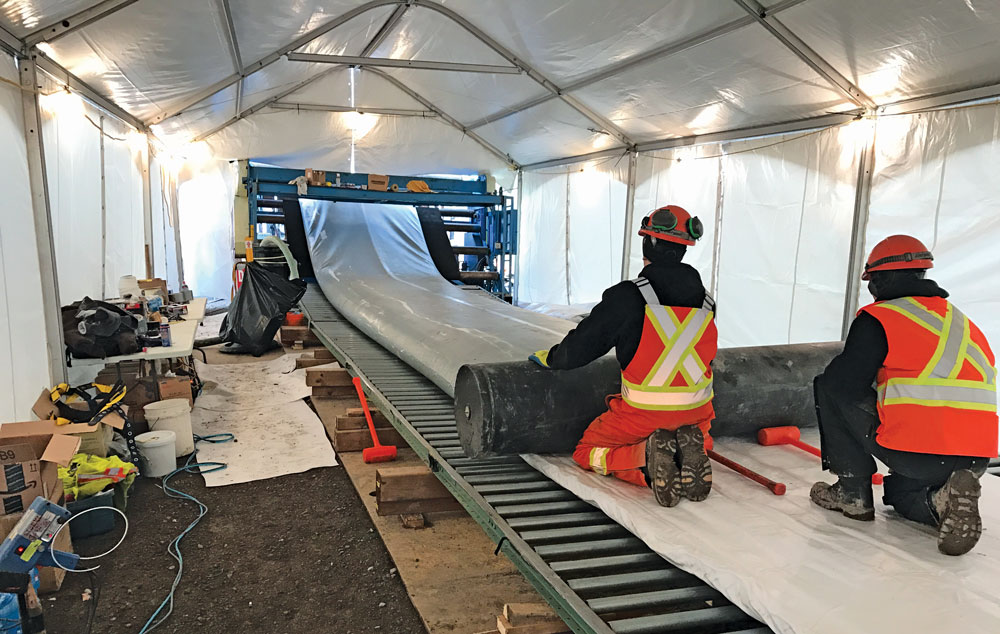 Site inspection staff in Hamilton, Ontario, are able to recognize potential technical problems in the field, from resin mixing, to impregnation and curing parameters. Much of this knowledge has come from custom internal development of a CIPP Lining Manual, as well as training materials and instructional sessions.

Cured-in-place pipe was invented by Eric Wood, founder of Insituform, with the first installation occurring in a London sewer in 1971. In 1976, CIPP was introduced to the United States with an installation in Fresno, California.

Insituform, now headquartered in Chesterfield, Missouri, held exclusive patents on the technology until 1994. With the expiration of the patents, an influx of competition occurred that helped to expand the market.


Early challenges in growing the CIPP market included educating owners and engineers about the capabilities of the method – a challenge that remains to this day.

“We still see a lot of misunderstandings about the technical envelope of CIPP,” said Lynn Osborn, a consultant and Technical Director of NASSCO. “The level of understanding is improving, but there are still people who don’t know what is possible with CIPP in terms of lengths or diameters. There are also misconceptions regarding the process itself, including the amount of time it takes for preparation and installation when rehabilitating large pipes.”

“We are starting to see large municipalities specify that inspectors for sewer rehab jobs are NASSCO certified – whether the inspector is their own employee or a consultant,” Osborn said. “When the inspector has a more in-depth understanding of the process, it leads to a better project for everyone.”

Cities including New York and Columbus, Ohio, have had their employees attend NASSCO and NASTT training events, as well as Municipal Forums hosted by Louisiana Tech’s Trenchless Technology Center (TTC). These events vary in content and structure, but are all led by recognized industry experts.

While the early days of CIPP were focused on education and acceptance of the method, recent technical advancements have broadened the technical envelope and expanded beyond the traditional gravity sewer market. Specifically, advancements in technology are allowing rehab of pressure pipes, including drinking water mains pipes and sewer force mains. Another area of development has been in UV-cured CIPP, which is beginning to gain momentum in the North American market.

To get a sense of how CIPP is being deployed in the field, Trenchless Technology talked to Nick Domenick of the City of Columbus, Ohio; Tom Wynne of New York City’s Department of Environmental Protection; and John Struzziery of the Town of Hull, Massachusetts.


Columbus, the 14th largest city in the United States, is in the midst of its “Blueprint Columbus” program to address inflow and infiltration (I/I) in city sewers with the goal of reducing overflows. The city has had a steady program of CIPP dating back about 20 years, but is ramping up its use of relining.

“The use of CIPP is increasing for us as we are now addressing laterals,” Domenick said. “The mainline work has remained steady over the years but by addressing laterals there is going to be an expansion of the magnitude of work that we are bidding each year. We will be bidding several thousand laterals per year.” Domenick says improvements in lateral rehab technology have helped the City in its efforts to implement a holistic approach to sewer rehab. “The ability to clean the lateral from the main – potentially eliminating the need to install a cleanout – can save a lot of money. Every dollar you spend on installing a cleanout is one less dollar going toward infiltration remediation.”

To address QA/QC, Columbus has established a new products committee that evaluates and pre-approves products to be included in the specifications. “We want to make sure that the bidders are qualified and the materials have been tested on projects with good success,” Domenick said.

In New York, the use of CIPP is also on the upswing. “We have doubled our commitment to CIPP,” Wynne said. “In doing a life-cycle analysis, we realized that there is no way to keep on top of 7,000 miles of sewer with open-cut. The ability to reline the pipes has helped us bridge that gap.”

The physical challenges of working in the densely populated urban environment has helped spur the use of trenchless pipe rehab. “We were falling behind in our open-cut program and found that in some cases it was quicker to do a point repair and reline the pipe. That freed up manpower that can be used to line even more pipe.”

Given that New York is the largest metropolitan area in the United States, it is a bit surprising that contractor availability is a limiting factor for DEP in its trenchless program. “We have struggled with a limited contractor pool,” Wynne said. “Some of the reasons for the limited pool are the stipulations and upfront costs that go with working in New York, such as working at night and dealing with traffic issues that you don’t have in smaller towns and suburbs.” Additionally, New York’s labor rules can be a challenge for out-of-state contractors unfamiliar their nuances.

Wynne says DEP is continuing to look at ways it can expand its trenchless portfolio. “By nature, trenchless technology is a good tool for us given the urban environment, but even trenchless can be complicated because of existing utilities that you have to work around and the number of services in each mainline run. There is a lot of potential for trenchless and we are exploring new technologies that may be beneficial to us.”

In the Town of Hull, a coastal town of 10,000 near Boston, Struzziery is overseeing a rehab of a 36-in. interceptor in need of repair. The Town used a combination of CIPP and dig-and-replace, as well as grouting, in rehabbing one-third of the interceptor previously, but is looking at CIPP primarily to rehab the remaining two-thirds of the 17,000-ft run of pipe.

“One of the biggest advancements in recent years is the ability to install large-diameter liners,” Struzziery said. “Years ago, 36- or 48-in. liners were a stretch, particularly with UV cured liners, now that is an everyday occurrence.”

Following the completion of the interceptor, Struzziery envisions an expansion of trenchless work to address I/I in the Town’s older sewers. “We intend to use trenchless rehab – including slip lining and pipe bursting when appropriate – to address our most problematic areas, but CIPP has the advantage in that there are fewer excavations needed to make connections.”

The UV-CIPP relining Process uses a UV light train, shown here on a Ted Berry Co. jobsite, to cure the pipe as opposed to steam or water. Part of the light train is a camera, which gives the contractor the ability to view the new line before and after the cure.

In addition to mainline lining, lateral lining has been a growing area with the trenchless realm. As previously stated, the City of Columbus is ramping up its lateral lining program in its effort to reduce I/I.

“We see the market for lateral lining continuing to expand as cities are including laterals as part of their lining programs,” Trapani said. “For many years, cities were addressing mainlines but ignoring the laterals, partly because the technology was lacking. However, the technology has caught up in the last 10 years.”

Improved materials have led to CIPP liners that are able to negotiate bends and offsets, and improved cleaning and TV equipment has led to a reduction in the number of cleanouts that need to be installed. “In the past when a client had a program to line laterals, we could probably line only 50 percent because of bends or issues in the pipe that made lining impossible,” Trapani said. “Today, we can line 90 to 95 percent, sometimes 100, as a result of improved technology.”

Many of the experts agree that the use of CIPP to rehab pressure pipes is a growing area.

“Some of the most rapidly growing segments are for pressure pipe applications,” Schiro said. “We have seen multiple large force main projects completed in recent years. I think we will see this market continue to evolve and have a larger footprint in other areas, such as potable water applications.”

Like many areas within the construction arena, the relining sector faces challenges in the number of available skilled labor to complete projects.

“As with many industries, I think the biggest challenge facing the trenchless industry is finding and keeping a skilled workforce,” Schiro added. “It can be difficult to find skilled employees that are willing to spend a considerable time on the road away from family and friends for an extended period. We are also seeing many seasoned individuals enter into retirement. This group includes some real pioneers in our industry that were involved in the development or standards associated with many of these technologies. The good news is we see many dedicated and talented individuals, often mentored by the individuals entering retirement, willing to take on these roles.”

RELATED: Seeing the Light: SAERTEX multiCom Continues to Grow along with the UV CIPP Market

Struzziery concurs. “Whether it is finding truck drivers or CIPP installers, we just are not seeing an influx of young men and women entering into the market. That is something that may be a big problem in the not-too-distant future.”