While his friends were pining after the latest and greatest in American muscle like an Olds Cutlass 442, Shaun McKaigue had sports cars on the mind.  He bucked the trend, his first car was a Volkswagen Karmann Ghia, and that passion for sports cars – namely rear-engine German ones – never went away.

When he’s not busy in his job as president and CEO of Toronto-based Fer-Pal Infrastructure or working on his “honey do” list at home, McKaigue can be found on some of the most storied road courses in North America, battling it out door-to-door in IMSA’s Ultra 94 Porsche GT3 Cup Challenge Canada by Yokohama race series. IMSA, the International Motor Sport Association, is a premier sports car competition sanctioning body in North America and McKaigue pilots the No. 34 Fiorano Racing Porsche in the series’ Gold Cup.

When did the sports car bug bite and why did McKaigue gravitate to Porsche? Racing does not run in his family, but McKaigue does recollect two defining moments.

“When I was a child he [my dad] had a 1959 Jaguar. Maybe that’s how the sports car gene was embedded,” he says. “Like most grownups, you want to buy the car you fell in love with. In my case, I was maybe 11, and we were on a family camping trip. A car went by and it had this great big wide rear end, it was a Porsche 911 Turbo with a great big wing on it and I thought, ‘Wow is that car ever cool,’ and that was my first indoctrination into the Porsche.” 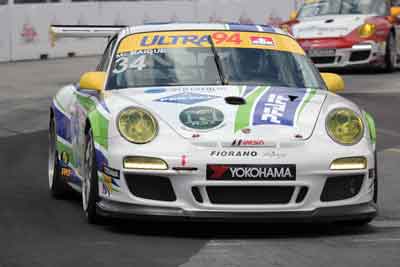 On the Right Track

After years of hard work and saving, McKaigue was able to purchase a Porsche 996 and shortly thereafter, he jumped into Porsche Club of America (PCA) track days and came up through the system.

The 996, Porsche nomenclature for the 1999-2004 model year Porsche 911s, allowed McKaigue access to the Upper Canada Region PCA track days at the fabled Canadian Tire Motorsport Park – formerly known as Mosport – in Bowmanville, Ontario. He started small, attending the track days, which offer owners time on the track with an instructor. That progressed to high performance driver’s education at the track days where you learn to take your car to its limits, then to instructor level and then to PCA club racing. “It’s an insidious, slippery slope,” says McKaigue, whose first race was with PCA in 2009.

His involvement with IMSA began in 2011, the inaugural season for its GT3 Cup series and one in which McKaigue took top honors in the Gold Cup. This is a spec race series meaning the Porsche 911 GT3 Cup cars are identical purpose-built racers direct from Zuffenhausen, Germany.  The series is divided into the Platinum and Gold cups. Platinum is for the more powerful 2014 and newer body styled 911s and Gold is for the 2013 and older 911s.

Considered a semi-pro series, the GT3 Cup Challenge is often a support race for a main feature race like the IndyCar Series or Formula 1 (F1). Many of the drivers in the series have graduated to the top tier professional series.

“For guys like me, it is a great series to run in, which has a fairly high level of racing,” McKaigue says. Unlike the hot young drivers looking to get to the next level, McKaigue has no illusions of taking the next step, joking that his career will only go as far as his VISA card lets him. “One of the most enjoyable things is that it provides an outlet, relief from the daily grind. You have to concentrate completely and be completely in the moment. It becomes a great stress reliever.” In addition to familial support, backing McKaigue is the No. 34 Fiorano Racing team that includes a chief engineer to setup the car, a data analyst, a tire man and the transport driver – all play an integral role in the car’s success or failure on the track. And 2016 was a successful season for McKaigue, who finished first in the Gold Cup after 12 rounds of racing.

“The teamwork on these cars is amazing. One thing that is remarkable about this sport is that it is a team sport, but to the outside world it seems as if it is all about the driver,” McKaigue says. “Unfortunately, the drivers get more attention and more credit than they probably deserve because teamwork here is absolutely equal to any other sport. A driver without a car does not go very far.”

“I am a very lucky person. I get to be the president and CEO of Fer-Pal Infrastructure, a company on the cutting edge and leading edge of technology for water main rehabilitation,” the racing CEO says. “In our business life we are constantly innovating and constantly looking for new way to tweak our product and to always do better and never be afraid to try something new.”

Much the same is his racing, especially with the Porsche, a manufacturer known the world over for its technological advancements. As a racer, McKaigue is hardwired to never give up and that nothing is over until the car passes the checkered flag.

“We’ll take our failures, we take our lumps, but we are always looking for something better. Giving up is never an option,” McKaigue says of his life on and off the track.

Also embodying the spirit of never giving up and providing a rooting section at home track races are the children from Hearth Place Cancer Support Centre of Oshawa, Ontario. For the last three years McKaigue’s cars have carried a sticker for the organization. In addition to fundraising for Hearth Place, he invites children from the organization to the track for the day.

“I have to say that it is one of the most humbling experiences of my life. They are the most courageous children,” he says. “Whatever situation I may be dealing with certainly pales in comparison to what they deal with. The courage that I see that those children have is one of the most wonderful experiences I have taken out of racing.”