Keeping it in the Family: Thompson Pump & Mfg. Goes All in on Manufacturing Pumps

Thompson Pump & Mfg. is approaching its 50th year in business — a golden milestone for any company — and its leaders are already focused on forging its path for the next 50 years and beyond. Company leaders foresee a bright future for the pump manufacturer as they set their sights on becoming one of the top makers of pumps in the business.

“We are already on the clock for the next 50. Our goal is to hit 100 years,” says company president Bill Thompson, who, along with his father and younger brother, started Thompson Pump in 1970. “Our goal is to be recognized as one of the premier pump manufacturing companies in the world, not just in the United States.”

Definitely a bold and decisive goal. Thompson believes such a position is attainable through its network of distributors here and around the globe. The company’s strong reputation internationally is also an asset the company plans to tap into.

With such a projection, it’s easy to forget the modest means by which Thompson Pump began. The company opened its doors as a dewatering contractor but quickly turned its attention to making the pumps they were using; selling them, and later renting them, to other contractors soon followed.

The family business steadily grew over the years to a point in which it is now among the leaders of the pump industry. In 2018, the company generated more than $106 million in revenue and employed 388 employees over 20 locations, primarily in the Southeast (with a few as far north as Providence, Rhode Island, and as far west as Kansas City, Kansas). Its distribution network includes 16 U.S. dealers and 12 international ones.

Thompson Pump is the largest manufacturing employer in Port Orange, Florida, a suburb of Daytona Beach with a population of 60,000. While the company has remained loyal to its original location, Thompson says the company recently purchased 15 ½ acres of land in another section of the city. No decision has been made but the family is contemplating building a new, state-of-the-art manufacturing facility on the new property.

A major player in the pump rental market, Thompson Pump started off 2019 with some big and unexpected news: It sold its successful rental division to United Rentals Fluids Solutions Group, for an undisclosed sum. The move was made so that the company could concentrate its efforts solely on manufacturing and selling pumps, officials say. The impact of the decision and how the company moves forward is the focus of company leaders today.

The company’s future will be in the hands of the third generation of Thompsons, likely sometime in 2020. Chris Thompson, oldest son of Bill and Carol Thompson, has run the daily operations since 2015, along with his younger brother Bobby, who is a region manager.

But before looking to the future, we take a look to how the company got started.

The Thompson family started the company in 1970, not as a manufacturing business, but as a contractor. Family patriarch George A. Thompson enlisted his two sons, Bill and George M., to join him in his endeavor of creating a successful dewatering contracting business. George A. had been working as an operating engineer in NASA’s famed Apollo program but as that program was winding down, he looked to his and his family’s future. Bill had just finished college and his younger son George M., high school. At that time, the construction market in the southeast United States was booming.

“The need for infrastructure was everywhere,” Thompson remembers. “There was a lot of demand for dewatering products and there were very few companies doing that sort of thing. As we moved forward, we saw that a lot of the products available for construction dewatering were not up to par and needed improvement. That’s where my father took the idea of a rotary pump that was used in industrial applications and modified it for pumping groundwater, which typically has some sand, grit and sometimes sulfur and iron in the water, and we began building our own pumps.”

And with that innovation, the trajectory of the company shifted. Thompson Pump turned its efforts to developing its own line of pumps and began representing two Italian pump companies in the United States. This was about 1974. From this point forward, Thompson Pump was now a manufacturer of pumps. Period.

The operations remained conservative and small during the early years; additions and changes were incremental. Pumps were manufactured in a shop approximately 2,500 sq ft in size — compared to the 75,000-sq ft, nine building manufacturing campus Thompson operates from in 2019.

“We started out pretty small. We weren’t a public company with investors. Everything was financed by our family,” Thompson shares. “We were fiscally conservative in how we grew and operated. For quite a while, we were unable as a family to take paychecks. As we hired people, we made sure [our employees] were paid. I worked two jobs initially — teaching at a high school for four years.”

Today, Thompson Pumps manufactures a slew of centrifugal pumps — Wet and Dry Prime pumps — for its customers. Pumps in the Thompson catalog are mostly designed for multi-purpose use, are diesel engine driven and portable; the pump line also includes models that are electric motor driven, as well as by natural gas and propane.

Thompson Pumps got involved in the sewer bypass market early on, as customers looked for products for that application. The company modified some of its existing pump models so they could be applicable for bypass use, as well as being able to handle large solids and stringy materials.

The demand for pumps for sewer bypass work is, in part, responsible for the development of Thompson Pump’s successful rental side of business during the mid-1970s. An increasing number of customers weren’t interested in purchasing the pumps; they just wanted them for short periods of time.

“It was the concept of use vs. ownership,” Thompson says. “The idea of renting was not really prevalent for pumps at that time. We started to build up our rental fleet, which enhanced our manufacturing capabilities as we would have to build enough pumps so we could have [them] available for rental.” 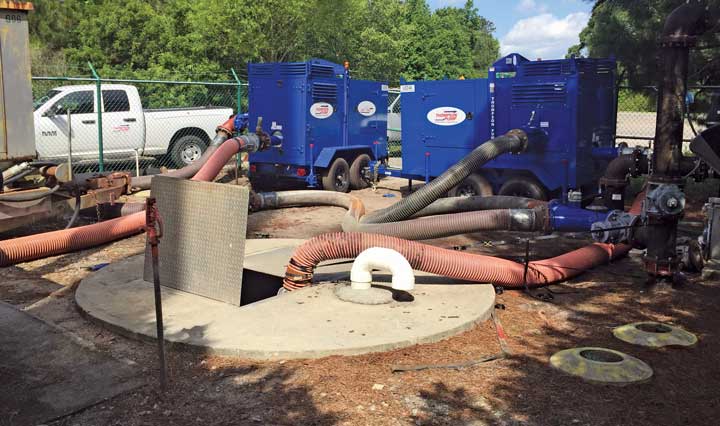 In February 2019, the company announced that it had sold its rental assets and related operations to the United Rentals Fluid Solutions Group.

The growth of Thompson Pump’s rental division coincided with the boom of the construction and sewer bypass markets — and quickly became the more dominant side of the company vs. sales. The rental division soon represented about two-thirds of Thompson Pump’s overall business and as Thompson notes, “We became really good at it.” He explains that the company developed and cultivated a reputation over the years for being a company that has a great deal of knowledge, experience and innovativeness in order to enable its customers to finish their projects on time, profitably and successfully.

“I believe that reputation stands with us today as a manufacturer,” Thompson firmly states.

In February 2019, the company announced that it had sold its rental assets and related operations to the United Rentals Fluid Solutions Group. Thompson explains that the move allows the company to re-focus its efforts and resources solely on manufacturing, noting the time was just right.

“We looked at the overall situation and decided it was a good time for us to divest of our rental operations so we could focus on manufacturing. Rental was like the tail wagging the dog for many, many years and it detracted from our ability to devote the time and resources to product development and increasing the efficiencies and expanding our manufacturing capability,” Thompson says. “Now that we’ve divested [the rental division] to a very good company in United Rentals Fluids Solutions Group, we are able to focus our resources on manufacturing. We believe in the long run, for us as a company, that this is the right thing to do.”

He acknowledges that the rental division is one of the aspects that had set the company apart from its competitors, allowing them to deal directly with end-users, as well as giving Thompson Pump a unique perspective into what the customers needed, what problems they had, which enabled them to develop a solution. “We became known as a company that had great knowledge, great expertise, willingness to work very closely with our customers and provide them value far beyond just a piece of an equipment,” Thompson says. “That is one of the challenges we have going forward as a standalone manufacturing company. We have to make sure that we do not lose those characteristics that have made us the company we are today.”

He adds, “We want to support our distributors and partners and make sure we can devote our assets to assisting them and making them more successful.” Thompson talks of the highly competitive nature of the pump market, noting that consumers have many options when it comes to buying a new piece of equipment. He welcomes the strong, competitive nature of the market, saying such an atmosphere forces companies to remain creative, innovative and just do a better job at serving their customers — in the United States and beyond our borders.

Thompson Pumps does business in 44 countries internationally, including Canada, Mexico, China, Russia, Indonesia and with many countries in Latin America, Europe, the Middle East and Africa. Today’s global marketplace is both a challenge and an opportunity, Thompson says. “We buy products from other countries and we sell into those same countries. We’re pleased with what we are seeing with the recent changes to trade agreements that the current administration is promoting. For years, we thought a lot of them were one-sided and now we’re seeing that we’re getting to a much leveler playing field. I think that is good for everyone.”

Thompson Pumps got involved in the sewer bypass market early on, as customers looked for products for that application. The company modified some of its existing pump models so they could be applicable for bypass use, as well as being able to handle large solids and stringy materials.

Reflecting the last 50 years, Thompson attributes the company’s success to its people and the long tenure of many employees. The company has a wall of photos prominently displayed in its logistics center, honoring employees who have worked there at least 25 years. “We probably have over 40 people memorialized there,” he says. “I think that has been one our greatest attributes: Our ability to hire, retain and develop quality people.”

As the company gears up to mark its golden anniversary, Thompson shares that he’s ready to take a step back and fully turn over the family business to the next generation. “My plan is for a year from now to move back into the chairman’s position and not be so active in the company,” he says. “We have an excellent succession plan in place.”

And Thompson Pump is truly a family business. Beyond his sons Chris and Bobby, one of his nephews works at the company — Dale Conway, vice president of engineering, as well as Bill’s sister Kathleen Conway in accounting. His wife’s cousin, Shawn Mackey, is vice president of finance and the longest family-tenured employee.

His father and his brother, who passed away in 2000 and 1979, respectively, missed being a part of the rapid growth of the company but the founder’s work ethic and spirit remains a cornerstone of his company today. “That is what has enabled us to continue on year after year. Our determination,” Thompson says. “We’re never satisfied. We’re doing a great job but we can always do better. That’s the mentality that permeates through our company.”