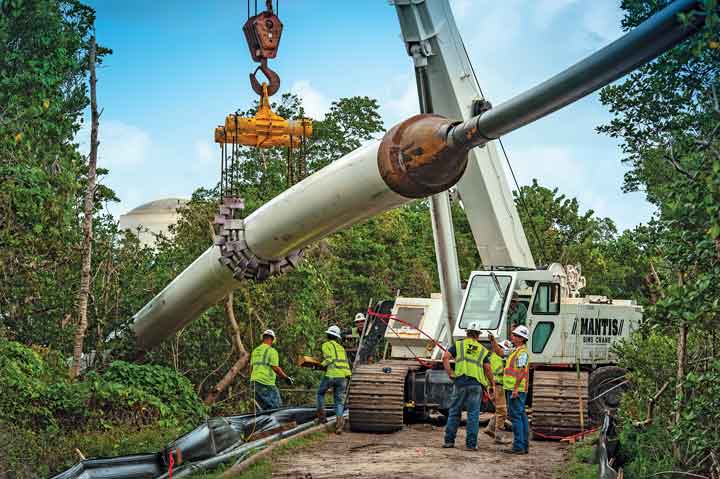 Published by Sharon Bueno October 17, 2016 View Profile
The 2016 Trenchless Technology Project of the Year for New Installation is an intricate and complex horizontal directional drilling (HDD) project that involves the installation of two parallel 32-in., 7,020-ft bores 60 ft below river bottom in an environmentally sensitive area in order to ultimately install underground electric lines.

The project — known as the Indian River HDD Crossing — was part of a much larger endeavor to secure electrical infrastructure for some 4.8 million customers, ensuring reliable service in the face of severe weather. Installing electric lines underground is an application that more utilities and municipalities are turning to in order to keep service in tact during times of severe weather and other causes of outages.

This project was accomplished through the ingenuity of the contractor and engineer through their thorough planning, engineering and implementation, as well pushing the envelope in utilizing Fusible PVC pipe (FPVCP) and HDPE pipe.

The HDD work — which used the intersect method to construct the pilot hole — was part of a 13.65-mile long installation project by a large Southeast utility to upgrade its 230 kV underground transmission lines. A critical stretch of this alignment was the HDD section, which crossed a significantly-sized river. Mears Group was the contractor that successfully took on this impressive project, which simultaneously crossed and undergrounded the two circuits, utilizing two separate bores and two separate casings to house the required conduits for the high voltage power cables. Each FPVCP casing ultimately housed four 10-in. and two 3-in. HDPE conduits in a specially formulated thermal grout.

“The project was called a Reliability Project,” says Mears Group project director and HDD industry veteran Ron Halderman. “The new lines give a secure way to move electricity between the plant and the mainline grid in case there were issues, such as weather, to ensure there is a reliable source of electricity. That’s what this project is for.”

“We reached a new threshold for the electrical industry, pushing the envelope to a point that had never been achieved before. This was very challenging because we were in new technical territory, making this kind of project work. We also had to factor in the substantial logistical problems on the exit side of the crossing, having to pull the Fusible PVC casings and then later the HDPE bundled conduits, along a busy highway, across the water, then over mangroves to reach the exit points the HDD bores.”

“The use of a non-metallic casing at lengths greater than a couple thousand feet provides the electric power transmission industry another key tool for projects,” says Underground Solutions vice president of engineering and technology Tom Marti. “In crowded urban areas there is not enough land or rights of way for overhead lines. Underground bury of the lines that inherently includes challenging HDD sections can be done, as demonstrated by this project.”

The project required complex HDD equipment site setups to accommodate the two large rigs — a 1.3 million-lb Prime Drilling rig on the entry side and a 140,000-lb American Augers rig on the exit side — and support equipment, which included two American Augers 1000  Cleaning Series Mud Systems, as well as two sets of 7,020 ft of 32-in. Fusible PVC and 10-in. HDPE pipe (supplied by ISCO Industries). The FPVCP casing pipe (each casing weighed 385 tons) was fabricated and assembled northeast of the drill exit site along a busy highway. Each casing assembly navigated a 100-degree horizontal curve, floated across a creek and navigated trough an aerial insertion to the insertion pit.

Once the HDD installations of the casings were completed, a unique thermal grout was used to fill each FPVC casing. Then open-ended cable conduit bundles were pulled through the grout for the entire length of each casing in order to lessen the pull loads due to buoyancy issues, and finally to accept the high voltage cables. The casings were installed over the winter of 2015/2016 and the conduits were installed in spring 2016. The pilot bores were drilled using the intersect method with aid of Gyroscopic steering systems, provided by SlimDril International. “We used the Gyros on both rigs, drilling from both sides to intersect, which is one of the very few projects that’s ever been done like this,” Halderman says. “We did the intersect roughly from 3,000 to 4,000 ft from each rig, downhole 60 ft deep. We had to drill a near perfect hole because we were going to pull in a length of pipe that had never been done, with the 32-in. Fusible PVC.”

There was minimal operational space on the exit side, due to the environmentally sensitive and protected mangroves in the area. Moving the equipment for the second, parallel bore just 50 ft away, was logistically infeasible.

“There was no room to move the exit side rig. The rig had to sit where it was and we turned it on an angle of about 10 degrees, and then drilled out along the horizontal curve until it got 50 ft away from the first bore. Then we drilled straight across the river,” Halderman says.

As for the prefabrication of the FPVCP casing, that proved to be a challenge, as well. The casing was sub-assembled in three lengths approximately 1 mile from the HDD entry point. To get to the top of the entry point, the casing was manipulated through a tight radius, 100-degree turn from a north-south alignment [along the highway] to an east-west alignment to cross the intercoastal waterway. Two intermediate fusions, using a McElroy 1648 Medium Force fusion machine, were done to join the three subsections into a single 7,020-ft length. An aerial transition needed to be made to raise the casing over the mangroves to the entry point. A vertical curve, supported by six hydraulic cranes with cradles, was used to position the casing for entry for the HDD install. A ballast line was installed and the pull head changed out.

“Getting the casing to the entry point took much longer than the actual HDD pull-in,” Marti says, noting, the complexity of moving a 385-ton, 7020-ft long assembly a mile around a 100 degree corner to the drill exit point.
To assure that the bend radius was held, Mears installed piling every 50 ft along a 2,160-ft transition and then anchored a 42-in. culvert to the piling, resulting in a continuous support throughout the turn.

“While Mears and UGSI have performed numerous long difficult HDD installations of Fusible PVC, for this project some unique testing was done in advance of site mobilization. To prove and set an upper limit of pull force, a full scale test of the pull head configuration, the 32-in. casing pipe, and the fusion joint was performed. A section of the 32-in. DR 21 casing with a fusion joint-centered was pulled in tension at Stress Engineering in Houston, to failure in a cyclic manner to simulate a difficult HDD pull-in.  This was done in a 1 million-lb pull frame. The assembly’s upper limit was reached at 840,000 lbs, over twice the recommended maximum allowable pull force for this size Fusible PVC.

“This test gave the project team confidence that any unknown situations within the pull-in that could be remedied by a higher pull force, could be handled,” Marti says. The project required complex HDD equipment site setups to accommodate the two large rigs — a 1.3 million-lb Prime Drilling rig on the entry side and a 140,000-lb American Augers rig on the exit side.

Halderman also points out the critical component the grout for this project played. The Mears team spent a great deal of time testing and formulating a specific grout to keep the material from solidifying in the pipe before the 7,020-ft pullback of FPVCP casing and HDPE conduit was complete.  “The conventional method that has been used is fairly standard cement type grout. Once it’s actually pumped into the casing and wrapped around the conduits that are inside, in a short amount of time, it sets as concrete and it’s immobile,” he says.

Halderman didn’t want the grout to set up too fast in case there were issues with the pullback so he and his team set out to create a thixotropic thermal grout that would occupy the annular space between the casing and conduits. Mears experimented with several batches prior to the project start until it got one to the appropriate consistency, weight and thermal properties.

“The thermal grout we created would set up like quicksand but if you energized it, such as pulling through it, it would immediately break down into fluid again,” Halderman says. “The grout had a density of 13 lbs per gallon, considerably heavier than water, and approximately 230,000 gallons of grout was pumped into the inside of the 32-in. casing. Once the casing was filled with grout, the open-ended cable conduits were then pulled back through the grout from exit to entry. Pigs were finally used to push the grout out of the HDPE conduits so that the electrical conduits could be pulled in. Because the grout relied solely on thixotropic properties to achieve its heat dissipation properties instead of cement, this conduit installation phase was no longer a time-dependent critical path.”

Logistics also impacted how crews were able to manage the mud systems, which were set up about a half mile away on the land away from the mangrove swamp — approximately 2,000 ft from the exit points. In order to mitigate downhole pressure and greatly reduce the risk of frac outs, as well significantly help extend HDD drilling lengths, crews used Mears’ patented Mud Recovery System (MRS).  The primary advantage of the MRS, principally due to hydrostatic head reduction, is the creation of a lower elevation preferential vacuum point (low pressure) along the drilled route for returning fluids.

The complex and unique nature of this project required the team to be innovative and creative in its approach and execution. The length of FPVCP, the grouting and the installation of cable conduits through the grout had never been achieved before. Engineering, expertise, and diligence ensured a successful project completion.