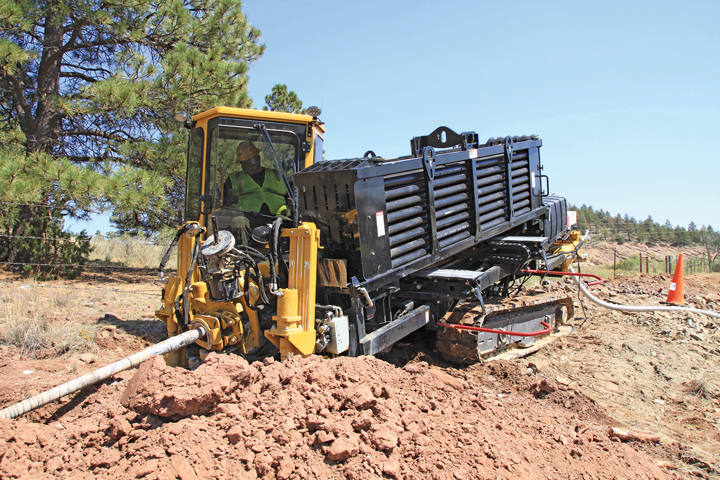 More than 166 windmills, 300 megawatts, 140,000 homes and just one drill; when the numbers are all added up, they total a successful boring project and installation of Canada’s largest wind energy project to date.

In summer 2013, two of North America’s largest wind energy companies — Enbridge and EDF EN Canada — came together to complete a massive alternative energy expansion in Vulcan County, Alberta.  The expansion is known as the Blackspring Ridge Wind Energy Project and is set to provide power to 140,000 homes in rural Alberta.

The original plans called for Mortenson to ship the conduits from their U.S. location in Minneapolis, Minn., but as the work progressed, officials determined this was not economical and proved to be too tedious. It was at that time they turned to The Crossing Company.

“The project manager from Mortenson approached us to see if we were capable of supplying, fusing and installing the pipes and conduits. We took it upon ourselves to start supplying the conduits for them, and it organically grew from there. Originally we were just going to be the provider for the HDD (horizontal directional drilling) services and ended up providing the pipe and adopting the fusion services,” said Ben Armstrong, Light Rig Division (LRD) branch manager, north, for The Crossing Company.

For a company the size and scope of The Crossing Company, finding new ways to provide its services and talents is a welcome challenge.

“We like to think of ourselves as a one-stop-shop for trenchless construction. I think we are very team-centered and technically oriented company,” Armstrong says. “When we acquire other companies, we are proud of the fact that the owners often become key members of our team.”

As the technology and demands of HDD work have progressed, so has the level of expertise within The Crossing Company. Customers are becoming more interested in the level of detail available as the drilling crews work underground. To help supply customers with the desired information, The Crossing Company makes it a point to stay on the cutting edge of drilling technology.

It was the company’s technical savvy and ability in the HDD industry that proved most valuable at the Blackspring Project.

Located just north of Lethbridge, Blackspring Ridge features a lake in a large valley, and the windmill project was set to run along the top of the ridge. Due to the proximity of the windmills to the lake, one of the first challenges that The Crossing Company faced was wet ground conditions.

“We encountered numerous underground springs, and that led to us having trouble getting equipment in and out. Those areas are just like a big sponge, so when you drive a truck in it, everything sinks. One of the first trucks in got stuck and it took a day and a half to get it out. After that, we got a hold of Mortenson and they put down matting,” says Collin Kaye, vice president of LRD Operations, south, for The Crossing Company.
Both companies then went out and inspected the entire project area to determine the problem spots. Mortenson then placed nearly 100 pieces of wood matting down to help keep the crews out of the mud. The matting created a temporary road and alleviated any sinking issues for the remainder of the boring process.
Much of the bore path crossed through clay with the occasional sandstone formation providing an extra degree of difficulty. Nonetheless, The Crossing Company combined its quality employees and equipment to bore the entire distance in only three months.

“We utilized just one machine, a Vermeer D36x50 Navigator horizontal directional drill, for the entire project. We had a good crew on it and we had no breakdowns, so we were able to keep ahead and keep up with everything. The only thing we had to change was the drill bit to help get through the harder sandstone,” Kaye says. “We had one crew fusing and laying out pipe and we had a drill crew coming in behind drilling.”

“It was bit of a challenge keeping everybody organized, with the delays and trying to get everybody on the same page. We did a lot of utility crossings that had to be coordinated with utility representatives when crossing their lines. However, having the right equipment and not having any downtime kept us on track,” Kaye says.

The installation portion of the project was started in June 2013, and The Crossing Company finished boring and installing the electrical conduits by October.

“Just to be part of Canada’s largest wind energy project and to be able to get through it without any mechanical issues, without any problems and being able to go above and beyond for our customer and supplying the fusion and the pipe and all of the other stuff that we don’t normally do — we were just really proud that we were able to step up to the plate and get everything done on time and on budget,” Armstrong says.

Windmills continue to be built across the 19,424.86 hectare (48,000-acre) spread of the Blackspring Ridge and are expected to be fully online by summer 2014.