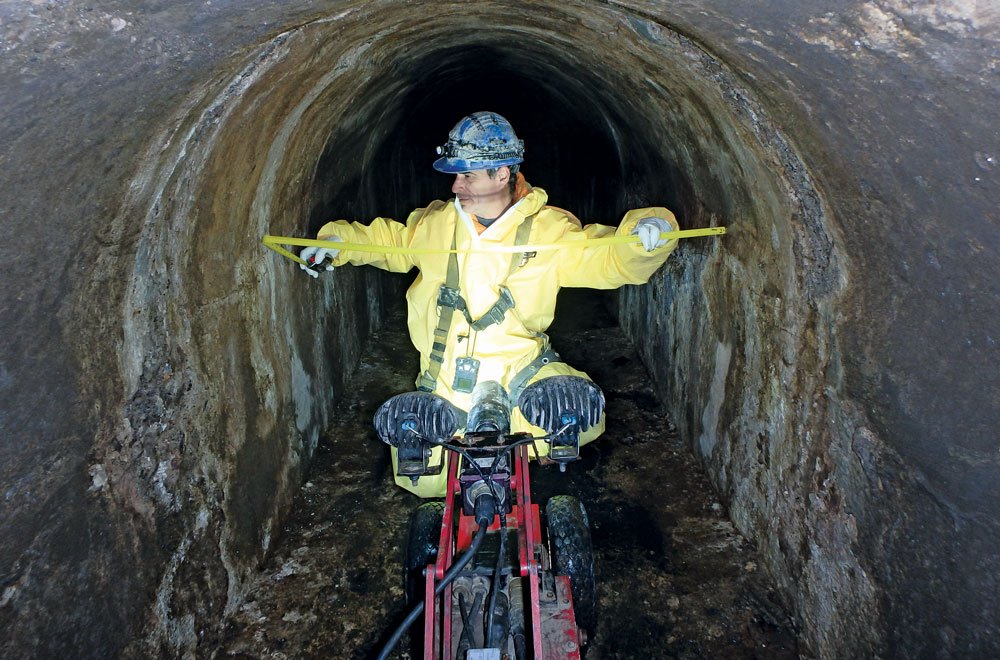 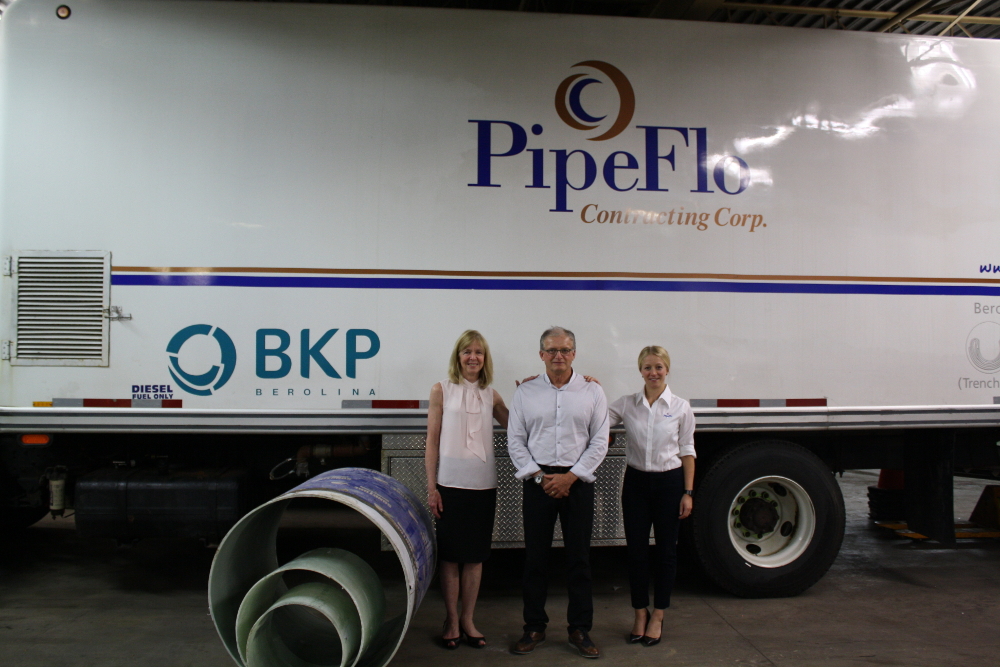 When PipeFlo Contracting Corp. was incorporated in 2003, it marked a return to the Canadian trenchless market for Bruce and Darlene Noble. Today, the company is one of the most respected trenchless contractors in Ontario and often credited for being technological leaders in the field.

This desire to be at the leading edge of the industry is not new to the Nobles, who from 1984 to 1996 owned UniFlo, a company that was built on serving the commercial sector of downtown Toronto and later introduced the U-Liner trenchless product. After selling the company in 1996, Bruce Noble says that he and his wife had other business ventures, but they kept a close eye on the trenchless marketplace.

“I’m a plumber by trade,” Bruce Noble says. “We decided in 2003 that this [the trenchless market] is what we personally knew best to succeed as a successful company and to contribute to the development of the industry. We saw the market changing and a good opportunity to grow the business by being at the forefront of new technology.”

Bruce and Darlene, along with Steve Denison, purchased the assets of The Lining Co. and commenced business as PipeFlo on June 1, 2003. In 2015, Denison retired and the Noble’s daughter Julia was introduced into the company as the operations director and assistant business development director.

Julia, who worked for the company part-time during high school, joined full-time following her graduation from McMaster University. She wasn’t thrust into the family business, rather there was an opening that needed to be filled and she stepped in as operations dispatcher. Much like her father, Julia says she found the industry interesting, fast-paced and with huge potential for growth and she quickly established her reputation at PipeFlo. In 2012, after his leave from the military service, Braydon McNeill a Canadian Army veteran, took on the position as Operations Coordinator. 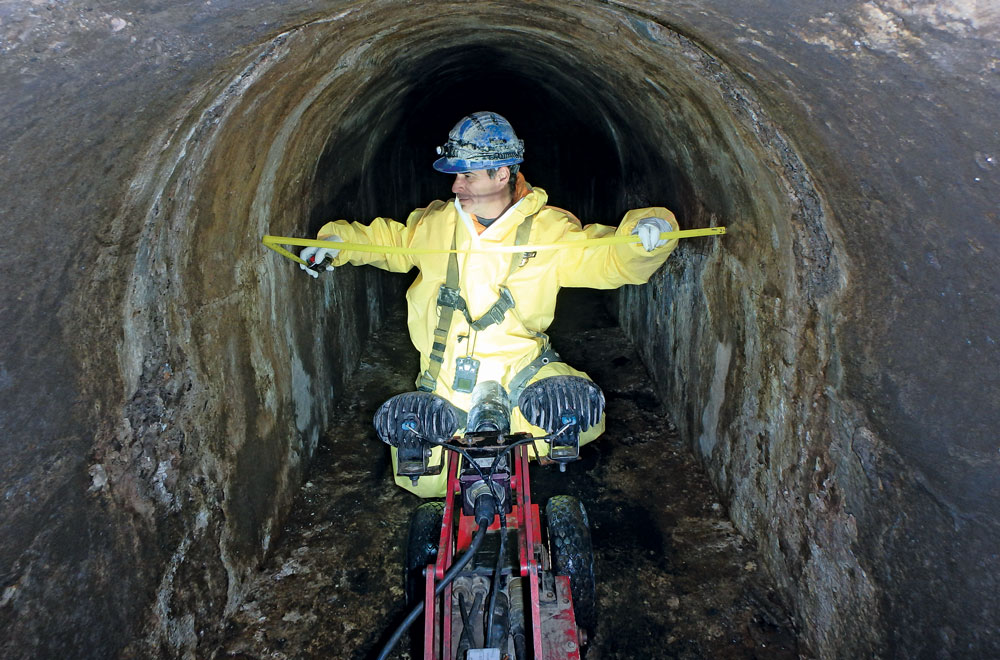 In the last 15 years, the Nobles have grown the company from three field staff – all of whom are still with the company in various capacities – to a company of approximately 60 employees operating a fleet of more than 50 pieces of specialized equipment.

While having a strong background in trenchless from their previous work as UniFlo, the growth of PipeFlo has been intentionally slow and methodical. “You have to earn your stripes so to speak,” Bruce Noble says. “We didn’t want to take on too much work and have to perform it fast. Instead, we built our reputation, and the company, based on the quality of our work.”

This also led the company to diversify to be able to focus on the clients’ needs and also to maintain flexibility so its crews were always working. Ostensibly, the company is divided into four pillars:


“Because we have a group of senior, experienced employees, we have a great knowledge pool,” Julia says. “This allows us to take on these diverse and larger projects.”

The experience is important, as is constant communication at all levels. Mid-afternoon each workday the operations team at PipeFlo meets to discuss the progress of daily work schedules and the forecast for the remainder of the week. By tracking crew production, Julia says the company is able to allocate assets to different projects to ensure that all projects are maintained in good standing. “These meetings offer a touch point where the whole team can work out any questions or concerns regarding ongoing projects,” Julia says.

With its diverse service offerings, PipeFlo is able to keep all of its employees busy year-round by shifting labour to various projects as needed. The accelerated growth of the company was the result of the introduction of UV-cured trenchless products beginning with manhole to manhole relining, which the company brought to Ontario in 2007. 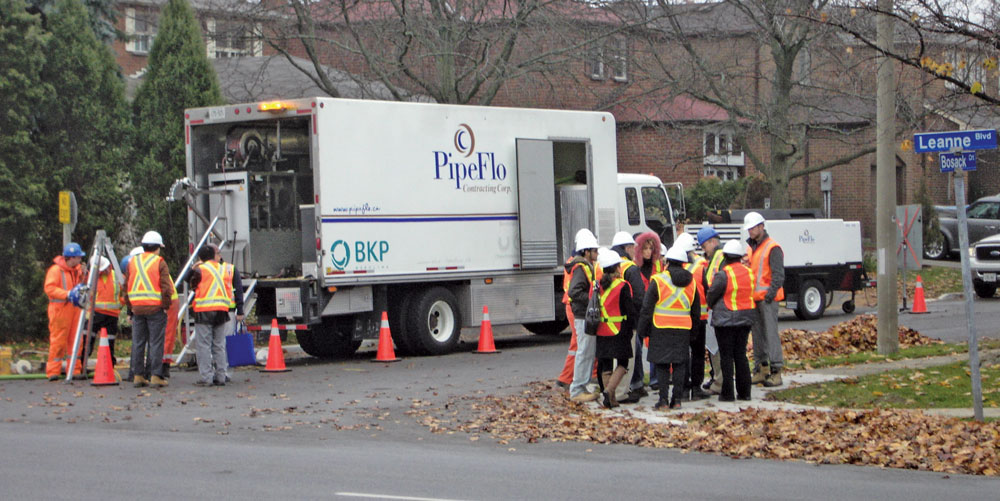 The PipeFlo Contracting Corp. team assembles at a rehabilitation site in Mississauga, Ontario. PipeFlo is credited with being a technological leader in the trenchless sector. It was the first company to bring ultraviolet-cured pipeline rehab to Ontario.

Bruce Noble is known for being at the forefront of the industry, both in his time with UniFlo and today with PipeFlo. One of the keys to being at the forefront has been his keen eye on new technologies in the underground infrastructure world. The PipeFlo team keeps abreast of these technologies by attending IFAT, the world’s leading trade conference for the water and sewer industry. Bruce says he hasn’t missed one since PipeFlo formed.

In 2006 Bruce was at IFAT where he saw the BKP Berolina technology. He recalls being impressed with the technology and when he returned to Canada, he spoke to his partners at PipeFlo and the decision was made to further explore the technology.

“We thought it [the UV-cured process] was a more environmentally friendly product with less chances for failures,” Bruce says. “When we added it all up, we called them back and set up an opportunity to view an installation in Düsseldorf, Germany.”

He returned to Europe and visited the BKP project site and an agreement was made to bring the first BKP UV-cured rehab system to Canada. PipeFlo has been a loyal BKP customer since its inception. So impressed was the company by the UV-cured technology that PipeFlo later added the UV spot repair technology to its roster, and it became an installer for the UV Cosmic TopHat connections as well. These new UV-technologies came with its own set of challenges.

“We were the first to adopt and bring UV-cured lining into the Canadian market in 2007, so it was challenging to educate municipalities on the differences and benefits to this method over conventional felt lining,” Bruce recalls. “PipeFlo is now proud to see its contribution [to the industry] in the change of many municipal contract specifications to include UV or solely spec UV due to its environmental benefits and successful track record in Southern Ontario with the foundation established by PipeFlo installations.”

Many of the early days of PipeFlo were spent educating owners on the benefits of UV-cured GRP lining because in the early 2000s there were not many companies pushing the technology in North America. Today, Bruce says, the province is witnessing, “a significant interest in UV GRP lining.”

Julia Noble adds that PipeFlo has gained the trust and respect from the asset owners and the engineering community in Ontario by the number of inquiries the company receives for educational opportunities. “Municipalities and engineers are calling us to educate them on the benefits of UV-cured rehabilitation,” Julia says. “This is a testament to the quality of our work and Bruce pushing the education of UV-GRP lining in Ontario.”

These trenchless outreach opportunities – both via PowerPoint presentation and hands-on at project sites – are eye-opening experiences for facility maintenance, operations and engineering staffs, Julia says. She adds that PipeFlo is able to highlight the benefits of trenchless and that nine out of 10 times there is a trenchless option available to complete a project.

“To me it [trenchless] makes sense when you look at the benefits,” Bruce says. “And after 36 years in the business, the younger generation is now embracing trenchless technologies.”

Through these continued educational opportunities, PipeFlo has assisted in the growth of the trenchless industry in Ontario. There have been many changes in the province’s trenchless market most notable to Bruce are the size of trenchless contracts in the larger cities and the number of owners switching pipe repair programs from traditional open-cut to no-dig/low-dig options.

One bit of advice Bruce received when opening his first business in 1984, was to always be ahead of the curve in technology and he has lived with that commitment. Bruce has never missed an IFAT show and in 2018 he and Julia were both in attendance. He joked that since now more people are requesting, as well as installing, UV-cured products it’s time for PipeFlo to find the next new technology.

“We were in Munich this past May and viewed a number of new pipeline repair methods that we identified that will bring a new look and upgrade some of our existing technologies,” Bruce says. “We are doing our due diligence because some products are not a good fit for the Ontario marketplace.”

Another way that PipeFlo contributes to and learns from the trenchless industry is from its active involvement in the Centre for Advancement of Trenchless Technologies (CATT), NASSCO and the North American Society for Trenchless Technology (NASTT). PipeFlo is one of the earliest members of CATT and Julia is in her second year on the board of NASTT’s Great Lakes, St. Lawrence & Atlantic (GLSLA) chapter.

“All of these organizations are key to staying in touch with the marketplace. The ability to network with manufacturers, clients and competitors is the main engine that is driving the industry forward,” Bruce says. “The single largest upside to being part of these associations is developing a standard for quality and safety for the day-to-day operations of all parties involved.”

With a keen eye for the latest trenchless innovations, a focus on completing projects safely and to a high-quality standard, Bruce says that PipeFlo Contracting is poised for growth.