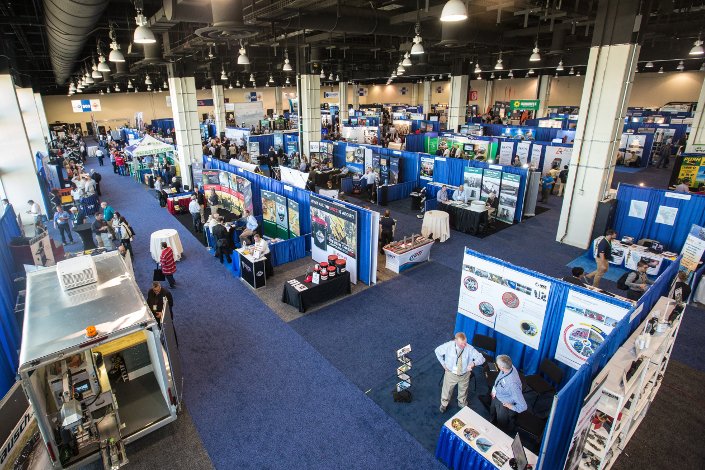 Owning the services of Mortimer the Sewer Rat for the next year are Akkerman, Michael Byrne and Iowa Trenchless. A group of Trenchless Technology Person of the YEar recipients. The trenchless community converged in the nation’s capital April 9-13 for NASTT’s 2017 No-Dig Show, attracting a record number of exhibitors and nearly 2,300 attendees for five days of trenchless networking, technical papers and innovative products.

The 2017 event marks a return Washington, D.C., and the Gaylord National Resort and Convention Center for No-Dig; the show last made a stop here in 2011. The number of exhibiting companies reached 195 — the most ever for a No-Dig Show. The conference is always a global trenchless event and this year that was hammered home as the show co-located with ISTT’s 35th Annual International No-Dig.

The No-Dig Show brings together the industry’s past, present and future, honoring the indelible work that trenchless professionals have created. The 2017 Trenchless Technology Person of the Year was formally presented to Vermeer Corp.’s Jim Rankin — an industry professional who has helped shape and expand the horizontal directional drilling industry over the last 40 years — and all of the winners of the 2016 Trenchless Technology Projects of the Year were recognized.


The No-Dig Show has two main attractions that are huge draws. One is its highly-acclaimed Technical Program, with more than 160 peer-reviewed papers through six tracks presented in 2016. The papers represented a broad range of industry topics, covering the gamut of trenchless methods and issues. The sessions this year included Roundtables that featured different trenchless topics (Manhole Rehab, Microtunneling, HDD, Water Main Rehab, Stormwater/Condition Assessment and Alternative Project Delivery), as well a dedicated Gas Industry Track. The other is the exhibit hall, in which attendees can see first-hand the latest products that are keeping the trenchless industry moving forward in its quest to address the utility construction and repair industry.

In 2018, the 27th annual No-Dig Show will be held at the Palm Springs Convention Center March 25-29 in Palm Springs, California. Deadline to submit an abstract for the technical program is June 30, 2017. One of the featured events at the No-Dig Gala Dinner,  was the induction of NASTT’s sixth Hall of Fame class.

In 2010, the NASTT Board of Directors voted to create a Hall of Fame in order to ensure that the Society’s most outstanding and praiseworthy members received due recognition. The intent of the NASTT Hall of Fame is to preserve the outstanding accomplishments of exceptional individuals and to honor their contributions to the advancement of both the trenchless industry and the Society.


Joseph L. Abbott Jr. had a distinguished career in the sewer rehabilitation industry. Joining Godwin Pumps in 1989 as national sales manager. In the ensuing 20 years, Joe helped build Godwin’s distribution network throughout the United States and Canada. He played an instrumental role in the development of Godwin’s marketing and sales efforts, including his activities in numerous professional organizations. Recognized as one of NASTT’s seven charter members, he also served on the Board of Directors from 2003 to 2010.

Dr. Tom Iseley, earned his civil engineering degree at the University of Alabama in Birmingham (UAB). Tom’s education was interrupted due to required military service during the Vietnam War.  After serving four years in the U.S. Coast Guard and he returned to UAB to complete the BSCE program and MBA program. He and his father formed a utility construction firm and Tom later transitioned to an academic position at Mississippi State University (MSU). After four years as an assistant professor, he moved to Purdue University where he obtained a Ph.D. in civil engineering and begin to focus on trenchless technology. In 1988, he accepted a faculty position at Louisiana Tech University with a vision to establish an industry/academic/government cooperative research center – the Trenchless Technology Center (TTC). After serving as director of TTC, he served in other academic and industry positions including as a senior advisor to the commissioner of the Department of Watershed Management for the City of Atlanta. In July 2014, he returned to TTC to serve as the director. .

Rod Sutliff was responsible for nearly a dozen game -changing innovations in the CCTV pipeline inspection industry. He came out of retirement in 1984 to form R.S. Technical Services and began to revolutionize the CCTV industry. His string of innovations including the first mainline color camera featuring internal lights, the first true pan-and-tilt camera with tracking lights, a cable reel with electrical gear selection, and many others. Rod also developed a steerable storm drain tractor and an explosion-proof camera. Super Heroes and Villains in the House as Educational Auction Tops $1 Million Mark!

The 2017 NASTT Educational Auction attracted an array of super heroes and villains—all coming together to raise money for a great cause. The 16th annual Educational Fund Auction and Reception, held April 10, brought the 16-year total to more than $1 million. Great villains like The Riddler and The Joker were in the auction house, as well as super heroes such as He-Man, Wonder Woman, and Superman. Special sewer and water heroes also made appearances such as Super Mario (he is a plumber, you know!) and Captain Hydrant.

The Auction is a popular networking event for attendees after a full and busy day of technical sessions and walking the exhibit hall. This year’s event raised approximately $110,000, according to NASTT officials. The raised funds go toward financial support for NASTT’s 11 student chapters; since 2002, the auction was more than $1 million for those efforts.

Butch Graham with Ritchie Bros. Auctioneers served as the official auctioneers for the popular No-Dig event; a silent auction was also held. During the auctions, a wide range of items were donated and bid on from jewelry and electronics to sporting event tickets and trenchless tools and equipment.

Once again, the popular Mortimer the Sewer Rat was up for bid. The popular Sewer Rat was not attendance due to some travel issues but the bidding for his yearlong service was fierce. The winning bidder for Mortimer was Michael Byrne and Iowa Trenchless.

In NASTT’s Tropical Vacation Raffle (announced at the Closing Luncheon and donated by Vermeer), the winner was James Kohne of Woodard & Curran.

The No-Dig Show is the place to unveil the latest in trenchless technologies and this year was no exception. There were many new products — rehabilitation and new installation — on the exhibit hall floor, highlighting the fact that the trenchless industry continues to grow to new heights. Joe Lane with HEBNA Corp. accepts the Innovative Product Award for Rehabilitation for the iMFL. Cody Warner and Brian Healey with Deep Trekker accept the Innovative Product Award for Rehabilitation for the DT340 Pipe Crawler.

Each year, NASTT recognizes these technological advancements through the Joseph L. Abbott Jr. Innovative Product Awards. Annually, two companies with state-of-the-art products are chosen as recipients of this honor. This year there were three, with two companies awarded for their products that advance the rehabilitation market.

This year, the Innovative Products Award for New Installation was awarded to Ditch Witch for its JT40 directional drill. Receiving this honor on the rehabilitation side were HEBNA Corp. for its iMFL, a series of advanced magnetic flux leakage tools that can inspect ferrous pipes through non-ferrous liner, and Deep Trekker for its DT340 Pipe Crawler, the world’s only remotely operated, battery powered crawler system. All three companies were recognized at the Gala Dinner. The annual Closing Luncheon, held April 12, gave everyone a chance to network one last time before heading for home. The luncheon also gives attendees a preview of what’s in store when the trenchless community gathers in 2018 in Palm Springs, California for the next NASTT No-Dig Show. Program Committee chair Jennifer Glynn handed the reigns over to Don Del Nero, who is the 2018 Program Committee chair.

The Call for Papers for the 2018 conference is out. Prospective authors are invited to submit a 250-word abstract outlining the scope of their paper and the principal points of benefit to the trenchless industry. The abstracts must be submitted electronically by June 30, 2017. NASTT’s all-volunteer Program Committee will meet in August to review the abstracts and select the papers that will be presented at the 2017 No-Dig Show. For more information, visit nodigshow.com.