While undersea outfalls are not unheard of, the construction of these outfalls wouldn’t necessarily fall under the category of routine either. A dedicated team of contracting and engineering firms recently completed construction of such an outfall and – for now – it’s one for the record books.

The completion of the 1.92-km outfall is one of the final components of the long-discussed McLoughlin Point Wastewater Treatment Plant for British Columbia’s Capital Regional District (CRD). Once complete, the $765-million, multi-year, project will provide tertiary treatment for wastewater prior to its discharge in the Strait of Juan de Fuca – an outlet to the Pacific Ocean and a bordering body of water between British Columbia and Washington. 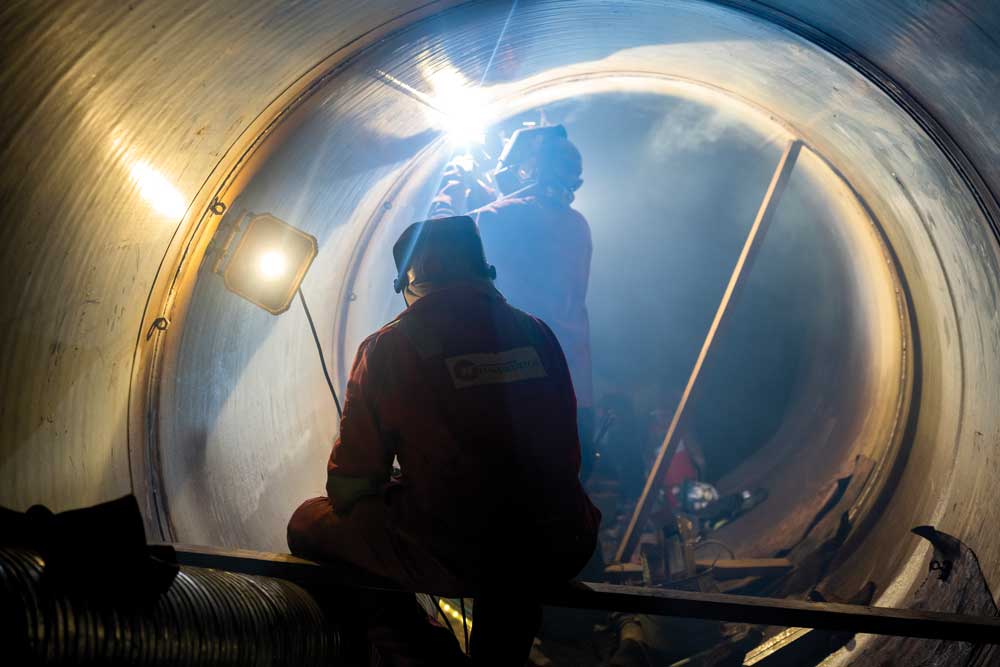 Workers for Michels Canada work on welds inside of the Permalok pipe installed as part of the microtunnelled portion of the project.

The CRD – which includes the province’s capital city of Victoria – is the last major coastal community in North America that discharges untreated sewage into the marine environment. Benefitting the core area municipalities of Victoria, Esquimalt, Saanich, Oak Bay, View Royal, Langford and Colwood and the Esquimalt and Songhees Nations, the project is being built to comply with federal and provincial wastewater regulations.

Tendered as a design-build project, construction of the treatment plant and the associated pipeline network is led by Harbour Resource Partners – a joint venture of AECOM Canada and Graham Infrastructure. Construction is on track for wastewater treatment by the end of 2020. AECOM Canada, Graham and subcontractors Michels Canada and Vancouver Pile Driving (Vanpile) completed the outfall portion.

RELATED: Improving the Marine Environment – HDD Under the Victoria Harbour

“[This] project has been contemplated for quite a few years and the [WWTP] project officially kicked off in March 2017,” says Jeremy Klarenbach, project director, Graham. “The outfall work began in November 2018 with some of the marine work. It continued in January 2019 with Michels Canada mobilising onsite to do the microtunnelling. Vanpile began the assembly of the HDPE pipe in March.”

The outfall extends 1.92 km due south off McLoughlin Point in Esquimalt, British Columbia and approximately 250 m east of the current raw sewage outfall. The inshore microtunnelled section was constructed with a 2,120-mm steel pipe and the offshore section was comprised of 2,250-mm DR26 HDPE pipe. The project originally contemplated cathodically-protected carbon steel pipe based on material availability. However, in 2018, Agru America opened its Charleston, South Carolina extrusion facility, making the larger diameter high performance HDPE available in North America. Prior to that, HDPE pipe in North America was limited to 1,600 mm diameter.

Though flow range is variable over the outfall’s 75-year design life, the ultimate design is for 430 mega litres per day. The design also took into account currents, waves, accidental contact from marine vessels and seismic activity.

Microtunnelling was the preferred method for the inshore section because it was less intrusive than other methods such as blasting an underwater trench. The latter would be considerably intrusive on the marine environment, and work is regulated by Fisheries and Oceans Canada. It was also sought after because of the small footprint available at the treatment plant project site. Because of tidal patterns and possible seismic activity in the region, microtunnelling with steel jacking pipe was not feasible for the entire outfall.

“The microtunnelling section is in bedrock from a blasted shaft at a depth of 12 m to clear the intertidal zone and environmentally sensitive aquatic life,” says Marv McDonald, C.E.T., project manager, Community Infrastructure, AECOM Canada. “The blasted trench offshore at 12 m meets the minimal depth of cover below low tide. It is a relatively short microtunnelled distance because just beyond the trench, the rock drops off and we are into bottom sediments, sands and clays.” The microtunnel portion required a wet exit and underwater retrieval of the boring machine.

For the microtunnelling, Michels Canada used a Herrenknecht AVN microtunnel boring machine (MTBM) to jack the 3-m sections of Permalok steel pipe. Crews worked in a single shift with production of about 3 m per day. According to McDonald, because of the abrasive granodiorite bedrock, Michels Canada had to stop about one-third of the way through the drive to inspect the cutter discs. After that point, if a problem were to arise, intervention would have been challenging.

As this was a wet-exit microtunnel, the project was designed with a custom bulkhead behind the MTBM, which allowed the machine to be removed and floated to the surface without flooding the pipe. A blind flange was installed on the inshore side of the pipe to keep the treatment plant site free of flooding. Additional work was completed to seal off the annulus and help protect the steel pipe from sea water.

The HDPE pipe was fused in Nanoose Bay and the sections were floated into the bay before being floated approximately 180 km to the project site.

“Once the MTBM was pushed out into the ocean – using a polyurethane grout – Michels sealed off the pipe as close to the ocean interface in the rock trench that we could,” McDonald says. “To seal off the majority of the annulus Michels pumped a specialized cementitious grout through the microtunnel lubrication ports in the pipe. It has a corrosion inhibitor to seal the annulus off and provide a bit of protection to the steel pipe.”

Additionally, a cathodic monitoring lead was added to the pipe for long-term monitoring and Michels Canada seal welded the pipe joints to ensure a leak-proof system. Once the plant is complete, divers will remove the blind flange to allow water to flow through the pipe.

“Construction is an active job of problem solving and that’s why we like working with engineers and other specialty contractors on these projects,” says Klarenbach. “Fortunately, we had some good subcontractors in Michels and Vanpile perform the work. They are an integral part of our one team approach to get the project done.” 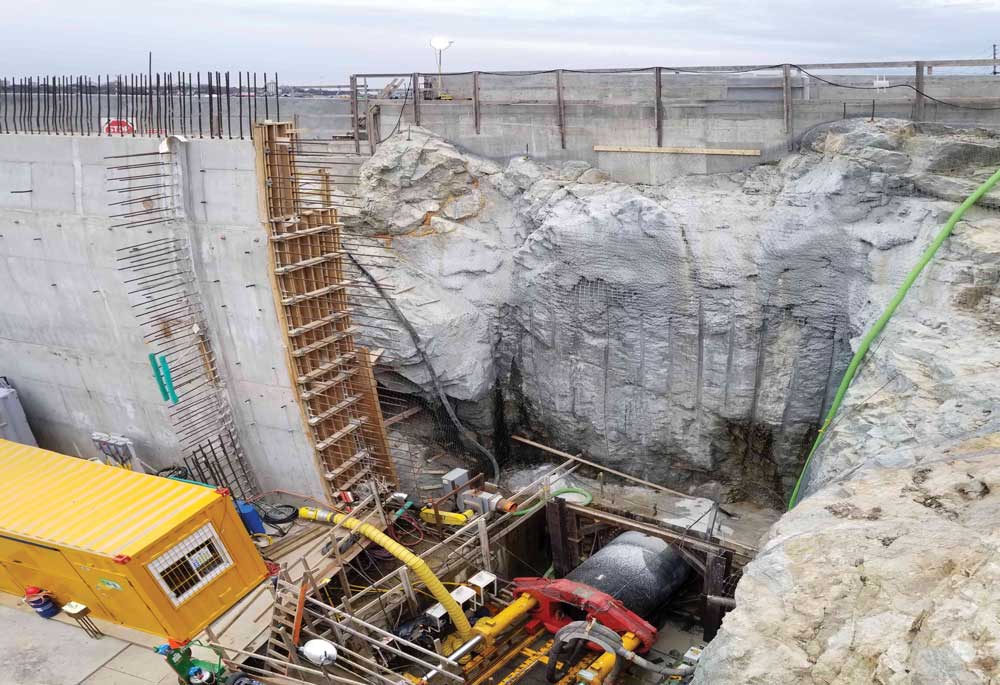 While the microtunnelling portion of the project was under way, Harbour Resource Partners and Vanpile coordinated the delivery and stringing of the 1,800-m section, which included a 210-m long, 36-port diffuser.

On a previous project, Vanpile had used a facility in Nanoose Bay, roughly 180 km by sea north of the project. Here, they would receive the HDPE, fuse it at roughly two sections a day and run the string into the bay where the precast concrete weights were attached. There were 350 ballast weights installed, each weighing 4.75 cubic metres.

“It went right from the East shore of North America to the West shore. The extruder in Charleston is located on the ocean with the intent that they extrude the pipe into the ocean and ship worldwide via tug,” McDonald says. “In our case, because we’re on the opposite side of the continent, it wasn’t economical to ship through the Panama Canal or the Cape in South America. Instead, the pipe segments were shipped by truck to Nanoose Bay.”

To ensure they were receiving a quality product, AECOM attended weekly pipe quality assurance sessions in Charleston, and the pipe was again checked in Nanoose Bay. Once the string was complete and pressure tested, it was floated down to McLoughlin Point via tugboat July 24 and 25, 2019. Vanpile coordinated the carefully-planned sinking process, which took about 12 hours from July 25 to 26. Though slightly delayed, the sinking was completed without a hitch.

“The day we installed the pipe, we had four cruise liners come in and leave port, which was quite interesting. If these cruise ships would back straight out of the harbour, they would probably contact the construction equipment,” says McDonald. “They had to turn coming out of the berth to avoid impacting our construction zone. It is also across from an active seaplane base, and we were working off barges with large cranes. There was a lot of aerial traffic almost every half-hour flying out of the harbour.”

Teamwork and cooperation were evident at every stage of the outfall installation and without it, the project would never work.

“This project took a high level of coordination among all of the stakeholders with Transport Canada’s harbour master and the Greater Victoria Harbour Authority and the runway users we had to communicate what our plans were,” Klarenbach. “There were a lot of concerns raised early on but we held information sessions with each of them and had a constant dialogue. When we got to actually perform the work, they understood what we were doing and we were informing them on a daily basis of what our next move was in, or around the harbour. We came out of this with no impacts to marine users, cruise ships or the seaplanes.”

A total of 15 project briefs were submitted for the inaugural No-Dig North National Project of the Year Award. Five were from NASTT’s Northwest Chapter, four from the NASTT British Columbia Chapter and six from NASTT’s Great Lakes, St. Lawrence and Atlantic Chapter. Volunteer judges, all active members of NASTT, reviewed and scored projects on uniqueness, difficulty in design/installation, innovation, as well as overall impression, quality of submission and general use of trenchless technology. The McLoughlin Point WWTP Outfall project scored high across the board. This was a result of unique and innovative concepts including design and facilitated construction by means of design-build delivery between AECOM and Graham Infrastructure. From blasting a 12-m deep jacking shaft, to microtunnelling 120 m through abrasive granodiorite bedrock to a ocean exit, the innovative use of trenchless technology allowed for successful project completion.