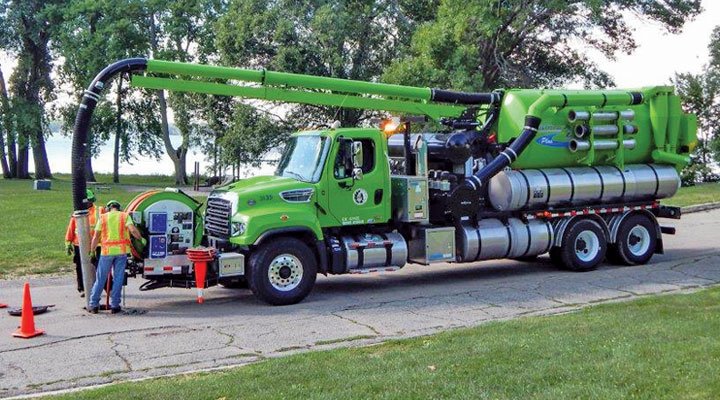 The purpose of a jet-vac combination system seems simple enough: Debris-filled sewer pipes are cleaned and sucked out using high-pressure water and a vacuum. But they are more than that to the cities that have made them the cornerstone of their regular maintenance and cleaning programs.

These systems are noted for their versatility in a wide range of applications, in addition to their power to get in and clean the most stubbornly dirty sewers, returning them to normal flow.

The City of Madison, Wisconsin, is one city that relies on the use of jet-vacs as an integral part of its preventative maintenance and cleaning program. With its regular cleaning schedule in place for years, Madison residents routinely see the city’s jet-vac combination systems at work on any given day.

“We use them every day and usually have three or four of our trucks going seven days a week, with all nine running Monday through Friday,” says Ben Gulvik, sewer maintenance technician II with the City of Madison’s Engineering Department, which is charged with maintaining its wastewater system. “They are a key component to our cleaning schedule.”

The City of Madison — the state’s capital city — encompasses 94 square miles and has a population of more than 250,000 people. Its sanitary sewer system — maintained by its Engineering Department — goes back to the late 1800s and today includes about 700 miles of sewer pipe, ranging in diameter from 5 to 36 in. The types of pipe that make up the system runs the gamut from vitrified clay in its oldest city sections to PVC, concrete, asbestos and cast-iron throughout the city. Depending on the section of the city, grease and roots are among the issues crews face.

“The shape [the pipes] are in is all over the board,” says Gulvik, whose been with the Engineering Department since 2003. “We have good pipes and we have some bad pipes. The good thing is that with the program we run, we know where are trouble [sections] are.”

The City of Madison has been using jet-vac systems as part of its program since the mid-1980s, albeit on a much smaller scale. Back then then, the City started with one unit (a Camel unit). Over the last 15 years, the program has expanded and today the City has nine jet vac combo units in its fleet — all Vactor 2100Plus systems — as well as a Vactor RamJet jetter.

“Jet-vac systems are really irreplaceable machines and are the heart of our operations,” Gulvik says. “They are really the Swiss Army knife of trucks [because of their versatility].

Beyond cleaning its sanitary sewer lines and storm sewers, the City uses its jet-vacs to clean its lift stations and wet wells. The units are used for vacuum and hydro excavation purposes.

James Streich, sewer maintenance supervisor for the City of Madison, concurs with that assessment, noting “What the cleaning [jet vacs] do is just far superior to back in the old days when everything was done with a rodder, which is really just a 1,000-ft toilet snake. The difference between using a jet-vac system and a rodder is just phenomenal.”

Streich, who has been with the department since 2004, says the use of jet-vac systems has upped the productivity and results of the city’s preventative maintenance program; the result being fewer backups. During the late 1990s, city crews responded to hundreds of sewer backups. Compare that to 17 backups the City had in 2016 and 2017 combined, he says.

Key to the program is making sure every single pipe in its 700-mile system gets a jet-vac cleaning at least once every three years. Some get a more frequent cleaning and with others cleaned out once a month.

“We don’t have any pipes that have gone five to eight years since they last got cleaned,” Streich says. “

They also include the storm sewers and catch basins in the cleaning schedule twice a year. These systems are done in the spring to clear out the sand and debris from the winter and then again in the fall to remove all of the leaves and seasonal debris.

The City also employs the use of two CCTV RapidView IBAK camera trucks, as well as PipeLogix software, for pipe inspection before and after.

Like most cities, Madison deals with a continual root issue and uses mechanical cutting means to keep the roots in check and the pipes they infiltrate clear. “They are our biggest nemesis,” Streich says. He goes on to say that through its careful database recordkeeping, the department knows which lines are more prone to root issues than others.