In the last several years, the Direct Pipe method of trenchless installation has moved from an emerging technology to a viable alternative to horizontal directional drilling (HDD) for relatively large diameter steel pipe in difficult soil conditions.

The Direct Pipe construction method is a one-pass, curved microtunnel installed using a modified microtunnel boring machine (MTBM). The steel installation pipe (casing pipe or product pipe) is advanced through the designed profile using a hydraulic pipe thruster assembly. The MTBM is equipped with articulated joints connected to internal hydraulic rams to provide the steering capability as the installation pipe is driven forward. This allows the pipe to be installed in both vertical and horizontal curves, similar to what is possible with HDD.

Like microtunneling, the hole is continuously supported and during installation the pipe is in compression. Direct Pipe is launched from a near-surface launch pit, so deep shoring is not typically required.

Recently, the authors were part of the engineering and construction team that designed and completed a Direct Pipe installation from the Gulf Coast of Texas into the Gulf of Mexico. The Direct Pipe installation consisted of installing nearly 5,000 ft of 42-in. diameter steel pipe using a 48-in. diameter Direct Pipe MTBM. The relatively thick 1.25-in. wall thickness pipe was used so the pipe would rest on the sea floor as approximately 1,000 ft of pipe was thrust onto the sea floor from the reception pit for a tie-in to an existing pipeline.


While an evaluation of the installation and operating stresses was completed during the design process, a generally accepted method to estimate the thrust forces required to install the pipe had not been developed. Estimates of thrust forces were based on methods developed for microtunneling and on data obtained from a limited number of completed Direct Pipe installations.


The installation thrust forces observed led the authors to question why the actual thrust force was so low and how to more accurately estimate them.

Currently, most engineers design for maximum pipe stresses induced by the pipe thruster machine and do not estimate the anticipated thrust forces. Of the more than 150 Direct Pipe installations completed to date, little information is publicly available about the thrust forces measured during installation.

In an effort to augment the data set, the authors published a summary of installation forces for the eleven Direct Pipe installations completed by Laney (Sparks and Hotz, 2019). The authors found that measured thrust forces do not correlate well with previous thrust force estimates based on length or surface area. The research indicated that the thrust force has a much stronger correlation with the total buoyant weight of the thrust pipe. 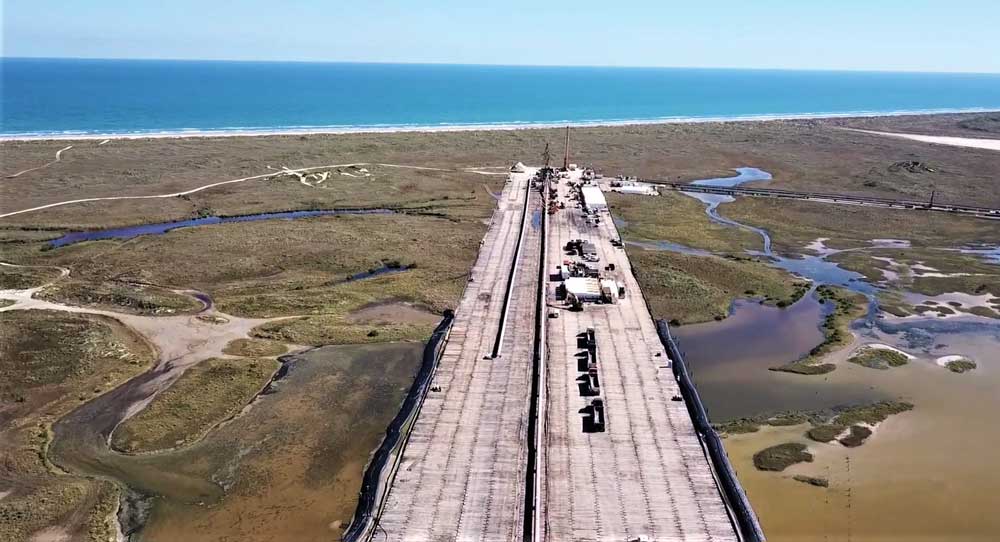 What the authors didn’t know in 2017 was that the measured thrust force has a strong correlation to the total buoyant weight of the pipe and a weak correlation to the length and surface area that was used in the initial estimates of thrust force for the Direct Pipe installation. Because 1.25-in. wall thickness pipe was used so the pipe would rest on the sea floor after it was thrust from the reception pit, the pipe was much less buoyant than it would have been for pipe normally used in trenchless installations. Using the thicker pipe reduced the total buoyant weight of the pipe in the lubricating fluid to approximately 200 tons from about 750 tons if 0.750-in. wall thickness pipe had been used. This reduction in buoyant weight of the pipe allowed the pipe to nearly float in the lubricating fluid and reduce the maximum thrust force measured during installation.

RELATED: Successful Premiere for Direct Pipe in the United States