Difficult projects are their strong point, according to D’Allessandro Corp. project manager Peter Piantedosi. The company has garnered a reputation as a contractor that can take on the hardest projects and see them through to completion. The company, based in Avon, Mass., recently bolstered that reputation on a difficult to access pipe bursting project in the City of Quincy, Mass.

“Most of our work comes to us as challenging. It’s the difficult jobs that no one else can handle,” Piantedosi said. “That’s the way we’re geared. The harder, more difficult, detailed work is kind of our niche. The company has grown from a two-crew company 25 years ago to 12 crews equipped to take on any challenge. There isn’t a job that we haven’t finished.”

For the project in Quincy, a section of vitrified clay pipe (VCP) sanitary sewer main near Quincy Bay had collapsed and needed to be replaced. The existing main ran along the banks of the Black’s Creek and feeds the Massachusetts Water Resources Authority (MWRA) Nut Island Headworks treatment facility. Black’s Creek is a tidal waterway, affected by the ocean tides. Every six hours the depth of the creek changes. A lock system controls the flow of tidal water. During the project, the City of Quincy closed the lock to keep the tide out while crews were working.


“D’Allessandro Corp. has a lot of pipe bursting experience. They’ve been in these challenging projects before and always come through,” said TT Technologies pipe bursting specialist Ric Micelota. “The Black’s Creek project did present some distinct challenges, but D’Allessandro always finds a way to overcome difficult conditions. 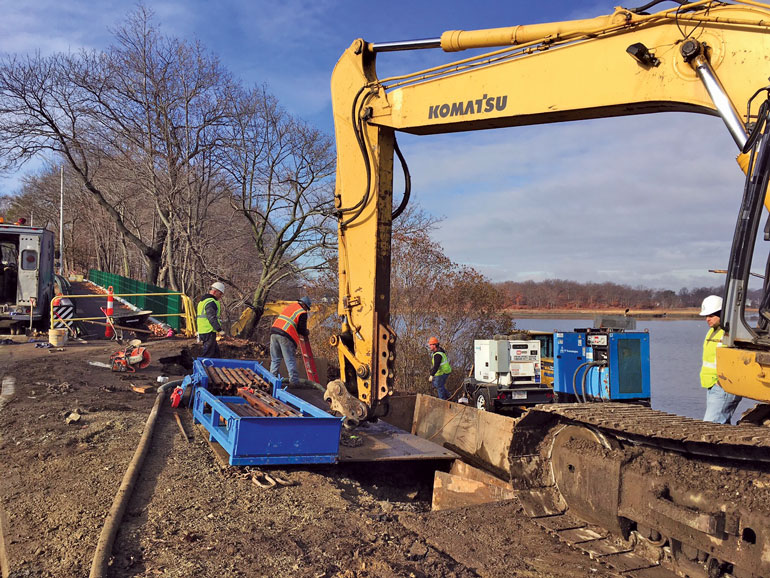 Jon D’Allessandro founded D’Allessandro Corp. more than 25 years ago. The multi-faceted utility contractor services customers in the municipal, commercial and private sector throughout the greater Boston area and beyond.

Safety is a top priority at D’Allessandro Corp. The company employs the services of an on-call, full-time safety auditing service that visits each one of the crews every other week on a revolving schedule. The company inspects, audits and provides a safety evaluation report to the main office.

“It’s all about safety. Everyone is expected to work safely. We encourage our team to take initiative, be responsible and go the extra step to make certain our clients are satisfied,” said Piantedosi. “All of our operations are carried out with OSHA safety and health regulations. Training is ongoing according to OSHA standards. Every level of the business strives for excellence in providing a safe and healthy work environment.”

The company conducts annual safety meetings and has a safety committee that meets once a month to review issues and provide recommendations on improvement strategies. In addition, the company conducts foreman’s meetings to review crew safety and holds daily “toolbox talk” meetings before work begins on any project.

With a significant service offering including water, sewer, drain, conduit installation, as well as above ground work such as road building, curbing, sidewalk, fencing and guardrail installation, D’Allessandro Corp. employs anywhere between 85 to 100 people, depending on the season. In addition to traditional construction methods, the company has been using trenchless pipe bursting for almost 20 years and is recognized as one of the most capable bursting contractors on the East Coast.

“Static pipe bursting continues to evolve. The method started gaining a lot of attention early on because the potential to burst and replace ductile iron and steel pipe. That was a significant accomplishment,” Micelota said. “The ability of static pipe bursting to facilitate the installation of various product pipe materials is also a big step. In the case of D’Allessandro’s project, static pipe bursting was used because the pipe was collapsed and rodding the existing pipe was a challenge. It would have been difficult to get a winch cable through the pipe for pneumatic bursting. So, the bursting rods of the static machine were a better option in this case.” The existing main ran along the banks of the Black’s Creek and feeds the Massachusetts Water Resources Authority Nut Island Headworks treatment facility.

In order to gain access to the collapsed sewer main, D’Allessandro crews first had to construct a road. “The site was extremely difficult to access. One manhole, which we needed to replace, was located next to a wooded area, along a 30- to 40-ft slope,” said Piantedosi. “But the challenge was getting the equipment we needed to the actual jobsite area.

“There were no roads or even access points to bring equipment in so we had to build a road along a narrow easement to get to the site. The road was built out of a dense graded stone product, 2- to 4-in., minus stone. We put that stone down and stabilized the slope along the roadway to accommodate the excavator, loader, pipe and bursting equipment.”

D’Allessandro crews also installed a silt fence onsite, as well as straw wattle to prevent any potential washout long the road. The grade change was about 20 ft from one end of the job to the other. D’Allessandro crews planned to burst the pipe from the shallow pit into the deeper pit. The layout of the job resulted in the launch pit being approximately 6 ft deep, while the machine or exit pit was approximately 18 ft deep. An 18-ft shoring box with 8-ft spreaders was used to secure the exit pit.

Crews then set up a dewatering system with a 3-in. pump for the launch and exit pits, as well as a 6-in. bypass sewer line, which ran for the duration of the project. Once all the equipment was in place, crews were ready to begin the bursting process.

“The 15-in. clay host pipe was broken, probably crushed, about 25 ft away from the manhole at the top. We were able to get the rods through which was one of the biggest concerns because of the collapsed pipe. The soil was decent for bursting, a boney gravel, because we were so close to the creek,” Piantedosi said.

After rodding the bursting rods through the host to the launch pit crews were able to attach the bladed rollers, expander and fused HDPE product and began pullback.

RELATED: Eisener Contracting Ltd.’s Owner Has an Eye for Innovation

While total prep time took around four days to create the access needed to facilitate the project and another day to put in the proper environmental protection features, actual bursting time took approximately 45 minutes. Once the new section of pipe was tied into the main and put back into service, site restoration took another four to five days to complete.

“This project again shows why D’Allessandro is the go to contractor for the toughest jobs. This highly skilled crew with the right equipment can get it done. They did a nice job on Black’s Creek,” Micelota said.