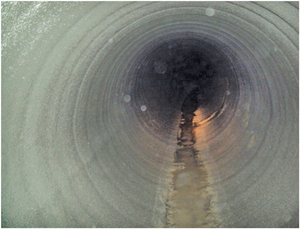 The City of Westlake, Ohio, got an interesting ‘wake up call’ in 2006, when a sanitary sewer interceptor line in nearby City of Lorain failed dramatically.

“It forced the evacuation of several dozen homes for months,” says Westlake director of engineering Robert P. Kelly, P.E., “We realized we’d better take a closer look at our system, because we have a similar interceptor arrangement in Westlake and our pipe is about as old as theirs.”

The interceptor in question was built in the 1960s and runs from west to east along Westlake’s northern limits, increasing in size from 36 to 60 in. Dozens of 18- to 24-in. trunk lines, serving the entire city, drain northerly into the interceptor. The arrangement is efficient and has many advantages. But there are a few weaknesses as well, such as a failed interceptor could affect all of Westlake. “There are about 70,000 people depending on our system,” says Kelly. “We simply could not allow a problem to develop.”

Interceptors are also particularly prone to microbiologically induced corrosion (MIC), an insidious plague of concrete sewer systems. In Westlake, the south-north trunk lines dump directly into the interceptor and are constructed with 24-in. drops to keep flows moving quickly, which unfortunately creates a great deal of turbulence. Turbulence, combined with organic waste, warm temperatures and oxygen, leads to high concentrations of hydrogen sulfide gas. The gas feeds colonies of Thiobacillus bacteria which excrete sulfuric acid — some strains of Thiobacillus can thrive in acid concentrations as high as 7 percent. The acid attacks concrete directly, turning it into crumbly calcium sulfate (gypsum). Once established, MIC works from the inside out to destroy concrete integrity in just a few short years.

The interceptor had been cleaned and thoroughly inspected at the 40-year mark. But five years later, the Lorain interceptor failed and Westlake retained URS Corp. to perform video inspection, do detailed analysis and prepare an emergency evacuation plan in the event of failure. 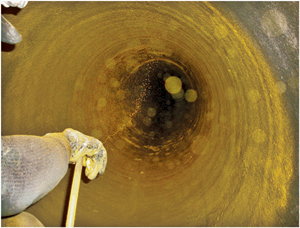 “We could walk inside the interceptor and chip away concrete,” Kelly says. “It was a real problem.” MIC had eaten away 1/2-in. to 1 1/2-in. of the concrete pipe’s inner surface.

There was some good news. According to the findings, MIC was confined almost entirely to within 25 ft of trunk line entry points. So, conceivably, Westlake could save money by focusing on problem areas and by leaving the rest of the interceptor alone. In theory, this would save about half of the cost of cured-in-place pipe (CIPP) rehabilitation, because the overall footage of rehabilitated pipe would be reduced by more than half.

But there were problems with that approach. CIPP is a well-proven technology for pipe rehabilitation but it was not a good choice for the particular situation in Westlake. For one thing, CIPP runs are generally manhole-to-manhole, and there is not much money saved by specifying shorter, partial runs CIPP is also not a good fit when pipe diameter changes, as it does several times in the Westlake interceptor. And finally, manholes that serve the interceptor are quite deep in places, and they would have to be excavated and dismantled to maneuver in felt linings — this was more work than Westlake wanted to do for a partial rehabilitation.

These small challenges added up to one big problem. Westlake was trying to avoid state or federal money for this project and had approximately $2 million available. “When we added up all the costs of our CIPP design, it came to over $3 million,” says Kelly.

In search of ideas, Smolik attended the Pumper & Cleaner Environmental Expo in Louisville, Ky. After a great deal of research and conversation, he returned with his options.

Centri-Pipe (centrifugally-cast concrete pipe) lining technology is offered by AP/M Permaform. In essence, Centri-Pipe is a way to centrifugally apply a layer or multiple layers of high-strength structural grout onto deteriorated pipe interiors at diameters ranging from 30 to 120 in. The grout products developed by AP/M Permaform are designed specifically for structural reinforcement, long pumping distances, rapid curing for quick return to service and high build of pipe crowns.

Using Centri-Pipe technology to apply ConmicShield-treated cementitious grout looked like a good way to overcome the challenges Westlake was facing. Centri-Pipe is a truly trenchless rehabilitation technology and since the equipment can be introduced to pipe interiors via manholes, excavation is avoided. More importantly, the SpinCaster can be started and stopped at any point in the pipe, and adjusted as needed for changes in diameter — it looked like a perfect way to focus on the interceptor’s problem areas, and realize the savings city officials were looking for.

“We thought it would work, so we put it to bid,” says Kelly, “There were not a lot of contractors who could do this, but we found one and the total costs came in at $1.6 million.” 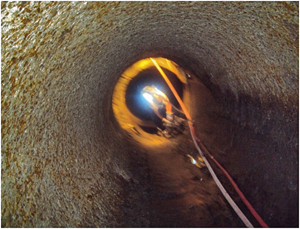 Contractors diverted flows around individual trunk line entry points by using 12-in. pumps to move waste overland. The pipe area that was subject to rehabilitation was cleaned and scoured with a high-pressure spin washer to remove loose material. As a final step before applying new grout, Westlake designers called for a ConmicShield rinse of the cleaned interior to be certain MIC could not develop behind the new liner.

After analyzing the interceptor’s interior diameter, water load, extent of damage and other factors, engineers determined that a half-inch liner of PL-8000 grout with ConmicShield would be optimum. This would repair and strengthen the interceptor and prevent corrosion while preserving flow characteristics.

In all, Westlake rehabilitated just 3,961 lf of interceptor, as opposed to the 7,200 lf that would have been required by manhole-to-manhole rehabilitation. The work began in 2009 and was completed about a year later.

Trying relatively new techniques and products is not always a comfortable position for city engineers, but the Westlake interceptor project shows that the rewards can be huge.

“This cost less than half of what the manhole-to-manhole cost would have been,” says Kelly, “and I believe the finished product is at least as good, maybe better. Because of this savings, we were able to use our own funds and do the work within a year. Those are huge wins.”