Published by TT Staff January 18, 2016 View Profile
As time passes, technology continues to advance and the failures of yesterday lead to innovations and successes for today’s construction projects.

That is more than obvious; in fact, it is exhilarating, when you dig into the history of cured-in-place pipe (CIPP). This is the pipe renovation process of choice worldwide. CIPP has continually advanced, improved and adapted to provide more and more solutions including difficult pipe configurations and lateral connections.

The failed attempts of yesterday were never really failures at all, well maybe some were, but like Thomas Edison once said, “These failures were just ways to prove how it couldn’t or shouldn’t be done.” And, the history of CIPP tells one heck of a story over the past 45 years. The industry has seen numerous installation methods, a variety of lining materials, and various ways of curing the resin saturated liner that ultimately produces results comparable to new pipe. The ultimate cure for the CIPP industry is to be “as good as new.” That means the long-term objective is to produce a long lasting new pipe designed for specific loadings, but to also remain watertight throughout the lifecycle of the new CIPP. The City of Toronto has been a longtime user of CIPP and trenchless techniques in general. With a population of more than 2.6 million and infrastructure dating back to the mid to early 1800s, you can be sure that over the years Toronto has had its share of challenges in maintaining its subterranean pipes. The City is familiar with the ASTM F2561 standard practice for renewing lateral pipes and for forming a non-leaking connection to the main pipe by use of a main/lateral liner outfitted with compression gaskets and over the years, many service lines have been renewed where the repair conforms to this industry standard.

When it came time to renew an old egg-shaped, brick-and-mortar sewer, city officials also sought a solution for renewing the service connections and forming a long-term watertight seal to the mainline liner.

The City prepared the tender and the project was awarded to D.M. Robichaud Associates. The Oshawa, Ontario-based company is no stranger to renewing service lateral pipes — having specialized in trenchless installations of cleanouts using small-bore vacuum techniques (ASTM F3097) and renewing service lateral pipes and rebuilding the main connection (ASTM F2561) since the early 2000s.

The Toronto project was a new challenge for the group, lateral lining and connecting to the egg-shaped, brick-and-mortar sewer measuring 900 mm tall and 600 mm at the widest portion. D.M. Robichaud knew that its crew and the selected technology had to conform to the high rehabilitation standards required by the City.

Today, municipalities are demanding more design criteria for achieving long-term water tightness. What they really want is for the renewed pipe to be “as good as new!” LMK Technologies supplied the materials and expertise necessary for the Robichaud crews to make the watertight service connections using the LMK Lapel Liner. The technique used to renew the Toronto sewers is simple. It relies on man entry in larger diameter pipes, yet is unique as the design relies on mechanical fasteners attaching the liner system with a rubber flange shaped compression gasket to the main pipe.

The project limited the crew’s work in the roadway from 9 a.m. to 3 p.m., which is a short workday when you consider setting up traffic control, workers mixing resin and saturating the liner tube and moving through the old brick pipe to the point of the lateral repair.

The crew prepared the resin system by mixing the catalyst and resin saturating the liner assembly onsite. The crew utilized a liner vacuum saturation process and transported the liner in a protective bag through the main pipe. The liner is then handed off to a two-person crew that scurried through the old egg-shaped pipe as safe and as fast as possible. The main pipes had previously been lined using CIPP, which made cleaning the mainline fairly quick and easy. When the two technicians reached the service connection, they set up shop. Their first course of action was to “make the connection.”

“The system is fairly straight forward; we set the gasket, inverted the liner and screwed to the pipe wall,” says Sean Wade, D.M. Robichaud lining technician.

The connection seal and lateral liner consists of an invertible liner tube and a stainless steel backing plate outfitted with a series of holes similar to that of a pipe flange. The watertight seal is made by a compression gasket designed for the unique shape and curvature of a lateral opening in a main pipe. The backing plate is aligned with the service opening and is anchored to the host pipe by means of stainless steel fasteners. The anchoring of the plate compresses the gasket forming a watertight seal and ensures the connection won’t fall away like the old-style top hats. In the old days, contractors claimed they had “special resin” that didn’t shrink and would even bond to the wet greasy sewer pipe. 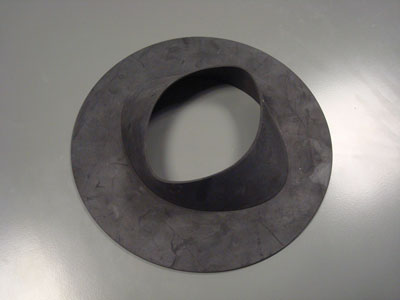 The watertight seal is made by a compression gasket designed for the unique shape and curvature of a lateral opening in a main pipe.

The trenchless industry has advanced leaps and bounds over the years and today the notion of bonding CIPP to a wet, greasy sewer just doesn’t work, especially for 50 years. In fact, more and more engineers are requiring design calculations for all types of pipe repairs, including the water tightness of service connections.

The technicians were efficient cleaning and prepping the lateral pipes, many that had large amounts of concrete. The crew was able to renew as many as six service connections in the short workday.

“Simple, effective, and quick. The system is rather adaptive to each service and being placed by hand, the precision provided results in a perfect installation,” says Jordan Ellis, D.M. Robichaud lining technician.

The project includes more than 500 service connections —services in small diameter pipe were repaired using the LMK T-Liner and in larger pipes, the Lapel Liner was used. There were no homeowner interruptions whatsoever; all the work was completed from within the old egg shaped sewer.

“You sure don’t want to ever dig by any of these old beautiful hand crafted brick-and-mortar sewers and now that the main and the service connections have been rebuilt and sealed with CIPP/ gaskets, the city can expect another 50-plus years of service,” says Wade.

Larry Kiest, Jr. is president and founder of LMK Technologies.