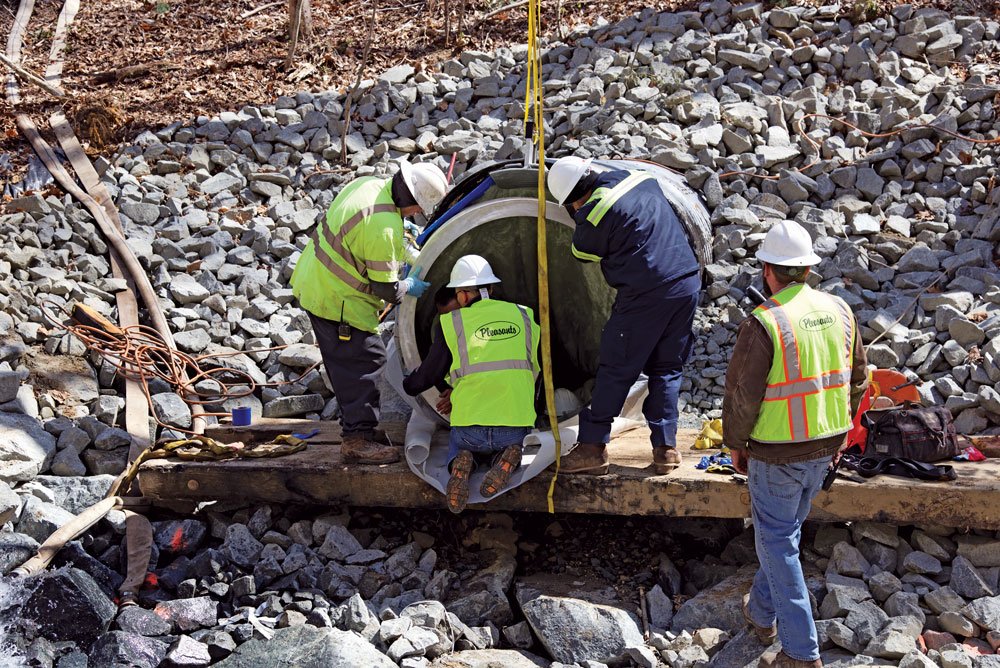 Challenges and obstacles are a common occurrence around the Washington, D.C., metropolitan region and it does not always involve politics.

Situated just southeast of Washington, D.C., and nestled along the shoreline of the Chesapeake Bay, is Calvert County, Maryland. Established in 1654, Calvert County is one of the oldest counties in the United States. Due to the age of its buried assets, a lot of its infrastructure has reached the end of its designed life-cycle.

The Calvert County Department of Public Works (DPW) is faced with the same issues as most municipalities across America — Where do you find the financial resources required to address all of the department’s needs? In the past, maintenance repairs usually occurred once a problem was discovered; at which time they would dispatch their crews, or a contractor, to address the issues. Often, this would result in excavation and open-cutting of the road to fix the problem.

In more recent years, Calvert County has implemented a program based on proactive preventative maintenance to begin evaluating its underground assets in order to identify areas of concern and prioritize repairs needed to their infrastructure. Pleasants Construction, a Maryland-based construction company, has been working with Calvert County on various rehabilitation projects for the past several years through its Underground Rehabilitation Services division. Pleasants Construction is a Certified Installer for Reline America, covering the Mid-Atlantic region of the United States. 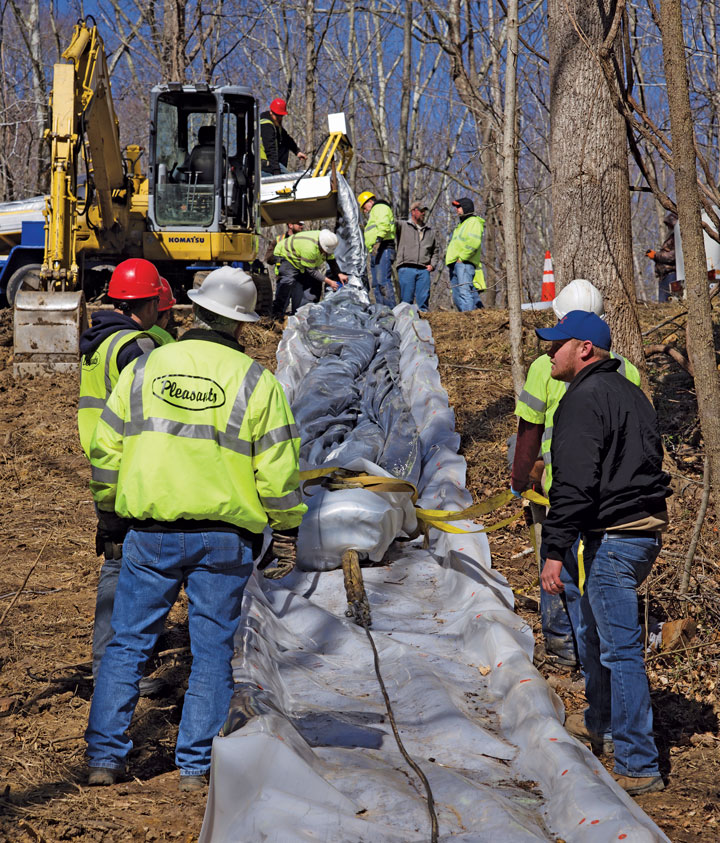 Last year, the county identified a 60-in. diameter corrugated metal pipe (CMP) underneath a roadway that was showing signs of corrosion. Numerous issues came into play with this particular pipe. Workers would have to excavate more than 50 ft deep in order to expose the pipe for replacement. Additionally, the storm pipe traversed a road that happened to be the sole entry into a residential neighborhood. Closing the road for a week, or more, to dig and replace a pipe that deep was not feasible because it would prevent people from entering and exiting the neighborhood. To add to its list of challenges, the slope from the roadway to the pipe openings was 45 degrees and an active stream was running through the pipe itself.

Pleasants Construction and Calvert County representatives met onsite and it was determined that this project was a prime candidate for repair using Alphaliner, an ultra violet (UV) cured glass reinforced pipe (GRP) liner. However, the largest Alphaliner being made at the time by Reline America was a 54-in. diameter liner. Reline America is a Virginia-based, U.S.-owned company that manufactures UV GRP liners sold under the trade name Alphaliner.

RELATED: UV-CIPP an Ideal Fit for Rehab Under Maine Turnpike

Several issues have been catalysts behind the need for larger diameter UV GRP liners. Firstly, with municipalities and communities requesting the use of products that are more environmentally friendly and with reduced disruption to the public, the demands on UV GRP manufacturers to increase their product size offerings has grown. Secondly, as more agencies become familiar with UV GRP, and it grows in popularity, they are seeing the huge benefits of using the technology and recognize the incredible strength the liners offer while having minimal impact on the reduction of the inside diameter of the pipe. Thirdly, the built-in quality control measures with this particular technology are becoming more appreciated and specified.

Fortunately, for the parties involved with this project, Reline was already in the process of increasing its upper size range due to these market forces. 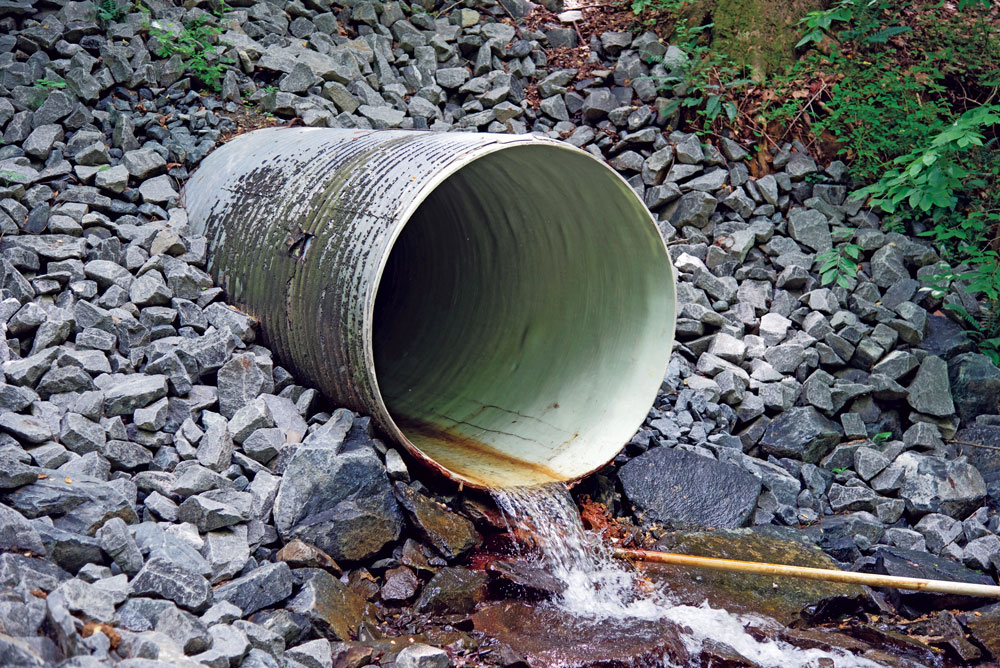 Project Is a Go

In the spring of this year, Calvert County contracted to have the pipe lined. Several obstacles still had to be addressed. The stream had to be damned and bypass pumps needed to be installed to divert the flow of water. Secondly, some trees had to be cleared in order to transport the heavy liner down the steep embankment.

To assist with transporting the liner from the delivery container down the hill and into the pipe a slip sheet, a heavy sheet of plastic, was placed down the hill forming a makeshift slide. On a normal installation one winch is required to pull the liner through the pipe. However, this was no normal job. A second winch was used control the tail end of the liner as it was being pulled down the slip sheet to prevent the heavy liner from accidentally crashing down on itself.

Once the liner was in place, packers were installed and the light train was inserted into the liner. The ends were then capped off to allow for inflation. Upon full inflation, the light train traveled the length of the pipe utilizing its built-in cameras to ensure the quality of the liner prior to the beginning of the curing process. Once the pre-inspection was completed, the Quality Tracker System ignited the UV lights to start the curing process. The project was completed in one day.

As part of the project, Calvert County took the opportunity to do some stream restoration work, as well as restore the vegetation and trees that were disturbed during the process.

“Calvert County’s employees were great to work with. They cleared an access path for the liner and they handled all aspects of the stream diversion. Their Department of Public Works employees were very responsive in providing the necessary support and resources to make the project a success!” said Pleasants Construction director of construction Ron Callahan.

This project was a milestone for both Reline and Pleasants Construction because it was their first UV GRP installed in North America.