The City of San Diego’s Metropolitan Wastewater Division has been rehabilitating its deteriorated sewers for nearly 20 years.

Before 2000, the City had a chronic problem of sanitary sewer spills with hundreds of sewer overflows each year, largely due to root intrusion and deteriorating pipe joints. As part of an agreement with the U.S. EPA agreement, the City embarked on an aggressive Sewer Spill Reduction Program.

The key elements of this program included cleaning all 3,000 miles of the Municipal Sewerage System. Other initiatives included developing a system-wide cleaning schedule, televising and assessing the condition of more than 1,200 miles of the oldest and most problematic sewer lines in the system and increasing the number of miles of sewer lines replaced or rehabilitated from 15 miles per year to 45 miles per year.

Since the program was implemented, the City has reduced the problem dramatically. In 2001 the City had 365 sewer spills – an average of one a day. By 2015 that number was down to 35; which is more than a 90 percent reduction. “We’ve reduced the problem dramatically and anticipate even fewer overflows as we continue to renew our sewers,” said Craig Whittemore, P.E., senior engineer for San Diego’s Metropolitan Wastewater Division.

According to the City, the current estimate for dig and replace projects is approximately $2.3 million per mile. However, by utilizing modern trenchless methods, the cost drops to about $800,000 per mile; a difference of $1.5 million every mile. Looked at another way, San Diego can rehabilitate almost three miles with trenchless technologies for every mile they dig and replace.

To prepare its bid packages, the City refers to “Standard Specifications for Public Works Construction” better known as “Green Book.” The publication’s purpose is to further the uniformity of construction standards in the industry.

Products and materials that are used for sewer construction and rehabilitation must pass rigorous performance testing per Green Book Section 211-2 Chemical Resistance (known as the Pickle Jar Test). This is an accelerated aging test used to determine the physical properties and weight change of material specimens after exposure to a chemical solution. This qualification test can then determine if a liner material is fit for sewer applications and can meet a minimum 50-year design life.

The City will only use products that have passed this testing protocol. Sekisui PVC liners easily passed this test and were included in the “Green Book” in 1998 per Section 500 Pipeline Systems Rehabilitation.

The City prepares performance-based specifications for each project. The bid packages allow the contractors to bid the lining method that best meets the project design and constructability challenges. Furthermore, the City requires all lining systems to be sealed at the laterals using a SLC or Lateral Lining System. The SLC’s are installed post rehabilitation by the lining contractor or their listed sub.

As of 2018, the City has inspected more than 2,040 miles of sewer and have identified 779 miles for replacement/rehabilitation. More than 300 miles of sewers have been rehabilitated with more slated for repair.

Since 2001, Sekisui licensees have bid on more than 50 sewer rehabilitation projects and to date have installed 1 million-plus ft of SPR-EX liners on city projects with several projects currently in construction.

Though the mandatory repairs as outlined in the EPA Consent Decree were completed in 2015, the City continues a robust rehabilitation schedule. The current Capital Improvement program is funded through 2024 with an annual goal of 40 to 45 miles of sewer to be replaced or rehabilitated per year. With the cost savings associated with trenchless technologies, the focus is to use structural liners where possible. 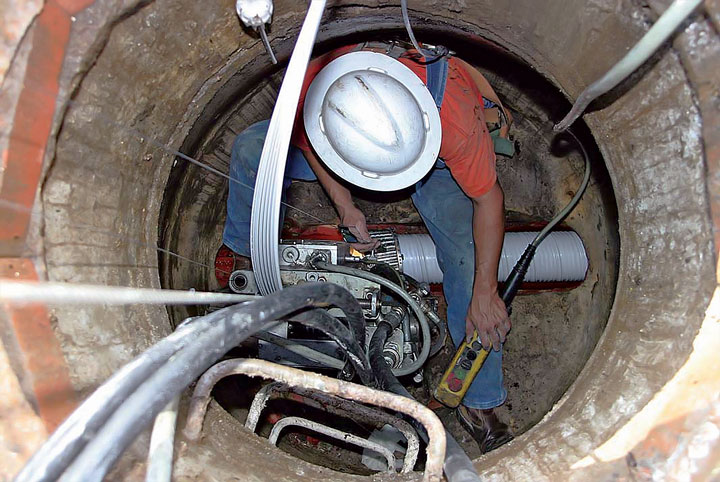 Since 2001, Sekisui licensees have bid on more than 50 sewer rehabilitation
projects for the program and to date have installed 1 million-plus ft of SPREX
liners on city projects with several projects currently in construction.

The SPR-EX installation process consists of a single strip of PVC profile which is fed from an above ground spool into the winding machine located at the base of the manhole or access chamber. The winding equipment spirally winds the PVC profile strip into the deteriorated pipeline at a diameter initially smaller than the host pipe. The profile forms the liner by locking together in a spiral fashion using the two locking mechanisms on the profile’s edge. The secondary lock is then cut once winding has stopped, allowing the liner to expand and tightly fit against the host pipe.

Sekisui SPR-EX liners offer San Diego numerous design and constructability advantages. First, the mechanical installation process allows for Spiral Wound liners to be installed in live flow, typically without the need for bypass pumping. There is no adverse effect on the installation equipment or profile when exposed to flow.

Additionally, as there is no styrene or contaminated process waters to dispose of, Sekisui Spiral Wound liners are safe to install even in environmentally sensitive areas. The construction footprint is small and the installation is fast and efficient. Furthermore, laterals can be immediately re-instated as there is no wait time for liners to cure or cool down which minimizes the social impact to residences and businesses. All these constructability advantages have provided the City with a cost-effective repair alternative to more expensive dig and replace construction practices as well as other trenchless rehabilitation methods.