The 5 Most Important Manhole Inspection Items

Oftentimes I’m asked why it is important to complete manhole inspections. Manhole inspections should be performed during wet weather, or when the groundwater level is at its peak. Ideally November to May is the better time for manhole inspections to detect inflow and infiltration. With the snow/ice melt in February and March compounded with heavy rains cities and towns will experience peaks at the lift stations and wastewater treatment facilities.

Below is a list of the five most important items to look at during manhole inspections that will help reduce inflow and infiltration, or eliminate potential backups.

One of the most observed items during a manhole inspection is the manhole chimney. As you can see below (and above), the manhole was constructed of precast with the exception of the manhole chimney that was constructed out of brick. During dry weather it may appear to be in good shape; but when the groundwater rises or heavy rains appear you will see a different story as shown below. Example shown below of a brick chimney at the start of a rain event, and after the rain has set in for 30 minutes…hard to believe it’s the same manhole with slightly different conditions. The inflow that was observed to the right measured 7 gallons a minute. It is a good idea to have a construction inspector on site during sanitary manhole installation. It is also a good to have a construction inspector complete a final inspection and sign off prior to muncipality or utility taking over the sewer system. After construction there is typically a three-year maintanace bond and inspection that should take place, but oftentimes forgotton. Many times, I have seen offset frame and covers during the final grading, or not properly marked in fields that are hit by farm machinary.If these manholes are in depression areas the amount of Inflow could be catastropic to your sewer system. Below is a photo of a manhole that was hit during the final grading and never corrected by the city. Improper sanitary sewer manhole stack out during construction. Cities and towns have a set of plans, specifications and details that contractors are to follow during construction. Contractors are to supply the muncipality shop drawings to indicate what product they are getting. In many cases the contractor does not take the time to follow the details or specifications which will result in a poor final product resulting in Inflow and Infiltration. Below are a few examples of what I look for that was missed during installation. The photo at the top is an example of a contractor not using the proper concrete adjusting ring, in lieu of brick, stone and whatever else he could find to get the manhole to grade. This will allow for Inflow and Infiltration to enter the chimney during wet weather. The photo in the center is of an O-Ring gasket that was not secure during manhole installation. The O-Ring is desgned to help maintain a water tight seal at the joint; this will result in active Inflow and Infiltration at this location. The bottom photo is an active joint leak due to contractor failing to use the proper amount of Kent Seal which acts as a water stop on each side of the O-Ring gasket when the manhole is stacked out, or lack of not applying the recommended amount of Butyl Rubber on the exterior joint and wrapping with plastic to ensure a water tight joint. 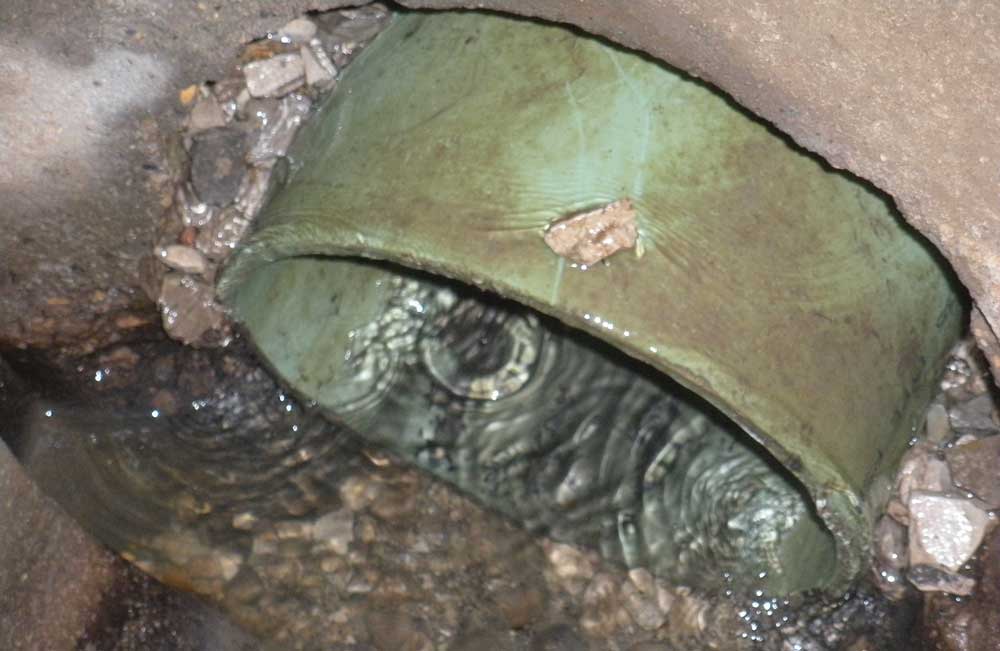 It is a good idea to inspect the sanitary sewer system after a heavy rain to see if surcharging has occurred to help identify an obstruction in the line segment. Below are photos of a before and after surcharge; hard to believe this is the same manhole only minutes after the obstruction was removed. It is a good idea to have the sanitary sewer lateral enter the main and not the manhole. It appears a high spot exists in the center of the channel causing backup to three residents. Unfortunately, this will be a continued maintenance nightmare for the city. Other items that have been observed during manhole inspections include a string line still tied off in a manhole through the pipe for a mandrel test. My question was the mandrel test ever completed before the sewer went on line? Or did the contractor forget to remove the string? Also observed was 1.5-in. PVC sump pump line that was hammer tapped into the existing manhole. Sump pumps are not to be connected to the sanitary sewer system, and should be disconnected and rerouted to a storm sewer or ditch.

The photos that you have seen are of precast manhole structures that have been installed within the last 10 years. The unfortunate part is the city and towns will now have to spend money on sanitary sewer rehabilitation to correct the items above.