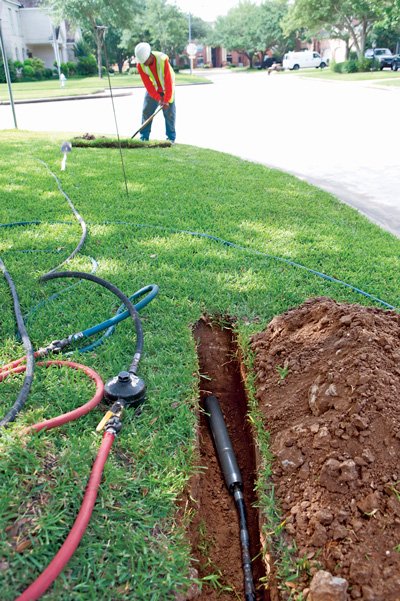 Using Earth-Piercing Tools to Install Up to 3,000 ft of Fiber-Optic — Complete with Restoration — by Lunchtime 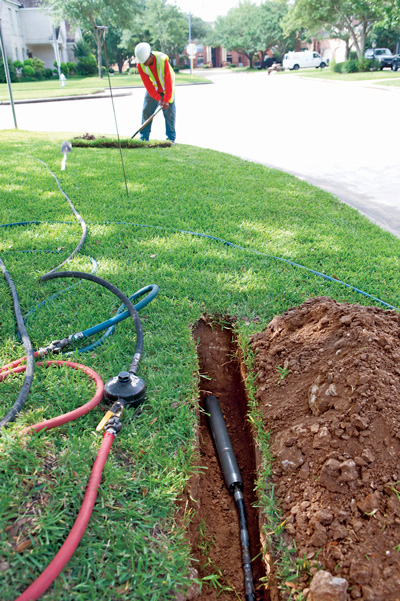 Since the Mole requires only a narrow 4-ft long access pit, excavation and renovation are minimal. In the hands of an efficient contractor like Advance Underground Utilities, as much as 3,000 ft of fiber-optic cable with service pedestals can be installed, backfilled, tamped, sodded and watered before the crew takes lunch.

Installing new fiber-optic service in the Triassic Basic soils of the Raleigh-Durham area of North Carolina could be accomplished by means of traditional horizontal directional drilling (HDD.)

But there is a faster, more cost-effective method: use of small pneumatic percussion earth-piercing tools in a method known as stitch boring. It is ideal for the narrow residential lots of suburban Raleigh’s neighborhoods that consist of soft to medium-hard ground conditions of petrified clay, sticky clay, soft rock and sand.

“Stitch boring is not a replacement for HDD. HDD will always have its place, especially where there is rock,” says Chris Alexander of HammerHead Trenchless Equipment, manufacturer of HammerHead Mole earth-piercing tools.

“But if you have to pothole services every 30 to 40 ft anyway in soft soils to medium-hard rock, it just makes sense to use a contractor like Advance Underground Utilities, who excel at using the Mole. They really prove how efficient it can be. For instance, not long ago they had one crew that installed over 3,000 ft, from access excavation to completed restoration, by lunchtime.”

Although Advance has only been using piercing tools for less than two years, the contractor has streamlined the stitch boring technique into a high production process. The small piercing tool’s many advantages stem from its ease of deployment, minimal equipment outlay, reduced excavation and restoration requirements and low cost of ownership.

The tool itself is 3 in. in diameter and 44 in. long. It operates on 110 psi supplied by a common 185 cfm portable air compressor. Advance uses a mini-excavator to dig an entry pit about 20 in. wide by 4 ft long.

“It only takes a minute of watching their process to know why it’s called ‘stitch boring,’” Alexander said. He recently visited a jobsite where an Advance crew was working. He described what he saw that morning.

First, the excavator operators dug an access pit about 20 to 24 in. wide. Then one of the crewmembers brought up a compressor and Mole while the excavator moved down to dig the next access pit.

Then one of Advance’s dedicated Mole “shooters” set the Mole in place and began the shot. Azimuth corrections were made once the Mole began penetration by prying against its body with a spade until it was on target. Alexander said that Advance dedicates certain crewmembers as its expert shooters who perform 15 shots or more a day. This ensures Advance of an exceptional on-target success rate. But even if a Mole is deflected a little in route, it would usually just require a little widening of the pit to one side or another to find it and successfully complete the run.

After setting one Mole on target, the shooter moved up to the next hole, where another Mole was waiting. He began that shot while the first was still completing its run.

After the Mole was retrieved, mule tape attached to the Mole was used to draw in the fiber-optic conduit. Where two conduits were to be installed, the Mole was run a second time using a 4-in. expander to accommodate the extra line. 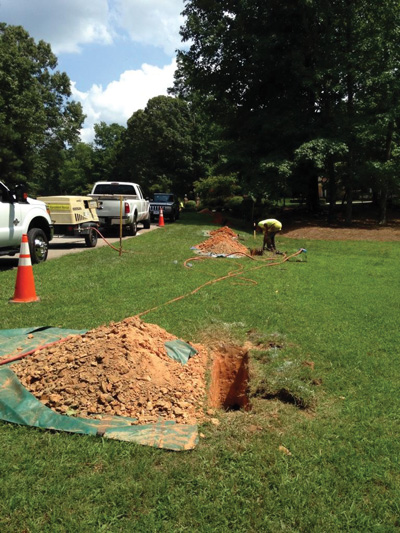 Owners of lots where work had begun after they left for work return home to find little evidence that anything happened on the property while they were away.

The next crewmember installed a service pedestal in the pit. He was followed by another crew member who backfilled it. Then a tamper and sod man came in behind him. Brooms followed along behind to clean up any soils on the pavement. Yet another crewmember watered the sod. And this line continued moving, from one residence to the next.

Alexander said, “Ant picnic – that’s the best way I can describe it. In a short time, you have a line of busy men, activity spread out down the street for 2,000 ft, all busy at their tasks, working efficiently in one long, streamlined production line. By lunch, on this job, they had completed 2,200 ft.”

Stitch boring presents a multitude of benefits, especially in the hands of a good Mole contractor like Advance, who not only optimizes the installation process but goes the extra mile to ensure good customer service. “They always have one crew member who works quality control. His job is to make sure any problem, any problem at all, is fixed before anyone has time to ask for it to be fixed. Their policy is, ‘We want everyone to be happy.’”

And everyone does have reason to be happy, Alexander said. Owners of lots where work had begun after they left for work return home to find little evidence that anything happened on the property while they were away.

The utility owner is happy not only for the rapid installation rate and savings in cost, but with the significantly reduced number of complaints they hear from customers, who don’t have a mess in their front yard when they come home or have to put up with heavy equipment blocking their street or driveway.

Alexander repeated that stitch boring with an earth-piercing tool should not be considered as a replacement for HDD: “HDD will always have its place, especially where there is hard rock. But in soft to medium-hard formations, in narrow suburban neighborhoods where you’re going to be potholing every 30 to 40 ft anyway, there is just no comparison. Stitch boring with a Mole is really the only way to go.”