100 years. That is an incredible achievement no matter what your business is. Such a milestone speaks to the industry the company serves, as much as it does to the company itself.

Spiniello Companies (Spiniello) is one of these companies and the countdown to its centennial celebration is on. 2022 will be here in no time. But until that time, the New Jersey-based trenchless and civil construction contractor continues to provide cutting edge trenchless work and push the innovation envelope when it comes to challenging rehab projects.

Spiniello has worked and prospered through a tumult of recessions, the Great Depression, as well as World Wars I and II. The company has bucked the growing trend in recent years of private equity firms and larger companies gobbling up contractors and consolidating the market.

The best is yet to come, company officials say.

Although ownership changed some 20 years ago, it did not change the trajectory path for Spiniello. Emil Solimine, who had a background in construction bonding, bought Spiniello Companies in 1998 from his good friend Jimmy Spiniello, whose dad Virgil started the company in 1918 and later incorporated it in 1922. Today, the company is run by Emil’s son EJ Solimine, who succeeded his father as president in 2015. Emil, now in his 70s, remains a very active CEO and presence in the day-to-day operations.

“My father loves the business, loves the people who work for us, and is actively involved every day,” EJ Solimine, 37, says. “It’s great that he and I can work shoulder to shoulder and we really enjoy what we do.”

Together, the father and son duo have kept Spiniello Companies at the top of its game and continue to look for ways to expand its presence, as well as grow its offerings and workforce. Once just a traditional heavy civil and utility construction contractor, today, 70 to 75 percent of the company’s revenue is generated by the trenchless market — a market that continues to reach higher and higher levels each year. 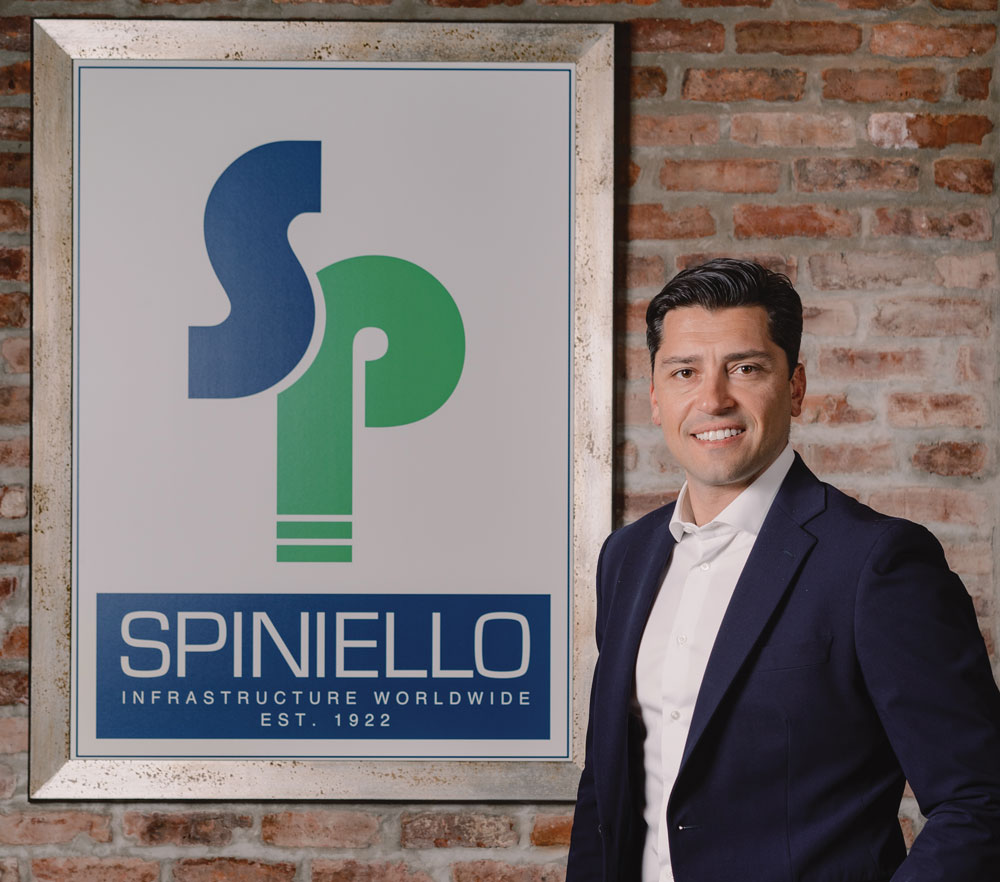 EJ Solimine took over as president of Spiniello Companies in 2015. His father, Emil, acquired the company in 1998.

Working in trenchless is nothing new for this nearly-century-old company. The Spiniello family had the foresight to realize the effectiveness that trenchless rehab methods add to revitalizing our infrastructure. First, it was cement mortar lining (CML) during the mid-1940s and then it was cured-in-place pipe (CIPP) during the 1980s.

Today, Spiniello Companies boast a trenchless rehab repertoire of CML, CIPP (using water, steam and UV curing options), pipe bursting, sliplining, shotcrete, carbon fiber, tunneling and bypass pumping, in addition to new construction options. The contractor has even garnered the Trenchless Technology Project of the Year Award a few times over the years, most recently in 2019.

“Trenchless is a fantastic solution. We definitely see it growing across the country. As more technologies improve, we’re going to continue to see growth in [the trenchless] market,” says EJ Solimine. “We pride ourselves on renewing the past and building the future.”

When Virgil Spiniello started his New Jersey contracting company all those years ago, he focused on utility and heavy construction services. The company enjoyed a steady, growing business even during the Great Depression years, which brought an influx of public works projects around the country into the construction market — a perfect fit for this contractor.

During the post-World War II construction boom, Spiniello expanded its services to include in-place cleaning, repair, and rehabilitation of underground pipelines. In 1946, the company completed its first in-place cleaning and CML project — a rehab service that it still provides today. Spiniello, within the next decade was rehabbing pipes ranging in diameters of 3 through 250 plus in. The company also expanded its CML capabilities to include the application of reinforced steel and welded wire fabric, enabling it to structurally rehab larger diameter pipes.


During the late 1980s, Spiniello further broadened its rehab solutions to include CIPP and sliplining.

“Jimmy and his father Virgil (Spiniello) were real visionaries and pioneers in the industry,” Solimine says. “They saw an opportunity in the trenchless space going with CML, which is generally not a structural repair and is specific to water mains [but] is much less disruptive to the public and is environmentally friendly. They also saw a huge opportunity on the sewer side, which was CIPP. A lot of pipe replacement was cost-prohibitive, and they realized that rehab was the wave of the future and was so much less disruptive than new construction.” 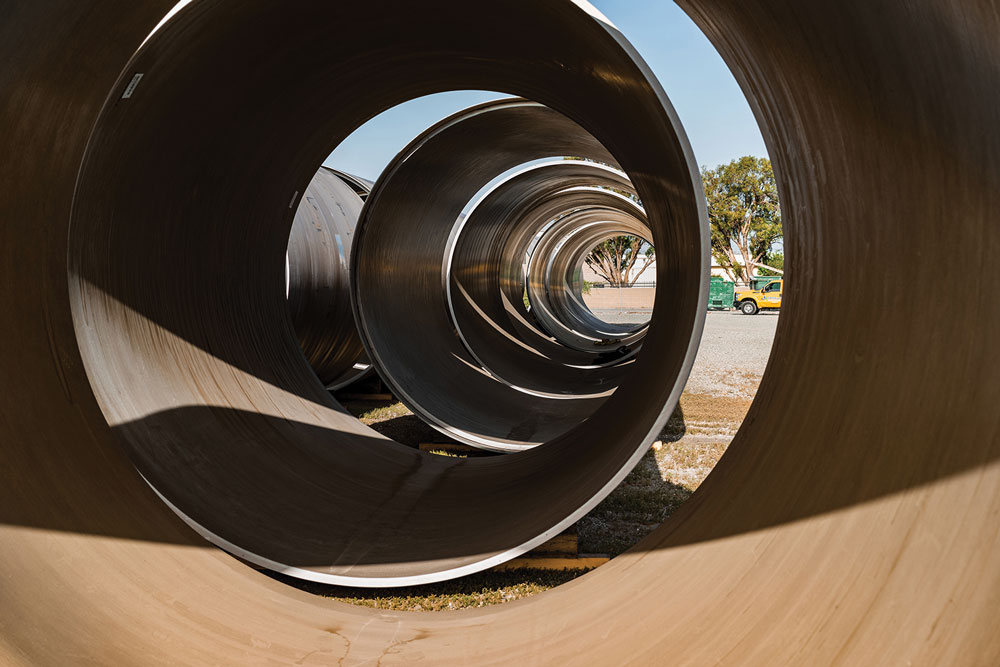 The contractor’s trenchless work runs the gamut from CIPP to pipe bursting to sliplining.

Solimine also relates the thought process of why Spiniello expanded its business to California, explaining that because CML mostly requires aboveground bypass, work on that type of project was halted during the winter months of the East Coast and tri-state areas. “In an effort to keep the workforce working and well established, they had to work in areas where the temperatures and the weather were more conducive to year-a-round production,” he says.

After Emil Solimine took hold of the company reins in 1998 — keeping the Spiniello moniker as it had grown into a well-respected and recognized construction name — he continued to build on the company’s strengths. EJ Solimine joined him in 2006 after he graduated from college, and the pair eventually became co-owners of the company. Before that, EJ Solimine started at the ground level of the company as a laborer to learn about construction and the company from the bottom up.

RELATED: Relining on a Grand Scale 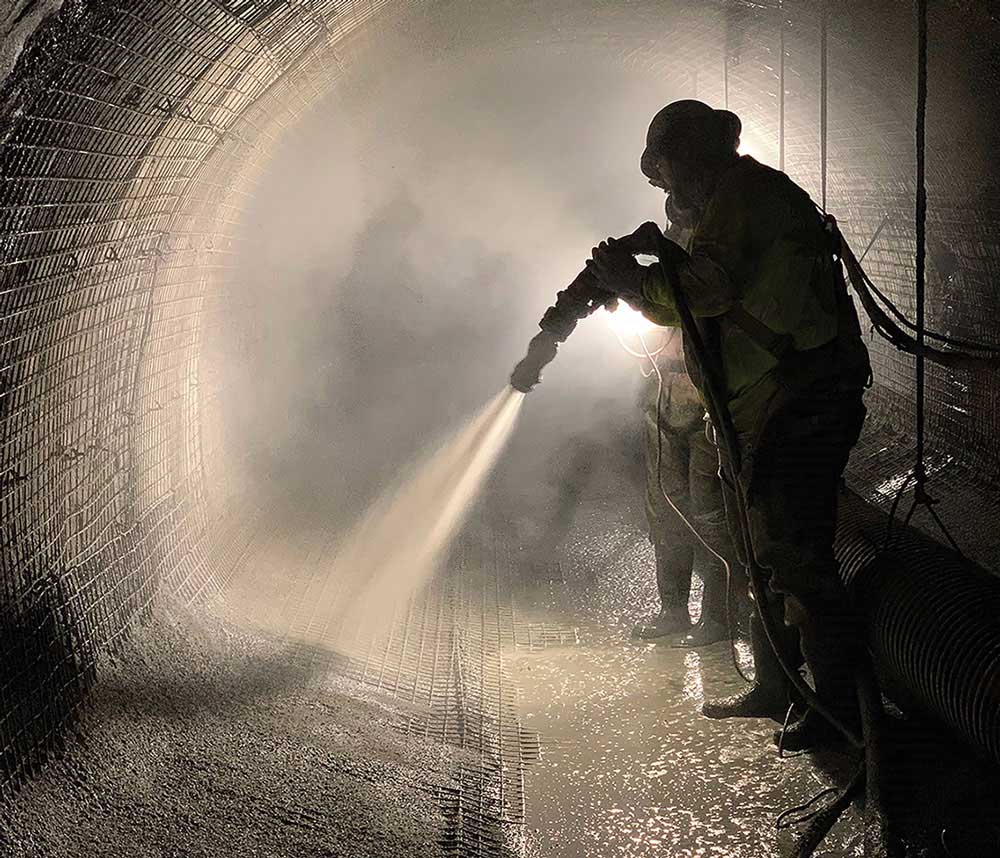 “I learned the industry by fire, you could say,” Solimine relates. “Got involved the day after I graduated on a project in Trenton, New Jersey. It was a CIPP job that turned into a tunneling project with a multitude of challenges.”

Solimine says he’s grateful for starting at the bottom rung of the ladder as it offered him the challenge and opportunity to learn all aspects of Spiniello Companies, which aids him now as president of the company.

“Because we are so diversified, I really jumped around quite a bit, moving from project to project so I could better understand [the business],” Solimine says. “I learned from the ground up and continue to learn to this day. I learned project management, estimating, which allowed me to understand cost, time management, and the like. Great experience.”

He also credits the 350 to 400 employees under his auspices for the company’s continued success, saying it allowed him to keep Spiniello Companies at the top of its game and continuing to grow while he was learning the ins and outs of running a construction business. “It makes my life easy at times because the people who come to work here love what they do and take pride in what they do,” he says.

Although still headquartered in Livingston New Jersey, Spiniello Companies is spread out a bit more than in the early days. Its three primary locations are New Jersey, California — known as Spiniello Infrastructure West — and Maryland, with Solimine noting that the latter is one of the company’s core locations and is responsible for approximately 30 percent of its annual revenue. Spiniello has also done international work in London, the Caribbean, South America, Europe and Canada.

In addition to its formidable lineup of trenchless services, Spiniello added bypass pumping to the mix in 2008 to give them that added edge over competing contractors. Bypass pumping was added for a few reasons, Solimine explains. “I saw that adding bypass pumping was an opportunity,” he says. “In some cases, with the type of work we do, a bypass is required. We thought [by adding bypass pumping] it was a way for us to not only control more of the projects we worked on but to also be a little more competitive. So, most of the large bypasses, anywhere from 50 million gallons a day to 200 million gallons a day, we do in-house.”

What has been the key to Spiniello’s successful run? Solimine heaps most of the credit to the company’s longevity and success to its workforce, whom he describes as the best in the business. “Stemming from our experience, safety record and commitment to our customers, it’s safe to say Spiniello has an extremely dedicated workforce,” he says. “Everybody is committed to providing transparent and innovative solutions to our customers. We pride ourselves on customer service and we have an outstanding safety record.”

Solimine further shares that the tenure of workers is also a critical factor in the firm’s continued success, noting that many employees have been with Spiniello for 20 to 30 years. “Thirty to 40 percent of our workforce has been with us north of 15 years,” he says. “With a company our size, we try to run our business like a family business.”

He also emphasizes the importance of cross training his workers and how that makes Spiniello stronger as a company. “We really try to grow from within,” Solimine says. “Knowledge is power in this industry and the stronger and the more experience our employees have, the better we are as a company.”

What also makes Spiniello such a strong company is that the trenchless market just continues to grow. The urgent need for rehabilitation of aging water and sewer lines makes experienced contractors, such as Spiniello, that much more important to the underground utility landscape. “There is a significant need in the United States and around the world for renewable solutions for an aging infrastructure, specifically our underground assets,” Solimine says. “One of the challenges over the years has been the ‘out of sight, out mind’ mentality and approach. A lot of the taxpayers’ money has gone to things that are tangible and things that are visible. Unfortunately, water and sewer and other areas underground have been neglected.”

This dire need for rehabilitation is attracting more contractors into the trenchless market but are they qualified and experienced enough to handle what lies ahead for our underground infrastructure? “There are a lot more people getting into the trenchless arena and that’s good and bad. Some people think that you can just buy some equipment and have a product that is easy to install. Sometimes they lack the experience and the quality. We pride ourselves on the quality of the work we provide. The market has gotten more competitive, which makes it even more of a reason for us to continue to get better as an organization,” Solimine says.

What also makes Spiniello unique is that in this age of contracting companies getting scooped up by larger, corporate entities or private equity companies, this contractor remains successful on its own.

“We’re not a company that is for sale,” Solimine says, noting that the best years for the company are still in front of it. “We strive for continuous improvement.”

“Organic growth for us is important,” Solimine says. “We have a strong appetite for growth but our approach is strategic and methodical. When we see opportunities, we evaluate them and the risk. This approach has been our driving force in adapting to market changes, and it’s worked for 98 years.”