In Norway, a recent increase in the use of Small Hydroelectric Power Project (SHEPPs) has shepherded in the new forms of technology. The compact projects, which typically have 10 MW generating capacity or less, are usually constructed in hard rock and often require an underground waterway at steep angles up to 45 degrees.

The unique requirements of these projects have meant that in the past the tunnels were built using combinations of drill and blast and raise boring. But more complex tunnel geometries and ground conditions have necessitated novel designs, including Small Boring Units (SBUs) and small TBMs capable of boring hard rock at steep grades.

For contractor Hardanger Maskin AS, the choice for a small tunneling solution over other methods was simple. The company owner, Tore Eiken, had first experienced Robbins TBMs when his father worked on “Madam Felle”, the first TBM to be used in Norway from 1984 to 1986 at the 7 km long Fløyfjell tunnel. “It was my first meeting with a TBM,” said Eiken in a recent article published in the Norwegian magazine Anlegg & Transport.

While the “Madam Felle” machine was much larger than what Eiken would need years later, he still turned to Robbins when an opportunity arose to bore a 640-m long drive in hard rock at 2-m diameter. The project, known as Holen Hydro, was located near Sogn og Fjordane and was required to increase power to the mainline of a local utility, Småkraft.

Hardanger Maskin sought a tunneling solution as it offered significant advantages over other methods such as horizontal directional drilling. Due to the relative lower surface roughness of the tunnel wall in a mechanically excavated tunnel, the water flows better, and the needed cross section can be reduced by between 40 and 60 percent.  Less rock support is required in general, and because of the better tunnel quality there are lower lifecycle costs to maintain the tunnel. Mechanized tunneling also disturbs the environment far less than drill and blast operations.  The TBM and muck haulage are typically run on 100 percent electric from the grid, which in Norway consists of 94 percent renewable energy. In addition, there is less excavated material to deposit during mechanized tunneling, and use of a TBM or SBU also eliminates the risk of nitrous run off and plastic waste from D&B deposits.

RELATED: Navigating Under New York With a Remote Controlled SBU 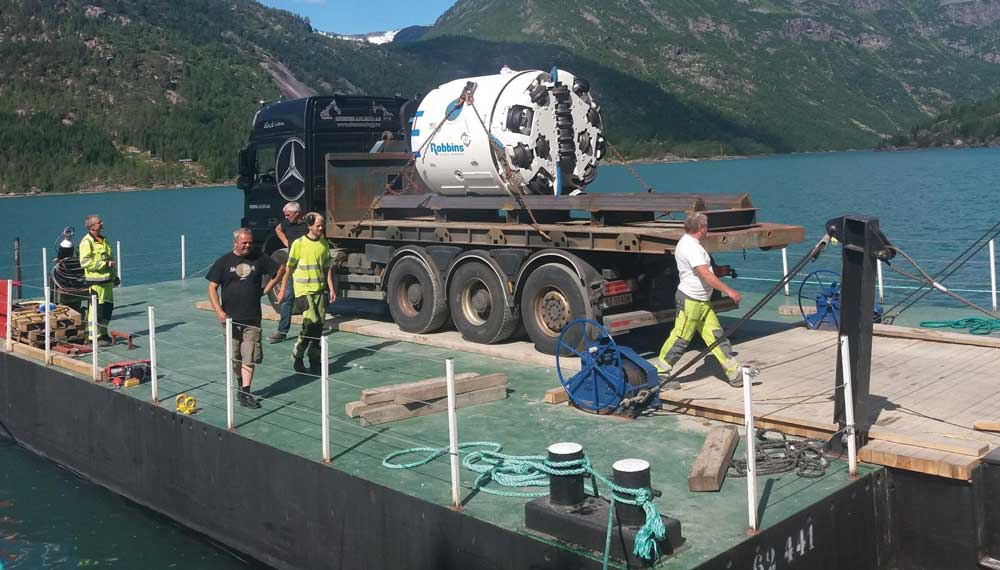 The 2-m diameter Double Shield Rockhead (SBU-RHDS) designed by Robbins was 20-m long and weighed 53 metric tons. As the machine was to be used to bore a series of tunnels ranging from 640 m during the first drive to 2,000 m, ease of use and removal was paramount. Due to local terrain, the tunnels would have a small launch area of 4 m x 10 m, and the tunnel slope on the first, 640 m long drive would range from a slight upward tilt to 45 degrees at the breakthrough.

The Double Shield Rockhead provided for the tunnel includes 14-in. diameter cutters and is capable of self-propelled excavation using a gripper system.  Torque is achieved through an internal drive motor.

The novel 2-m (78-in.) diameter machine is equipped with unique features that allow it to drill at a steep incline, including electric power, modified oil and lubrication systems and a fail-safe safety gripper (secondary gripper), as well as a water-based spoil removal system, developed by the contractor.

The Rockhead launched in July 2018 with Robbins Field Service onsite assisting Hardanger Maskin AS with assembly, setup, and launch of the equipment.  As tunneling began and the slope was near horizontal, the contractor opted for a miniature loader for muck removal. As the tunnel got steeper, the secondary safety gripper system was put to the test.  The safety grippers worked well, as they were designed with interlocks to ensure primary grippers were never released while the safety grippers were engaged, and with an additional safety mechanism allowing for mechanical locking in the event that hydraulic pressure was lost.

Eiken praised aspects of the shielded machine design in Anlegg & Transport: “We have steel shields for security. We have met with little water so far, but Double Shield Machines with their closed design meet the prerequisites for performing safe and secure work. They are safer than open machines.”

RELATED: Victory in Vermont: Three Hard Rock Crossings Completed On Line, On Grade and On Time

While the excavation rate of the machine was good, the novel design experienced some reliability issues during tunneling. Robbins Field Service were able to fix problems as they came up.  Despite the challenges, the machine completed a daring hole-through at a steep 45-degree incline on Jan. 1, 2019. It has since been relaunched to bore a second 1,750-m long tunnel, where the design continues to be fine-tuned as the crew advances the machine slowly to mitigate risk. The machine, at Skorgeelva Power Plant in Møre og Romsdal, is more than 1,000 m into its tunnel as of early 2020. 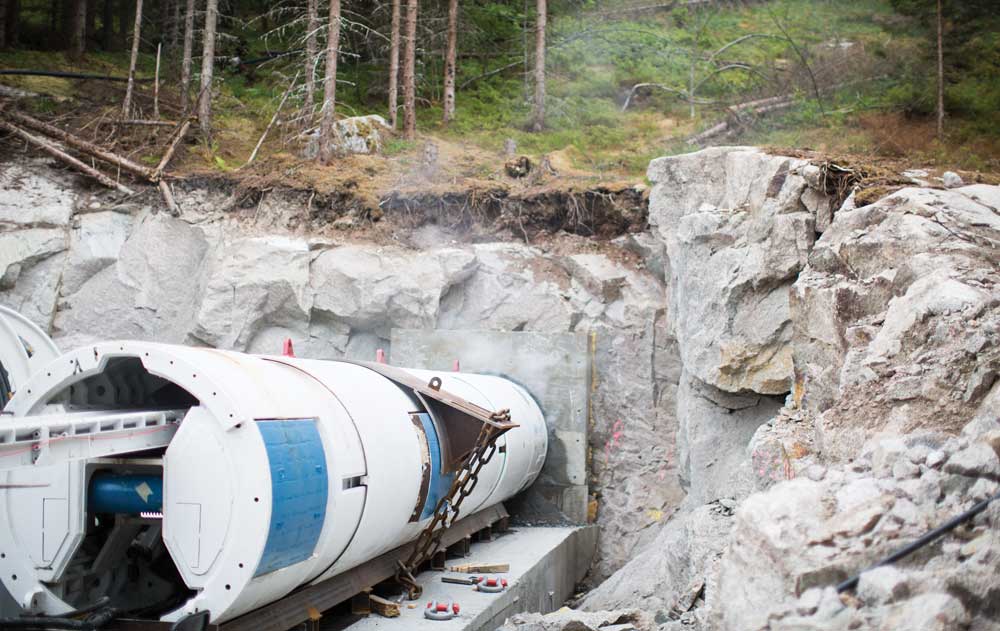 Beyond Norway: Applications in North America

Small diameter hydro tunneling looks poised to continue making a big impact in Norway. A third tunnel, known as the Tokagjelet SHEPP, began excavation in December 2019. The 2.6-m diameter Robbins Double Shield TBM, another project for contractor Hardanger Maskin AS, was designed with a safety gripper. The alignment of the 2.1-km long tunnel will increase gradually from near-horizontal to a 30-degree incline.

Given the increasing interest in small hydro tunnels, and the fine-tuning of effective designs for rock tunnels at steep inclines, there is a huge potential for such projects throughout Europe and North America. As infrastructure spending on water tunnels and hydro projects increases, so too will use of mechanized boring technology that can effectively excavate at steep grades in hard rock.

Desiree Hunt is public relations manager at The Robbins Co.