BT Construction is a company that fits the description of trenchless technology: innovative, creative and effective.

The company was borne out of an open-cut market but its owners quickly realized the risk, reward and potential of the trenchless technology market and decided to go for it. Today, the Henderson, Colo.-based contractor is one of the leading trenchless firms in the United States, balancing its open-cut work by specializing primarily in microtunneling, pipe jacking and tunneling.

Started from modest means with just a few employees, today BT Construction sits on top of 7 ½ acres with its office, 125-member workforce and an array of trenchless equipment including various sizes of auger boring machines, microtunneling machines, TBMs and excavators. Not content with doing the so-called routine projects, BT Construction goes after what it considers to be the most challenging jobs out there, finding solutions where others cannot.

“We don’t care to be the biggest company. We just want to be the best,” says BT Construction president principal owner Buck Bergstrom, who began his career working for his father, Bob, a founding partner of the business. “We are not in the same category as some of the larger construction firms out there. We can bring you that personal touch and some horsepower to match it.” Getting Started
BT Construction was the idea of Bob Bergstrom and John Turner who partnered in 1980 to create a small contracting firm that handled water and sewer installations. The business originated from Bergstrom’s home in Loveland, Colo., and employed just five people: three field personnel (which included his son Buck), Bergstrom and Turner.

“It was kind of lonesome back then,” Buck Bergstrom recalls, chuckling. “But with that humble start, things really took off and it wasn’t long before we had about 30 employees by the mid-1980s. “We were doing concrete structures and earth work, too.”

Bob Bergstrom had experience with tunneling, dating back to the 1950s and in 1987, BT Construction did its first tunneling project — a 350-ft drive of 72-in. concrete pipe in Aurora, Colo. This project marks the company’s first foray into the burgeoning world of trenchless. By the 1990s, the company had purchased a few large diameter auger boring machines.

“I played college basketball at Utah State,” says Buck, who’s simultaneously towering and low key at 6 ft, 10 in. tall. “I had the opportunity to play basketball in Australia but my Dad started this venture in 1979. I have always been close with him and this was a dream of his. I really liked the industry and I had a really good run [in basketball]. But sports were never really my passion. So that was the end of my athletic career and I went to work with my father.”

By 1996, Buck was ready to take the reins of the company, and he and his wife, Marilee, bought out his father. He and Turner continued with the company until 2001 when they decided to part ways, with each desiring a different direction for the company.

“It was a strategic change for both of us,” Buck Bergstrom says. “We wanted to look at different opportunities. We had a passion for the large diameter auger machines and tunneling. Our goal was to become a trenchless contractor and that was a good option for us.”

Buck notes that at the time of the split, he had purchased two 60-in. auger machines and had several small auger machines between 36 in. and 42 in. in diameter. Over the years, more and more trenchless applications have become integrated into its everyday work, making BT Construction a leading trenchless contractor. While open-cut remains a key component of the company today, its trenchless applications have proven to be just as critical to the company’s success.

“The amount of trenchless work vs. open-cut work within the company is about 50-50, but that varies year to year, depending on the projects we take on. [Trenchless] is absolutely a large portion of our work,” says Marilee Bergstrom, who is marking her 25th year with the company. She is the company’s executive vice president and is involved in estimating, project management and accounting. 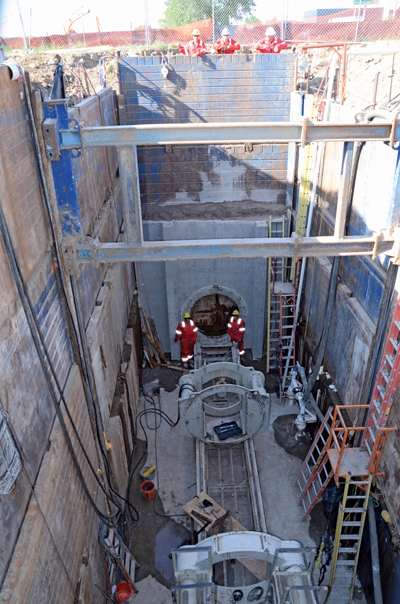 “We were kind of on the cusp of really breaking out when we started getting into the larger diameter tunnels and microtunnels. We wanted to separate ourselves in the market by becoming a full-service general contractor, as well as a partner for other general contractors in providing full service to them,” explains Brenden Tippets, who is a part-owner of the company, as well as senior project manager responsible for the BTrenchless Division.

Today, BTrenchless encompasses a vast array of trenchless services for large diameters up to 129 in.: microtunneling, pipe jacking, auger boring, hammer, sliplining, tunneling, pipe bursting, potholing and hand tunneling. “Pretty much any trenchless method out there, we do,” Tippets says, noting the company used to do horizontal directional drilling but now teams with local contractors with such work.

Those trenchless services are put to work in challenging job applications — multi-layered projects that allow the BT Construction team to use all their resources, know-how and expertise in the getting them done. The ultimate professional adrenalin rush.

“Part of our philosophy is that we do go after the more difficult projects,” says Harper Daniell, part-owner, vice president and head of project management with BT Construction. “As a group, we enjoy that challenge. We don’t enjoy doing the same things time after time after time… We’re not the come in and do one bore contractor. We like to do difficult jobs with many bores and many challenges on it.”

Based in Colorado, BT Construction primarily handles projects in the Rocky Mountain Region — which includes Colorado, Idaho, Montana, Nevada, Utah and Wyoming — which is an area that has grown more competitive in recent years due in part to the economic downturn over the past few years. “More competition has come into our region from other parts of the country because of the lack of work across the nation,” Marilee Bergstrom says. “We have seen our competition double on any given project and the prequalification process has become more stringent. The East and West Coasts have had more trenchless projects in the five to 10 years than the Rocky Mountain Region ever had. When the [economic] downturn came, those contractors had to find other regions to work.”

Tippets says the Rocky Mountain Region is an emerging market for trenchless, with microtunneling and pipe jacking being spec’d more often than in the past. “They are being spec’d more because of the tougher ground conditions that a lot of projects are going into this region, as well as the engineering community understanding what technologies are available,” he says. “The Rocky Mountain Region has such a large strata of soil conditions that you are going to have different and varying methods being spec’d because of that. In previous years, they haven’t had to build in some of these tougher ground conditions but now it’s starting to get built out a lot more.”

Competition for these larger, complex jobs is always fierce and BT Construction typically faces a familiar pool of contractors for most large diameter jobs. Add to that a down economy and it makes for an even a tougher bidding climate. But BT Construction finds these conditions have actually made it a better contractor in the way a project is approached, designed and executed, thus setting it apart from their competition.

“[The economy] has made us work smarter and more efficient, as well as work outside our normal market area. We are looking at new technologies that complement our existing services,” Tippets says. “There are new competitors coming in our region of late, which makes it an extremely volatile and difficult market to be in right now.”

The Magic
The BT Construction team credits its long-sustained success to its dedicated 125-member workforce, describing them as “the magic” of the company. The company brochure says “State-of-the-art equipment is useless without state-of-the-art employees” — an anthem company officials says resonates throughout the company in everything they do.

“I really believe that,” Marilee Bergstrom says. “There is some great technology out there but if you don’t have the right people, all working together as a team, it does you no good.”

“We have an incredible group of intelligent, motivated people who care about their jobs and the work they do,” says Tippets. “We can be successful doing anything we wanted with this group. It’s very much the culture here and we are all going in the same direction.”

A way that BT Construction rewards employees is through its ownership program in which key employees are offered the opportunity to purchase stock in the company — stock owned by Buck and Marilee Bergstrom. Established in 2001, today the company has 15 owners and as the market continues to gain strength, more will be soon added.

“This has made a huge difference in our business,” says Marilee Bergstrom. “It really infuses an entrepreneurial spirit in our organization.”

The success of the ownership program has resulted in sustained employee loyalty, with nearly 30 percent of the BT Construction workforce having more than 10 years with the company. The Bergstroms operate their company as a team with all decisions affecting BT Construction being discussed by the ownership group — from equipment purchases to projects.

The Bergstroms treat their company as their family and are proud to offer ownership stock to their trusted employees who have earned the opportunity to share in the success of BT Construction. Three of the four original owners are still with the company. “This is a great opportunity for them to be owners,” Buck Bergstrom says. “We are very much a family-oriented company.”

The Future
Buck and Marilee Bergstrom are proud of how the company has continued to excel after they took charge and are pleased that his father is able to see the success. At 79, Bob Bergstrom still owns stock in the company and can be seen checking out jobsites with his son. “He is very proud of what we have done,” Buck Bergstrom says. “It’s a legacy for him and what he started and stood for. I am extremely proud of him, that he was able to take a step back, which was really difficult for him, and let Mari[lee] and me take the reins.”

The short-term and long-term future for BT Construction is mapped out, with strategic and smart growth planned. The company is in a good place. Company owners want to continue to lead as experts in the field and set the bar for project innovation and success. Today, BT Construction actively participates in several industry organizations that promote and educate about the trenchless market, such as ASCE and its work to update microtunneling guidelines/specifications.