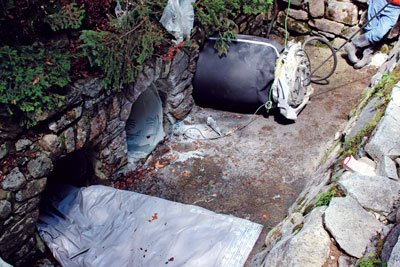 Published by Jim Rush April 24, 2015 View Profile
Constructed between 1931 and 1935, the Whiteface Mountain Veterans Memorial Highway in Wilmington, N.Y., is popular among tourists and outdoor enthusiasts trekking to the top of the 4,865-ft peak. The toll road winds its way eight miles to the summit, offering sweeping views of the Adirondacks and Lake Placid in northern New York.
The road is unique in that it is actually maintained by the New York State Department of Environmental Conservation — not the Department of Transportation (DOT). Additionally, it is listed on the National Register of Historic Places and located within a forest preserve. More than 70,000 people make the trip up the roadway to the summit in the busy season, which runs from about mid-May to mid-October. 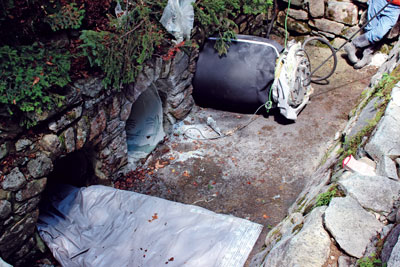 Since the time it was dedicated in 1935 (by President Franklin Roosevelt), the road has fallen into a state of disrepair. In 2014, a contract was awarded that involved reconstruction and rehabilitation of the driving surface to make for a smoother ride. The project will also involve the restoration of many of the highway’s historic elements put into place under the road’s original design, such as restoring the 10-ft wide travel lanes and 2-ft paved shoulders, as well as fixing rock walls and re-setting the quarry stone barrier stones along the road.

Another element of the project involved the renewal of culverts that traversed under the roadway. Renewing pipes of any kind is never simple, but this project involved steep slopes and narrow work zones and required keeping traffic flowing unimpeded during the height of the tourist season.

Rifenburg Construction Inc. of Albany, N.Y., was awarded the roadway restoration contract for $11.2 million. Precision Industrial Maintenance Inc. (PIM) of Schenectady, N.Y., was the trenchless subcontractor hired to rehabilitate the culverts. There are 70 culverts along the eight-mile route, 52 of which required rehabilitation.
Trenchless rehabilitation was a natural fit for the culvert repair project, said Mike App, project manager for PIM. First of all, he said, the original builders of the road constructed rock walls from the stone as they cut their way to the top, at times running the culverts through these dry-stacked walls. “There was no way that we would have been able to move those walls,” App said. “It would have been prohibitively expensive, and they are protected historic structures.”

Geoff Wood, project manager for the New York State DOT, agreed that trenchless was the only option. “It is not easy to work off the pavement within the historic zone, which is also in a protected environmental area. There was also the expectation that we keep the roadway open at all times, which led us to the trenchless option.”

The DOT had experience with cured-in-place pipe (CIPP) projects in the past, and approved it for use in this project. What was unique in this case was the contractor elected to use the ultraviolet (UV) curing method — a first for New York DOT.

“Our materials group was interested in seeing how the UV would perform,” Wood said. “In addition, we found it helpful in dealing with the environmental groups that this lining method did not involve any hot water discharge or steam discharge.”

The use of CIPP in the United States is well accepted and proven. Traditionally, contractors have used hot water or steam to cure the liner, but UV curing is gaining acceptance in the marketplace. It was initially developed in Europe and has a substantial marketshare there.

Some of the advantages of UV-cured pipe include longer shelf life of liner after impregnation, which allows off-site impregnation that results in a reduced jobsite footprint. The UV method does not involve hot water or steam to cure, which again helps minimize the jobsite footprint and eliminates the need to transport the materials to the remote mountainside location. 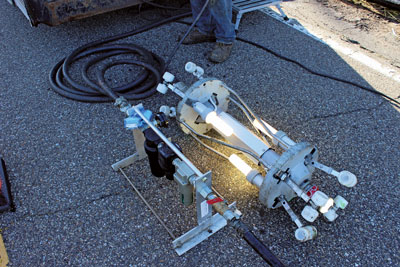 What was unique to this project was that the contractor elected to use the UV curing method — a first for the New York Department of Transportation.

PIM specializes in the UV-cure method and it was part of the bid package submitted by Rifenburg. The UV method also worked well in the larger diameters (ranging from 21 to 36 in. in diameter) of the storm culverts along Whiteface Mountain.

PIM uses glass-fiber reinforced UV-cure liners from SAERTEX multiCom LP, which are manufactured at the company’s ISO 9001-certified factory in Huntersville, N.C. UV liners have a thinner wall than conventional liners, yet are four to five times as strong.

The process involves winching the liner into the host pipe and inflating it into position with air. At this point the UV light train, which includes a camera, is inserted into the pipe and inspected before the UV curing process begins. Assuming there are no issues or anomalies with the liner, the UV light train is pulled back through the pipe at a designated speed calculated for the diameter and liner thickness, curing the liner along the way.

According to SAERTEX vice president Mark Hallett, another advantage of UV systems is their success rate. “Given all the safeguards built into the system, it is a very low-risk technology. The liners are factory-built and impregnated, the liner is inspected before curing, and a computerized control station monitors all aspects of the curing.”

The culverts along Whiteface Mountain were in various states of disrepair. Dislocated joints and voids were common problems — and each culvert presented unique challenges. The steep slope of the pipe (average pitch of about 20 percent) presented challenges for crews trying to string the liner into the pipe.

One of the biggest issues, App said, was finding level ground on which to work. “We never stood on a flat surface for the project — everything was pitched,” he said. “We can to compensate for the pitch in everything that we did.”
The majority of the culverts were 21- and 24-in. diameter, with some 30- and 36-in. runs. The typical lengths of installations were between 60 to 120 ft. PIM began its relining work in June 2014 and was finished in August, working five days per week.

“This was a total team effort considering each installation was different,” App said. “We were able to put a plan together for each one and get them done, all while maintaining the flow of traffic. And, we were able to get the job done on time and within budget.

With the culvert lining complete and wrap-up work for the roadway to be completed this spring, tourists can continue to enjoy the scenic and historic highway now into the foreseeable future.