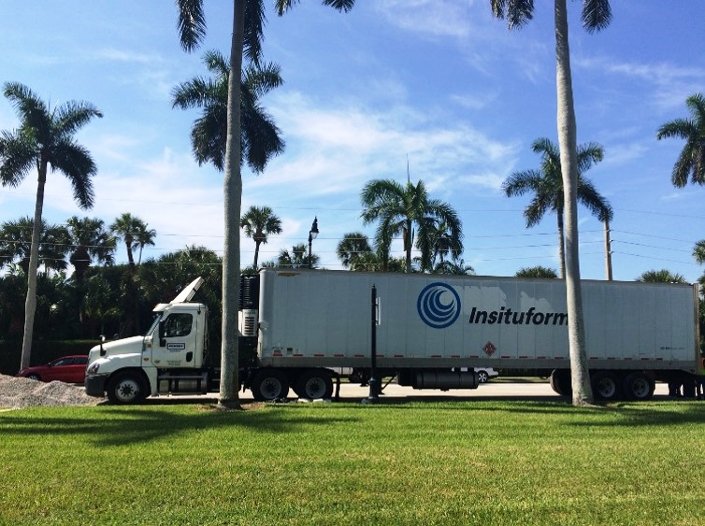 Mock Roos & Associates worked with Insituform Technologies LLC after the Town had experienced some previous sanitary sewer overflows to design and rehabilitate the force main in order to prevent future issues. As the project was located adjacent to a natural waterway, Insituform worked closely with the town to make sure necessary environmental considerations were taken during installation.

Success of the project was extremely important due to environmental issues and the jobsite’s proximity to multi-million dollar beachfront property. In fact, this high-profile neighborhood includes the homes of radio personality Howard Stern, singer Jimmy Buffet and a current presidential candidate.

Additionally, the easement for the jobsite consisted mainly of an 8-ft wide bike path located right between the manicured yards of the rich and famous and a seawall to the Intracoastal Waterway. The small jobsite footprint made for extremely tight access.

The engineer on the project had to find a solution to address not only the tiny jobsite footprint but also the pressure requirements of a 12-in. diameter force main. This led Mock Roos & Associates to partner with Insituform Technologies. Together, they designed the project using Insituform’s InsituMain system, a fiber-reinforced structural cured-in-place pipe (CIPP) that would meet the structural and pressure requirements of the pipe while causing the least amount of disruption to the surrounding community.

The InsituMain system is comprised of an epoxy composite layer reinforced with glass fiber material. With its AWWA Class IV rating and engineered design that stands up to both internal pressure and external loading, the InsituMain system provides a fully structural solution for pressurized pipelines. As part of Aegion’s Infrastructure Solutions platform, Insituform was able to further engineer the project to not only rehabilitate the existing pipeline, but also ensure an extended lifespan.

There were numerous project challenges throughout the Town of Palm Beach force main project, but the main challenge by far was accessibility. With a total easement of roughly 10 to 12 ft, tight access resulted in custom equipment packages being built to fit the jobsite footprint. In fact, the project led to the innovation of specialized equipment packages, including trailer-mounted boilers and modified torpedo launchers for the installation.

These pieces were constructed specifically for this job, had not been previously used and were then disassembled upon project completion. This specialized equipment allowed the contractor to not only fit the small jobsite footprint, but also to transport the equipment along the tight bike path where the equipment had to be confined. The boiler and torpedo launcher installation machine were able to be towed along the bike path using just a small tractor.

In order to access these pipelines, crews had to chisel through the concrete bike path. In order to keep disruption as low as possible, the size of the excavation pits was kept to an absolute minimum.

Since the jobsite was directly next to the seawall of the Intracoastal Waterway, another issue was the elevated water table. In fact, crews hit the water table after only digging approximately two feet down, requiring constant dewatering.

Scheduling, a challenge faced on many pipeline projects, was exacerbated by the water issue. In addition to the elevated water table, the tidal schedule made it possible to work at only certain times of the day. Additionally, inaccurate as-builts contributed to scheduling issues as project plans had to be changed to work around unforeseen utilities. Crews engaged in some night work in order to comply with the project’s strict 8-week timeline.

The inaccurate as-builts presented more surprises than simply utilities. One particular pipe connection had to be reworked in order to compensate for not only a 90-degree horizontal bend, but also a 90-degree vertical bend. This required the installation of additional couplings to tie the segments together.

Proximity to multi-million dollar homes also presented several challenges not encountered on typical projects. Crews had to be mindful and take special precautions around extremely expensive landscaping. Exhaust had to be monitored in order not to burn shrubs, bushes and other high-end sodding as any damaged landscape would need to be replaced.

As the project was located right next to a natural waterway, Insituform worked closely with the City to make sure all necessary environmental considerations were taken during installation. The project crews worked diligently to prevent sanitary sewer discharge. It was imperative that any dumping was avoided. As part of Aegion’s Infrastructure Solutions platform, Insituform was able to further engineer the project to not only rehabilitate the existing pipeline, but also ensure an extended lifespan.

For instance on this project, 57 Corrpro magnesium anodes, offered by Aegion’s Corrosion Protection platform, were added to specialized Hymax fittings in order to prevent degradation and corrosion on the fittings connecting each pipe segment.

The success of marrying products on this project has led to utilizing other Aegion product offerings as solutions on pressure pipeline projects as well. These include the Tyfo Fibrwrap fiber-reinforced polymer system, Fusible PVC and the Tite Liner thermoplastic lining system.

The project was completed in seven shots over an eight-week period, ranging in length from almost 400 to more than 900 lf. Once the project was finished, the pipe was successfully pressure tested according to ASTM F1216-09. Since the successful completion of the project, Insituform has completed additional pressure pipeline work for the Town of Palm Beach, including roughly 7,500 lf of 16-in. and 20-in. pre-stressed concrete cylinder pipe using the same fiber-reinforced product. The company is also currently working in nearby West Palm Beach doing large-diameter pressure pipe rehabilitation along with cathodic protection.