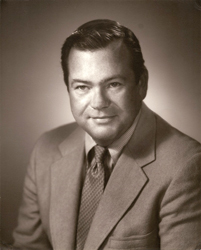 He was born on May 24, 1942, in New Orleans. Golden’s father worked for Standard Oil, which moved the family to Houston. Golden attended the University of Wyoming on a football scholarship and he later attended art school in Milan, Italy, where he learned to enjoy opera, ballet and horseracing. He was a graduate of the Oklahoma State University, B.S. Economics, 1966; University of Tulsa, J.D. Law, 1968 (he graduated top of his class) and was admitted to the Oklahoma Bar in 1968.

In 1967 he started as a law clerk with the law firm of Hall, Abercrombie, Estill, later Hall, Estill, Hardwick, Gable, Golden & Nelson P.C. He was a lawyer, then partner, with the firm from 1968-2004. He represented the Williams Co. as an international pipeline negotiator and spent his time on the Trans Alaska Pipeline System (Alyeska), as well as on pipeline projects in South America and the Middle East. He later transitioned to real estate development projects. Golden retired from the law firm in 2004. In 2001, he returned to his “pipeline industry” roots by joining his wife Beverly’s family business, Midwesco Industries, Inc. There he served as president with his partner, James A. Bost.

Golden was admitted in 1972 to the United States Supreme Court, United States Court of Appeals for the 10th Circuit and the U.S. District Court of the State of Oklahoma, Northern District. He was a member of Federal Judicial Nominating Commission, 1981-1993. He served on the board of directors of the Oklahoma Arts Institute, Performing Arts Center Trust, American Red Cross, Downtown Tulsa Unlimited, Tulsa Boys’ Home, Eateries, Inc., Rooney Management Co. and Hall Estill, and Boston Avenue United Methodist Church.

He is survived by his wife, Beverly B. Golden and two daughters, three grandchildren, as well as a brother and sister. He was preceded in death by a daughter.