The City of Denver has been growing at a sustained rate over the last several years, and along with that has come … well, growing pains. One issue has been keeping up with the storm drainage in the highly developed downtown core.

To prevent flooding and improve drainage for five-year storms, as well as improve overall water quality in the South Platte River, the City and County of Denver recently initiated the 33rd Street Outfall, which services the neighborhoods of Five Points, Whittier and City Park West within the River North Arts District (RiNo). The overall project was expected to reach final completion by the end of 2019.

The outfall was broken into four phases, with Phase 2 completed from fall 2017 through spring 2018 by local contractor BTrenchless, a division of BT Construction. The project included four tunneled sections to convey storm water and snowmelt to a new outfall on the South Platte River, thereby reducing the risk of damage to residential and commercial properties. BTrenchless used a suite of tunneling/trenchless techniques to build the pipeline. The project created several challenges for the construction team, including working in an urban landscape, crossing under railroad and commuter train tracks, and a tight construction window to avoid disruption to one of the area’s largest tenants – the Colorado Rockies baseball team.

The backbone of 33rd Street Outfall Phase 2 included the installation of 720 lf of 120-in. diameter pipe. The first section was 252-lf crossing underneath five sets of Union Pacific railroad tracks and two sets of Regional Transportation District (RTD) commuter rail tracks before reaching the parking lot of Coors Field, the Rockies’ home ballpark.

Although soils for the crossing were conducive to microtunneling, the shallow depth (less than 1 pipe diameter) led BTrenchless to use hand tunneling with a custom-built excavator shield with sand shelves to control the face. Additionally, the tunnel was extended across the Coors Field parking lot to reduce asphalt repair costs. To help keep the tunnel on line and grade, crews first installed a pair of twin steel guide rails using the guided auger boring method. The guide rails were installed using a 4-in. Akkerman GBM, followed by the installation of 12-in. steel casing filled with grout. Once installed and filled, the guide rails eliminated the need for steering the shield during construction.

With the guide rails in place, crews used a Herrenknecht push frame with a custom-built yoke to accommodate the 10-ft diameter Hobas pipe.

The second tunnel was underneath the 33rd and Blake Street intersection and was originally designed as 60 lf of 15-ft wide by 6-ft tall jacked reinforced concrete box. This section was redesigned to a pair of twin 96-in. hand tunnels due to constructability concerns and close proximity to existing utilities. The pipe material was changed to steel casing that was coated on the interior after installation.

There was an additional lateral installed along Blake Street involving a 555-lf run of 54-in. pipe that was to be bored and jacked. The Blake Street lateral was redesigned as a microtunnel and the pipe was reduced to 51-in. diameter Hobas pipe to accommodate an Akkerman SL51 in BTrenchless’ fleet. For slurry handling, BTrenchless used a Derrick recycler system with a triple sand shaker.

“Microtunneling was really needed in this area due to rapid urban development,” said John Beckos of BTrenchless. “We were constrained to one and a half lanes of roadway to work in and we had to keep vehicular and pedestrian traffic open at all times. Logistically it was very challenging.” 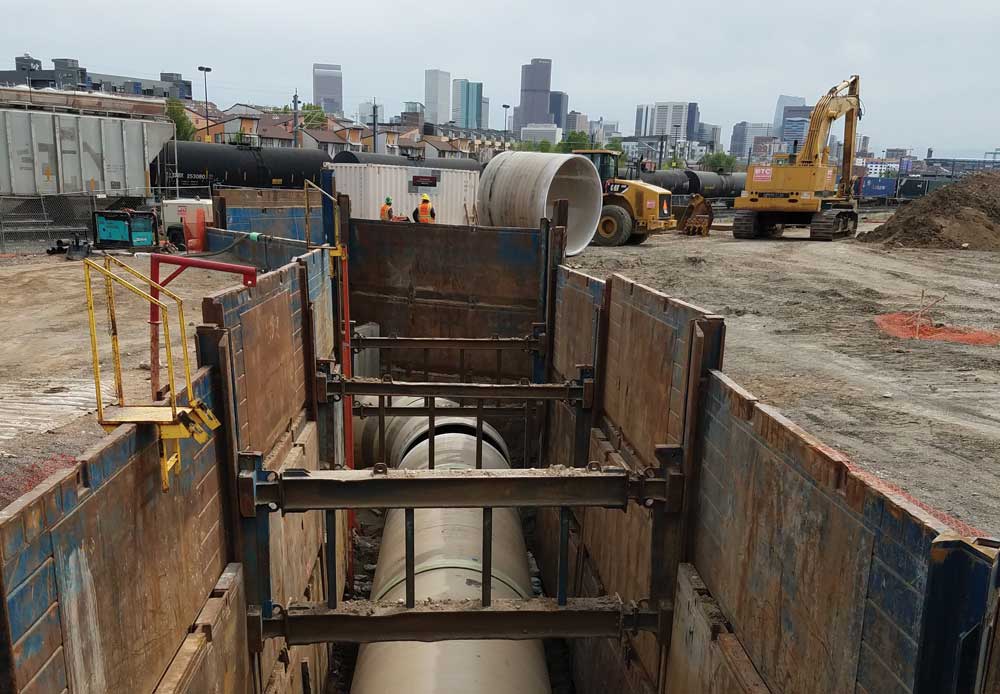 The completed project will help control flooding in the Denver neighborhoods of Five Points, Whittier and City Park West.

Following completion of the microtunnel, an inlet was installed via open-cut in the middle of the run to collect additional drainage.

All four tunnels were installed successfully, on line and grade, and had zero settlement issues.

The project had to be completed during the baseball offseason between October and April. This construction window was reduced by two months due to permitting delays by the railroads. These schedule delays were overcome by working 24-hour shifts at times during the project. In fact, BTrenchless were using four crews in order to meet the abbreviated three-month schedule window.

When fully complete, the 33rd Street Outfall will serve the neighborhoods of Five Points, Whittier, and City Park West, improving drainage during a 5-year storm event. The new storm system will carry storm runoff and snowmelt safely to the South Platte River, reducing the risk of damage to residential and commercial properties. It will also allow additional improvements to connecting systems upstream in areas to the east, which are also at increased risk of flooding.

The client, the City and Country of Denver, was pleased with the outcome of the project. “BTrenchless had some experience on this pipeline having had previously built the downstream phase. However, this particular phase had seven different railroad tracks run by two different railroads to tunnel under, a set of very challenging stakeholders to work with, and a set of tunnels in Blake Street that had to be built in a tight, urban corridor while keeping traffic and pedestrian traffic live,” said David Shaw, project manager for the City and County of Denver. “The entire project had to be done during the baseball offseason to accommodate one of the key stakeholders in the area, the Colorado Rockies.

“Despite these challenges, BTrenchless performed like the City and County of Denver has grown accustomed to seeing. They continually went above and beyond. Their goal was always to help solve problems, keep the project on schedule, on line and grade, and under budget.”