Hydraulic Hammer Finds its Place at the Tunneling Company

In the world of trenchless construction, there are only three guarantees; the specified pipe tends to be larger; the drive lengths tend to get longer, and the installation must be completed precisely.

Over the years, The Tunneling Company has continually invested in the latest technology and innovatively found ways to successfully complete the projects when other people say, “It can’t be done.”

Several years ago, The Tunneling Company recognized the potential of using hydraulically powered pipe ramming hammers horizontally. These hammers were traditionally used in a vertical manner on some of the world’s largest pile driving projects. Hydraulic hammers have been used in some horizontal applications over the last 10 to 15 years, but because of the complicated and challenging setup, the idea never really caught on; except for a few key projects. This changed with The Tunneling Company’s in-house innovation. 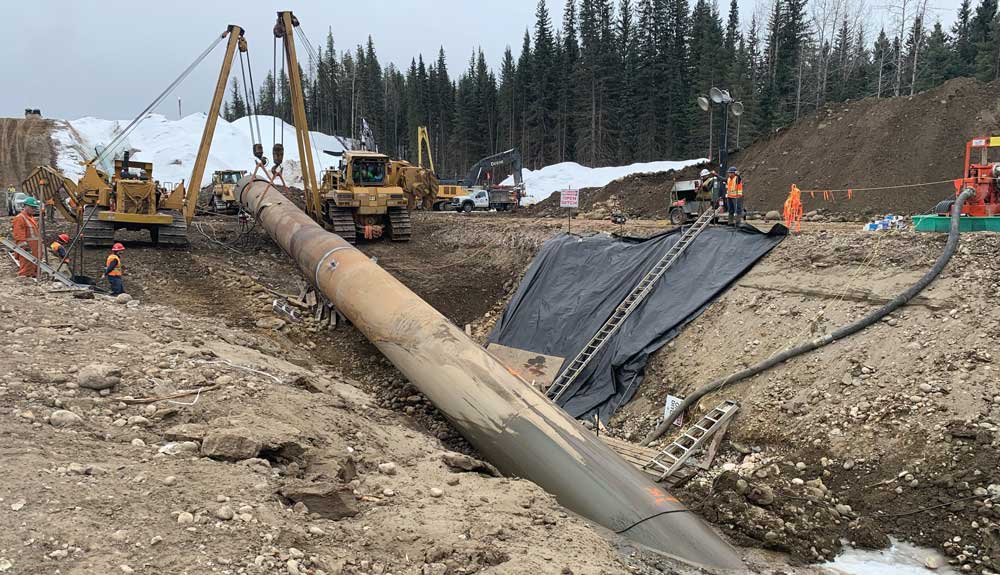 The idea was originally drafted up on a napkin – as with many great concepts – between Shawn Gaunt, Malcolm Bachand and Rich Bachand, all original partners in The Tunneling Company. The idea was to place the hydraulic hammer in the company’s patented hydraulic jacking frame. The idea quickly expanded into a digital mock-up and then fabricated in-house into a working model, which quickly proved itself in the field time after time. Some have called it a “game changer” when it comes to larger diameter steel pipe installation in a variety of soil types. At a minimum, it is another, “Tool in our toolbox,” says Gaunt, president, The Tunneling Company.

Most recently, The Tunneling Company recognized the opportunity to use this tool to install surface casings or conductor barrels for horizontal directional drilling (HDD). Surface casings are required when incompetent ground is present which could result in a break in circulation of the drilling fluid casing an inadvertent return. HDD designers are now designing challenging HDDs to incorporate surface casing to reduce the risk of inadvertent returns and to navigate through unconsolidated formations. The new challenge is once the casing has been successfully installed and the HDD completed, how does the contractor extract the casing to minimize the corrosion potential on the product pipe and minimize any additional environmental impact by leaving the casing in the ground?

Once again, the management team at The Tunneling Company needed an innovative way to successfully extract these large surface casings. Traditionally, a pneumatic (air) hammer was called on to extract these casings as it had been effective and efficient in the past based on smaller diameters and shorter drive lengths. However, an air hammer doesn’t produce nearly the drive energies of a hydraulic hammer so once a casing had been installed with the hydraulic hammer, extraction efforts with an air hammer were proving to be futile. 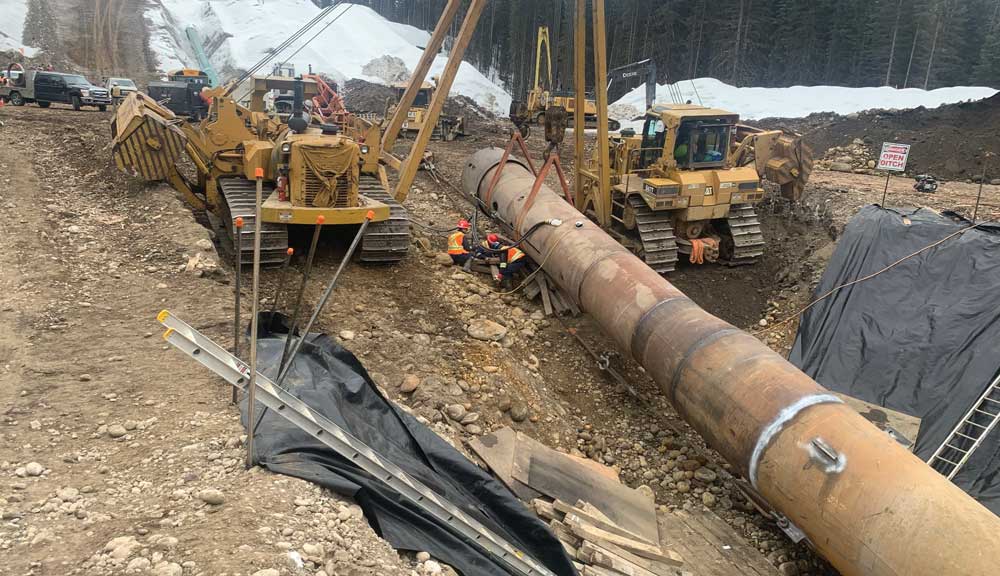 This time around, Elliott Brown, operations manager, was heavily involved in the brainstorming sessions as he brought with him extensive experience with the hydraulic hammer and the hands-on challenges with extraction efforts with an air hammer. The ideas and challenges generated from these discussions were drafted up into a digital design but were not put forward until the right project came along. 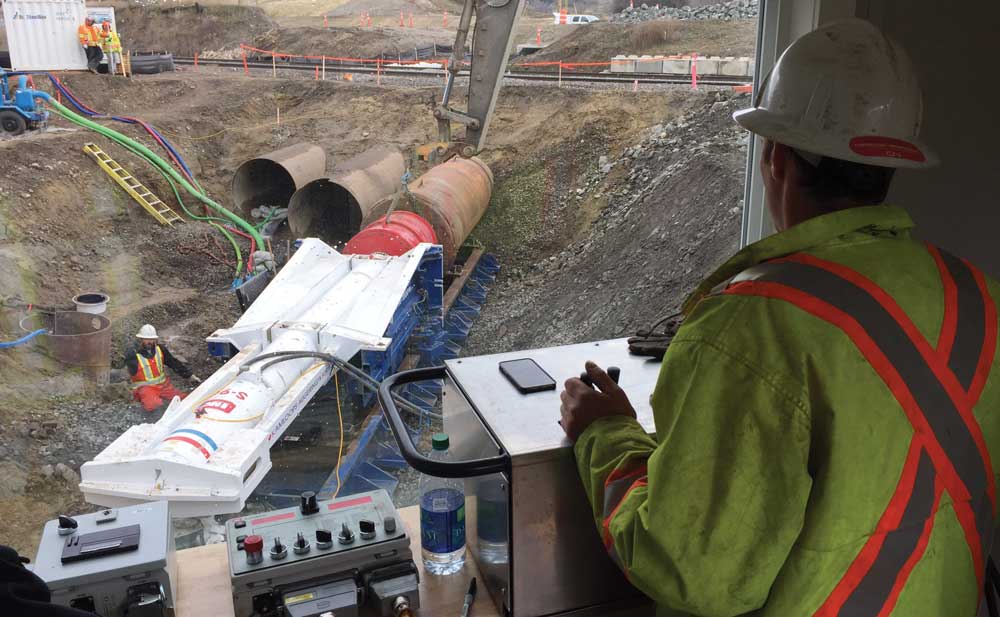 The Tunneling Company did not have to wait long for that right project as there have been several large diameter HDDs designed and installed over the last year that required extensive casing installations. A client reached out to see if the company had the means and methods to extract 68 m of 1.8 m casing. Extraction efforts had already been made with one of the world’s largest pneumatic hammers and it proved unsuccessful. Leaving the casing in the ground was not an option and time was of the essence. 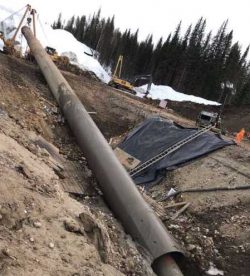 The Tunneling Company knew the hydraulic hammer had the energy required to remove this casing, the challenge was the extraction harness concept was not fully designed and had not yet been fabricated or proven. The design was revised and completed specifically for this casing diameter, the installed length and the anticipated energy required to extract this casing. The in-house fabrication team got to work running 24/7 for about a week until the working model was complete. Some tests and minor alterations were completed in the yard prior to mobilization to the job site where the real test would take place.

Upon arrival of the equipment, the crews had already completed any necessary preparation work on the casing and around the job site, which included digging down and cutting off 24 m of casing to help reduce some of the weight of the casing that needed to be safely managed. The equipment was unloaded, prepared for extraction, and welded into place on the casing. After two shifts to properly prep everything for extraction, the moment of truth.

The hammer was turned on and slowly warmed up to 35 kJ of the potential 90 kJ available on this hammer which got the pipe moving. No signs of failure were noted so the hammer was turned up to 42 kJ and then 48 kJ for the next couple of hours. At this energy output, the pipe started moving at a rate of 3 m per hour. After the initial two hours or extraction, the pipe started to really pick up and the crew saw extraction rates of 5 m per hour. By 4:30 p.m., extraction was successfully complete. The efforts of the crew and equipment exceed The Tunneling Company’s expectation and the client was pleased with the final outcome.

Nick Hyde is a project manager at The Tunneling Company.