Hard metal, commonly known as “hard band,” is known for preserving drill pipe — one of the most precious investments related to directional drilling. Mid-size and maxi-rig horizontal directional drillers frequently struggle with hard band because it causes down-time on the rig due to limited tong space.

Some contributing factors in this article will be explored, as well as ways to mitigate the issues of working around hard metal. Repair, by way of special processes such as building up and reapplying hard metal, will also be explained. One vocabulary disclosure, so as to eliminate any confusion, is the difference between the term drill steel and “drill pipe” and hard metal and “hard band.” We’ll try and minimize confusion by simply stating either hard metal or drill steel from here out. The problem most contractors face in dealing with the necessary evil of hard metal, is the limit it places on tong space. An average tong die is 5 in. long so the tool joint needs to provide at least 6 in. of drill steel to accommodate a hassle free make and break.

Hard metal, in its most basic form is applied on top of tool joints and next to tong areas. Hard metal is typically run in 1-in. increments or bands; three of them typically on top of box with 1 in. down the 18 degree and 2 in. occasionally on the pin.

Two other popular styles of hard metal include recessed/inlaid flush (picture of turned box side) and tying in with existing hard metal. Inlaying requires about 1/8 in. deep recessed area on the tool joint areas — usually on the box end. It’s applied on the box end usually because there’s more room and it doubles as a preservative for the pin tool joint when two joints are made up.

Hard metal is commonly rolled in spools and sold off the shelf with several compositions of tungsten or chrome-based wire material. It can be applied in smooth or coarse finish surfaces. Tungsten appears grey and commonly known as “fine particle tungsten,” which can rust while most chrome base hard metal is silver in color.

Several types of hard metal boast the term “casing friendly” with names such as Duraband, Tuff band and Armacore. Fine particle tungsten, once upon a time, was the most popular hard metal but began to relinquish its popularity due to how rough the final product turned out. Rough typical tungsten, however; will become smooth over time in abrasive drilling conditions.

How can the operator determine if there’s any hard metal when it’s not obvious?

Occasionally, a contractor will run into the problem of determining if there’s even any hard metal present on the tool joint. This issue comes up most of the time because there’s so much dirt and clay still on the raw joint right out of the hole, however; when the pipe’s been cleaned and/or sitting out in the weather for months, the rust will camouflage tungsten based hard metal especially when it’s inlaid or flush. In order to determine the presence of hard metal, it’s wise to brush the determined area and look for varying colors in the material. Lighter tint indicates hard metal while a darker tint indicates drill steel. Going one step further with sulphuric acid might give a better indication but with opposite effects of lighter drill steel and darker hard metal will occur.

The last resort option for identifying hard metal, if there’s no acid available, is to try and remove material with a large metal file and compare how the file grips the surface of the softer drill steel while having trouble biting on the hard metal. Oftentimes, thin hard band will allow the vices to actually bite through and grab the drill steel without any issues.

If I want to re-hard metal my string of drill pipe, do I have to be careful about what bands are laid on top of another?

Tungsten hard band can be laid on top or tied in to existing tungsten but not on top of chrome, however; there’s a couple of chrome type hard bands, namely Duraband and Armorcore M that can actually be laid over the top of tungsten without cracking. However; the disparity in price may deter some from using chrome type hard metal because it can range from 5 to 10 percent higher cost than plain tungsten. 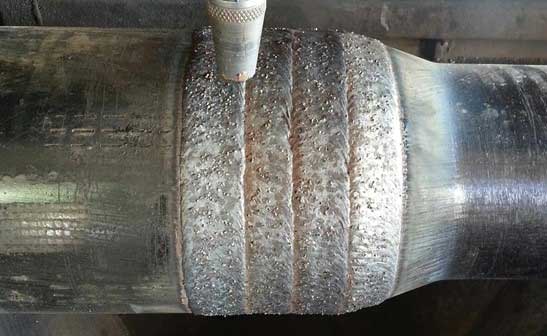 Build up and repair

Build up or refurbishing tool joints dovetails with applying hard metal. The two processes can happen during the same timeframe so it makes sense to take a look at how much thickness remains on the tool joints when considering adding metal.

Again, hard metal is applied to the tool joints in order to prevent abrasion occurring from drill steel turning inside casing and/or prevent wearing out tool joints against abrasive open hole environment. Regardless of wear prevention methods, once the tool joints are whittled down from abrasion, the drillers ability to bite or handle making and breaking of connections is reduced as well as performance. But what about when the vices get involved in the abuse? Tool joints on drill pipe will often become worn too thin to continue using and the whole joint often gets junked because of it, especially when the torque and performance is often determined typically by the box OD. The vices can actually “egg” the shape of the boxes and the pressures and abusive torqueing while trying to break out will cause severe damage to the threads underneath, as well.

The driller will want to consider building up the boxes primarily because they’re vulnerable to crushing while the pins will become coffee cone shaped and tong space will become limited. The process of building up will cure either issue.

What about the issue of too much hard metal and not enough tong space after a recut of the connection?” The most efficient process used to remove unwanted hard metal is called arc gouging. The process in the picture below is done by hand but machines can be programed to do the same for high quantities.

Due to a crater or low spot formed from removing the hard metal, a process known as making “butter passes” is used to fill the undercut area with drill steel.

Once drill steel is applied/tied in with existing hard metal and the drill steel is turned down, the extra tong space is established and vices are able to effectively grab the tool joint.

In summary, the hard metal can be arc gouged off, the gouged area filled with drill steel and the drill steel turned flush. The short tong area is now hard metal free and the whole tool joint is converted to pure tong space.