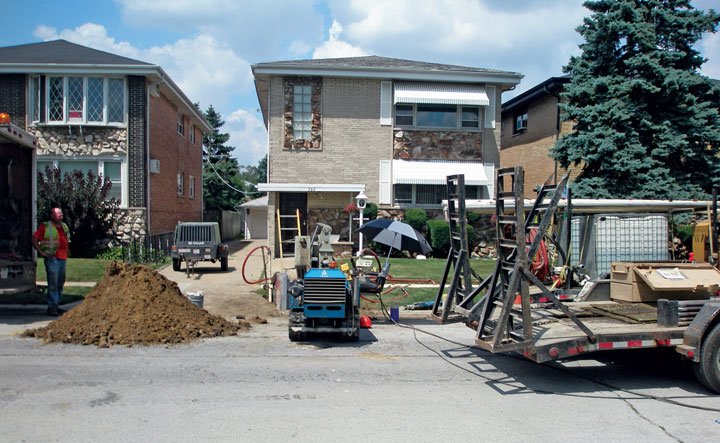 Calumet City Plumbing, Calumet City, Illinois, began as a small, family-owned business. According to president Mike Giglio, the company can trace its roots right back to the family’s kitchen table.

“It’s a second-generation business. My father started it. It was a typical kitchen table type thing where my mom was answering phones and my dad went out and did the work. He started out working out of a station wagon. He rented places until he built his shop in 1981,” said Giglio. “I took ownership in 1993 and we expanded in 1994 and again in 2003 and in 2015 we relocated to our current location.”

For many years, Calumet City Plumbing provided the services that most would associate with a plumbing contractor; it provided residential plumbing services while continuing to expand into more municipal and commercial level operations. In 2003, the company expanded its service offering even further with the purchase of a small directional drill.

Giglio explained, “My brother talked me into buying a used directional drill. We drove to central Michigan to pick it up. And we took it to a field and figured out how to use it,” Giglio said. “Then, we took it to a job in Brookfield, Illinois, where we had 50 water services to tap and install. They were relocating the main from the alley to the front and I had the services portion.

“It really wasn’t a starter project for someone just getting into the directional drilling market. Apparently, I didn’t do my homework before we started because there was cobblestone in the ground. So that drill quit on the first day! It was tired and old and we started beating up on it and burned the motor out.”

Frustrated, Giglio brought in a directional drilling contractor that promised to install two to three services per day. The contractor completed one the first day, none the second day and only a partial installation on the third day.

“Then he pulled the plug. He said, ‘You’re out of luck. I have other work that I can make money on, good luck.’ So, I called TT Technologies [Aurora, Ill.] to rent a drill and they brought out the Grundodrill 4X. They stayed with me and we figured it out,” Giglio said.

“After that job, we bought that drill and never looked back. It’s a real asset in what we do every day,” he said. “And we do things now that customers have been told by other contractors could only be done as open cut.” 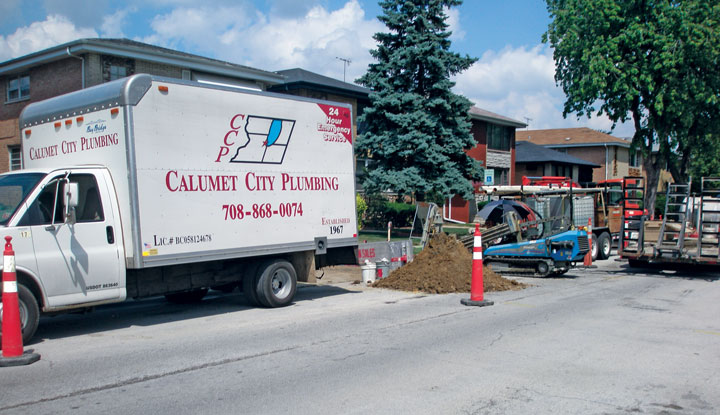 Giglio says the small footprint of the drill and the flexibility of the rods allows his HDD crew to do a lot of things that they would have never been able to do with another type of drill. Calumet City Plumbing is still using that same drill 15 years later for a variety of projects.

Giglio said, “HDD is an edge for us. It’s something that we offer that a lot of our competition does not. And that’s why it’s an integral part of our business,” Giglio said. “We’ve installed electric sleeves. We’ve done gas lines. We’ve done sewer mains on grade under four-lane roads. Not a problem. We’ve done 6-in. water mains, short runs.

“A lot of the residential work is water services. Some of the townships are not allowing repairs on lead services so they have to be replaced. And galvanized service repair isn’t an option. But whether it’s a basement house or slab house, a tight alley or a parkway in front with lots of room, we can maneuver that Grundodrill 4X exactly where we need to in order to get the job done.”

Calumet City Plumbing employs experienced plumbers that understand the basic design of slab houses in the area. This knowledge helps the HDD crew in determining where ductwork and drain lines are located under the slab.

For a typical service installation, Calumet City Plumbing HDD crews create a 2-ft x 2-ft hole in the utility room. Crews then drill from across the street, through the b-box hole to the access opening inside the slab and pull the copper service back with minimal restoration. According to Giglio, his crews have the process down and can complete those installations within an eight-hour day.

Skilled HDD operators, however, don’t happen by accident. It takes training and experience. According to Giglio, his HDD crew has both. “I have a crew that’s been with me for quite a while. Occasionally I’ll jump in and do some locating when needed,” Giglio said. “But our guys received some really high-quality training from Local Union 150. The Operating Engineers with Local Union 150 do a very good job of training. I’ve had two of my guys go through that program. When they got back they knew how to directional drill and locate and pullback. It was time and money well spent.”

Giglio utilizes other trenchless equipment, as well, including piercing tools and pipe bursting equipment. And with recent focus on infrastructure on the state and national level, Giglio sees the potential to expand HDD operations in the future. But no matter the equipment, Giglio is grateful for the people that work at Calumet City Plumbing.

He said, “With the people that we have here, I’m very fortunate. I’m grateful for the office personnel, the PMs, the bookkeeping end and especially the field guys. We get a winter like we got this year and it’s been cold. It’s hard on the equipment, but it’s harder on the employees. And when it’s 5 degrees out and you’re wet and it’s 2:00 in the morning and you’re still working, it takes a toll. We’ve done some drill work when it’s 5 below; it’s a different animal. It takes a lot of finesse and dedication. I’m lucky to have such dedicated, hard-working employees.”