The Knoxville Utilities Board (KUB) initially identified the Second Creek Trunkline Rehabilitation Project needing extensive rehabilitation and replacement work based on the results of its trunkline inspection program. The inspection revealed significant structural defects and a massive ‘gusher’ that was allowing a substantial amount of infiltration to enter the trunkline.

The 1,350-lf trunkline is located along the flow path of Second Creek near its mouth to the Tennessee River. Sections of the sewer are visible along the creek bank. It was believed that either Second Creek or a spring was the source of the ‘gusher.’ Partially collapsed sections of the system.

The trunkline generally follows the City of Knoxville’s Second Creek Greenway as it bisects the University of Tennessee (UT) campus. Additionally, the trunkline is located between two heavily traveled state routes near downtown Knoxville. One of these state routes was currently being improved with an extensive streetscaping project and the other was scheduled for resurfacing by the Tennessee Department of Transportation (TDOT). UT’s Neyland Stadium hovers over the project site and any events could not be disrupted in any way. All work had to consider UT, the City of Knoxville, as well as TDOT.

Based on a review of the as-built drawings and other records, the sewer was initially thought to be a mix of 48-in. diameter brick and reinforced concrete pipe. A replacement by open-cut excavation or tunneling method was considered but it was determined that those options would delay the project by requiring new easements, result in long-term disruptions to UT parking facilities, and be cost-prohibitive. Sliplining appeared to be the obvious choice as additional hydraulic capacity was not required and the work could be performed without significant bypass pumping. However, a plan and profile of the existing system were developed by KUB’s consulting engineers, Barge Waggoner Sumner and Cannon Inc. (BWSC), so that KUB could utilize their hydraulic wastewater model. An additional inspection determined the brick pipe was arched as opposed to being round, which meant that slip lining was not a viable rehabilitation technique for the entire segment. 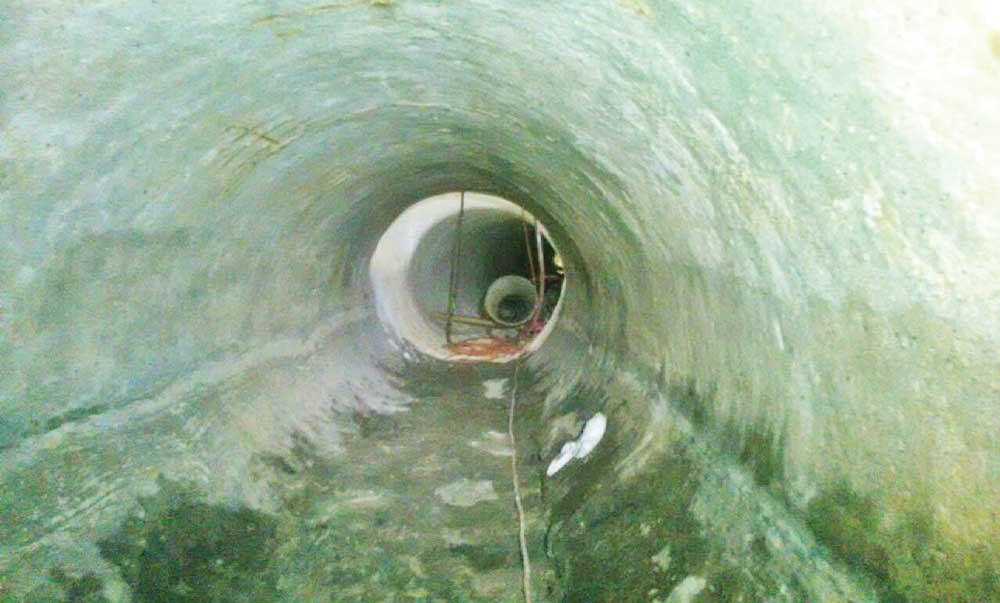 KUB and BWSC worked to identify potential solutions that would address the leaking and structurally deficient trunkline. The alternatives considered were lining (geopolymer, epoxy, PVC, or cured-in-place pipe (CIPP)); sliplining the reinforced concrete pipe and lining the brick sewer; sliplining the reinforced concrete pipe and installing a new sewer by open-cut excavation to replace the brick sewer; and tunneling. As part of the brainstorming process, the success factors were identified.

A matrix and weighted scoring system were developed to analyze the alternatives based on the project success factors. Project success factors, in order of importance, included cost; public impacts to parking, pedestrians and traffic including the greenway; lifecycle (operations and maintenance requirements as well as product life expectancy); schedule for easement acquisition, permitting and construction; and constructability (difficulty, risk, need for bypass pumping and potential for utility conflicts).

The spray-on lining systems provided the best alternatives for meeting the project needs, and Warren Environmental’s non-hazardous, high build, single coat epoxy system was the product selected for the project. Warren’s epoxy was spray-applied internally with workers inside the trunk sewer. This recommended alternative set itself apart with less risk during construction, less public impacts, as well as fewer schedule impacts. Due to attributes proprietary to Warren’s epoxy blend, they offered the only 100 percent solids epoxy with the capability to be easily sprayed in a single coat, up to 500 mills (1/2-in. thick). That allowed them to complete the project faster than alternative products and allowed for rapid-return-to-service. Moreover, the manholes were lined with Warren’s epoxy, eliminating the need to replace the assets. Lining of the precast vault structure.

However, the need for bypass pumping a peak wastewater flow of 24.5 million gallons per day (GPD) was the main drawback to this selection. Brainstorming by the project team led to an innovative solution for bypass pumping on the upstream end of the project. This idea decreased the size of the project footprint and allowed for construction during the football season. With this innovative thought and collaboration, UT approved a project schedule that extended into football season.

Some challenges overcome during construction were partially collapsed sections and severely deteriorated inverts in the conveyance system. As well as the steps, Warren Environmental’s approved applicator, A&W Maintenance,  had to take to stop infiltration before application. Point repair was required for collapsed pipe areas using Warren’s hydrophobic injection grout. Warren’s injection grout was well suited for filling large cavernous spaces and cutting off gushing water of high pressure and speed.

City of Knoxville’s Second Creek Greenway as it bisects the University of Tennessee (UT) campus.

The project cost was $2.1 million and the construction schedule was 120 days. Although pricing may be considered high on a per-foot basis, the project was considered a success based on a lack of public impacts and complaints. This construction occurred during two UT football games with no issues along a major pedestrian way into campus.

Infiltration from the ‘gusher’ was conservatively estimated at a constant 300 gallons per minute (GPM). This flow calculates to 432,000 GPD or 157 million gallons per year (GPY) of extraneous water to convey and treat. KUB has reinstalled a flow monitor on the trunkline and is currently evaluating the positive impact that this project has on their system.