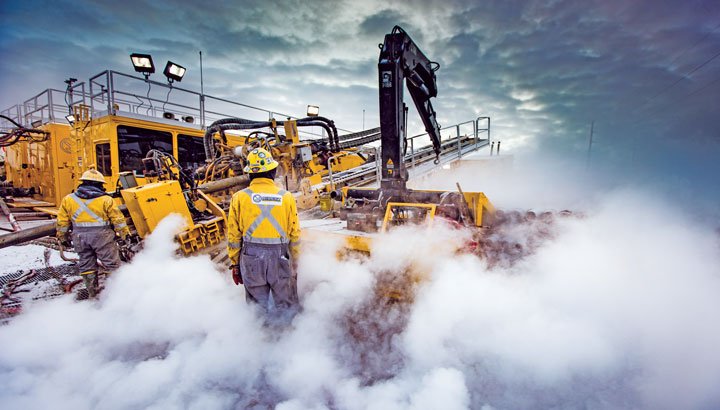 Direct Horizontal Drilling, of Alberta, was looking for a way to extend its reach at crossings, work more efficiently in poor geological formations and reduce its drilling schedules.

This led Tyler Calvert, technical manager at the horizontal directional drilling (HDD) contractor, to develop the company’s own proprietary electro-magnetic (EM) directional tools and HDD steering system. Calvert has almost 18 years in the HDD Industry, primarily focused on steering directionally drilled crossings. He has spent time working as a downhole directional driller and also as consultant for various oilfield and pipeline companies. Calvert has been a part of the Direct Horizontal team since 2008.

One of the questions most often asked about HDD steering is “Why is there a wire in the pipe?” This is especially true from clients that have downhole drilling experience. EM tools provide a solution to remove the wire in the pipe, essentially providing wireless tools. Direct Horizontal is always looking for new ways to increase productivity, lower costs and create a safer work environment, wireless tools fit the bill perfectly.

Calvert reviewed many systems and found Boregyde Inc.’s telemetry system best-suited to provide the down hole data in an EM system. Boregyde has long been interested in using its equipment in the HDD market and this provided them with another opportunity to showcase what its tool can do. To complete the package, high resolution directional sensors and top of the line pressure sensors were added. All of it in a package only slightly longer than conventional wired HDD tools but extremely efficient and accurate.

Information to the user at the surface is provided via Boregyde’s WETS (Windows Electro-Magnetic Telemetry System) software. Powered by batteries and easily configured for various data rates, Direct Horizontal uses WETS to receive toolfaces every few seconds and Inclination/Azimuth surveys as fast as 12 seconds. In most cases surveys can be completed while the next drill pipe is being added.


In order to add to the accuracy that the high-resolution sensors provide, a surface navigation system is also used to minimize the calculated ellipse of uncertainty. The Truegyde navigation system uses the sensor information provided by WETS to calculate survey stations and to provide surface tracking. High resolution DC tracking coils and Micro coils are used to further enhance the accuracy of the wireless tools.

Generally speaking, an HDD job is set up with a surface coil of 100-200 m on the entry portion of a drill and then a similar coil set up on the exit side. The accuracy of the tools allows an operator to drill in excess of 600 m without added surface tracking, however longer sections would not be out of the question.

Direct Horizontal has successfully used the combination of Boregyde/Truegyde systems on 16 crossings to date, ranging from 200 m to 1,000 m. The system has been used on Direct Horizontals rigs ranging in size from a Ditch Witch JT 100 to the American Augers 1.1-million-pound rig. Using tooling sizes from 4- to 8-in. and drilling hole sizes from 6.25 in. to 12.25 in.

The addition of the wireless tools to the operation has essentially increased the speed at which pilot holes are completed by almost 40 per cent, depending on rate of penetration. With the greatest advances being made in the time used for tripping pipe, being almost three times as fast. Another benefit that the tools have provided was the recent ability to easily “log” a previously drilled hole without the added time it takes for wired tools, allowing Direct Horizontal to trip tools almost 2,300 m in a short amount of time. A tool is programmed before it is sent downhole. This is also the setup Direct Horizontal uses while drilling. The yellow box on the right is the receiver that decodes the wireless signal.

Safety has always been a driving factor for new developments and the wireless tool is no exception. On each rig, using wired tools, a person is required to make a wireline connection. Using wireless tools this is unnecessary, meaning less time for a man to be placed close to moving equipment and slippery conditions.

For Direct Horizontal employees who work in some of the most extreme conditions found in North America with temperatures as low as -45 C, this is an extremely important development. This in turn has also allowed the rig personnel to concentrate further on other tasks, such as rig maintenance and housekeeping, resulting in less down time and more production.

Direct Horizontal has an in house directional/steering department consisting of eight people with a total of almost 75 years HDD experience, the company plans on growing that to possibly service other HDD contractors and clients as the need for wireless tools grows.