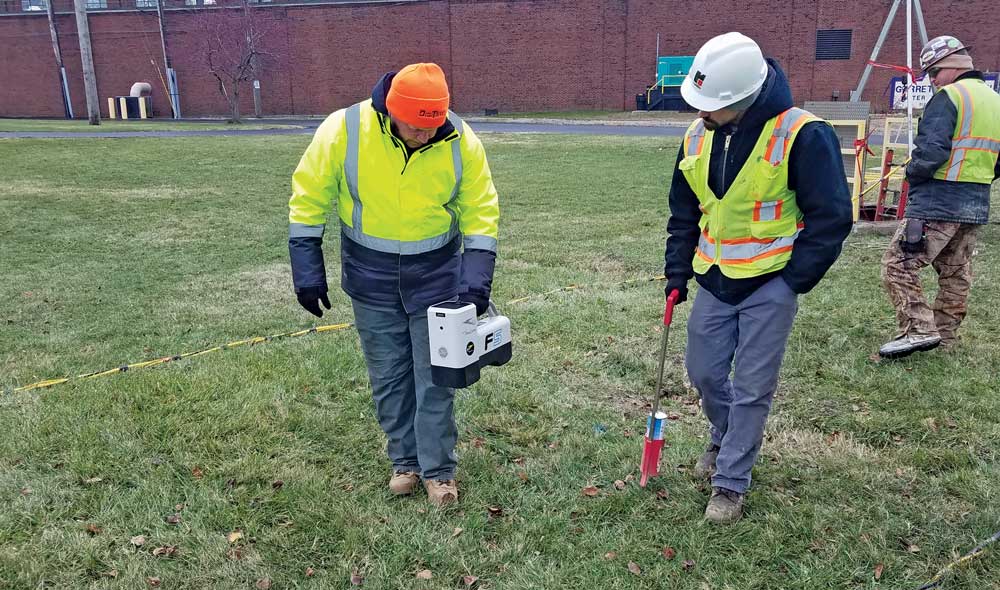 When people in the trenchless industry think of Digital Control Inc., they usually associate the name and equipment with horizontal directional drilling. However, one recent project on the lakefront in Cleveland, Ohio, could reshape the way those people look at the Washington-based locating equipment manufacturer.

For this project, which took place over several cold December days in 2018, Digital Control Inc. (DCI) customer relations manager Terry Crosier was tasked with helping track a diver 75 ft below ground. While not a typical project by any stretch of the imagination, Crosier was confident his Falcon F5 would be able to track the diver.

Crosier was onsite at the request of The Ruhlin Company, the general contractor on a dock wall reconstruction project for the Cleveland-Cuyahoga County Port Authority. Ruhlin’s crews were charged with reconstructing 1,200 lf of dock wall at the Port Authority’s Cleveland Bulk Terminal site. This included driving new sheet pile bulkheads along the shores of Lake Erie.

While on the surface, this seems straightforward enough, Ruhlin knew, based on the available reports, that a major water intake tunnel – constructed in 1914 to Cleveland’s Garrett A. Morgan Water Treatment Plant – was approximately 70 ft below ground somewhere along the project area. Driving a sheet piling into this tunnel could prove catastrophic to Ruhlin and Cleveland’s west-side water supply. The plant pumps an average of 60 million gallons of water a day to the residents and businesses located downtown and in the western and southern suburbs of Cleveland. The idea was to locate the brick and mortar tunnel where it intersects the bulkhead and drive the piling shallower in this section of the project.

“In this particular scenario, we would have had to physically probe down to the utility we were to locate,” says Ruhlin superintendent Thomas Hill. This proved difficult since the records of the exact tunnel location were poor and the geography above the tunnel had changed considerably since its installation. “The original intent of utilizing the DCI equipment was to track the alignment of the pipe to minimize the window of exploration with probing,” Hill adds. 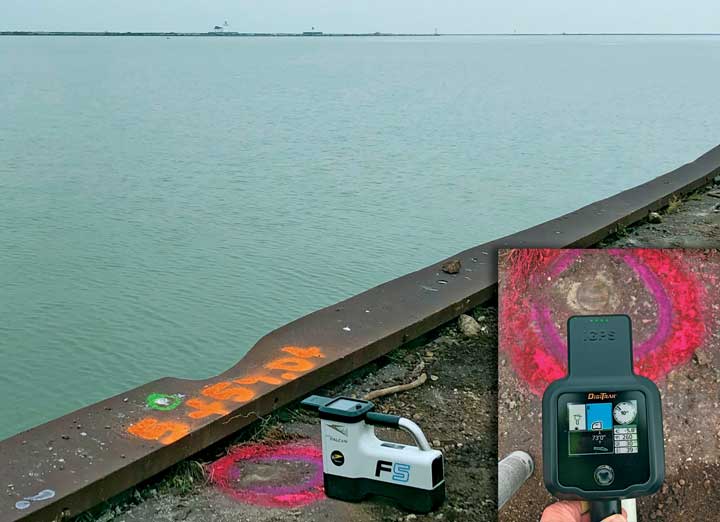 The Falcon F5 on the shores of Lake Erie, 73 ft above the water intake tunnel.
The painted circle is the survey monument unearthed by The Ruhlin Company crew.

Hill was acquainted with DCI through Ruhlin’s regular work with Miller Cable Company, a subcontractor that uses DCI’s equipment. Ruhlin had inquired about the use of DCI’s technology on a previous project that never came to fruition. Crosier jumped at the opportunity to put the DCI equipment into action for this unique and challenging locate.

A plan was put in place and Crosier fashioned a waterproof tube of PVC to hold the sonde, which would then be taken down a manhole by a diver with Underwater Marine Contractors Inc. and trailed behind him on a tether. Crosier would track the sonde from the manhole, near the front door of the treatment plant, to the edge of Old River (a tributary of the Cuyahoga River), a distance of about 200 ft.

The crews then had to drive over the river and attempt to pick up the signal on the other side of the river at a marina before following it to the Lake Erie shore. All told the distance traveled would be about 3,000 ft. All of this work was carefully coordinated with the Cleveland Water Department, which had to shut off the intake while the diver was in the 7-ft tunnel. This gave the team a three- to four-hour window to complete the work. 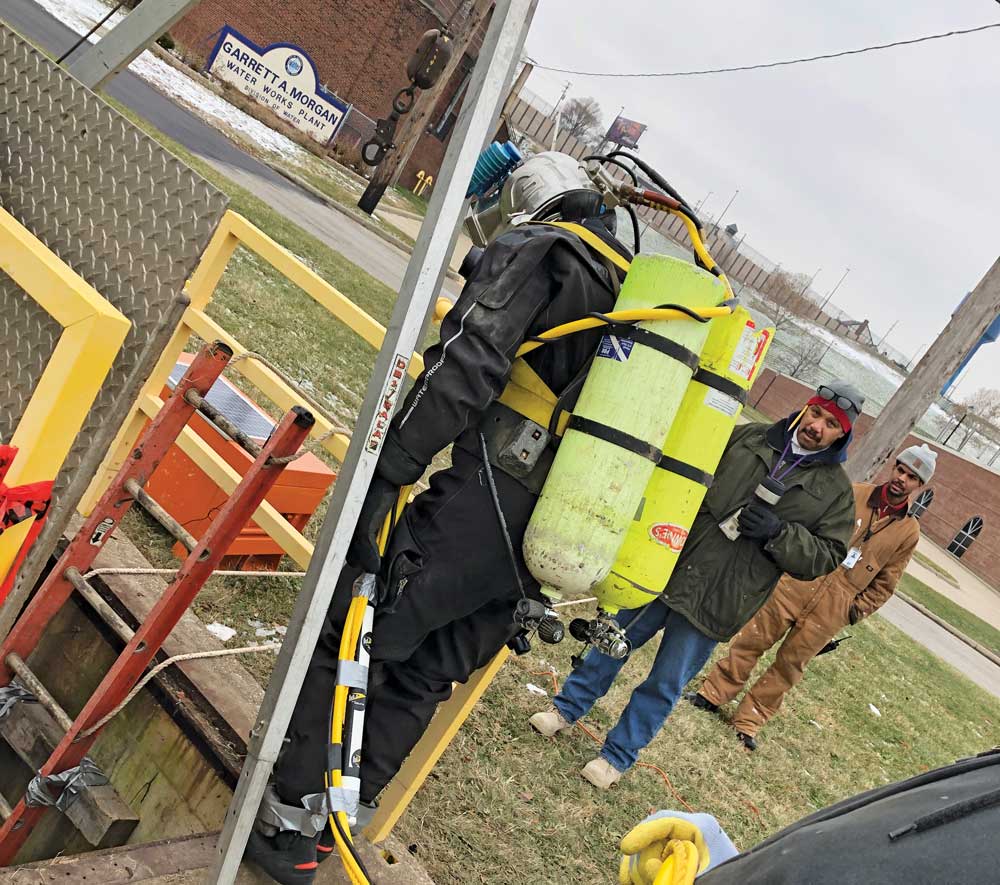 The first day Crosier and the crew experienced some technical difficulties both getting a stable signal at the surface and on the diver’s end. The second day of the project Crosier was able to get some locates but the diver had to abort the project after an equipment issue came up.

They say the third time is a charm; in this case, the saying held true. Crosier was able to get a strong signal to follow and the diver hit no snags in the tunnel. In the meantime, Ruhlin’s crew uncovered a survey monument near the shoreline. “Due to this find, the project was able to use DCI’s technology to verify the tunnel location in reference to the survey marker,” Hill says.

Crosier recalls that on the third day he was able to find the right signal strength for the Falcon F5 transmitter and tracked the diver for the first 200 ft to the Old River banks. From there, the diver — traveling at about 10 mph using an underwater propulsion vehicle — would cross under the river, the Cargill Deicing Technology facility, a yacht club, several sets of railroad tracks and finally under an iron ore storage site before reaching the shoreline.

“I had exhausted all points in the middle from 200 ft from the manhole (Old River bank) to the 2,000-ft mark along the alignment with no luck,” Crosier says. “I decided to go to the general area at the end of the on-land area where the tunnel would enter into Lake Erie. I picked up pitch and roll with steady signal and was able to identify front and rear locate points. The diver had finally made it to the end and was traveling slow enough for me to track.”

Crosier followed the diver for about 20 to 30 ft and, unbeknownst to him, was tracking straight for the survey monument unearthed by Ruhlin days before. At the monument, Crosier was able to verify depth and position of the tunnel with strong locate points and depth at 73 ft.