A North Carolina Department of Transportation crew was inspecting its box culverts under heavily traveled Hwy 15-501 in the Town of Chapel Hill, North Carolina, when they noticed three large failing corrugated metal plate arches under nearby Elliott Road.

Since Elliott Road is the responsibility of the Town of Chapel Hill, the NCDOT provided the town a Bridge Inspection Report, noting that the existing three barrels approximately of 190 in. Wide X 120 in. Rise CMP Arch pipes were near structural failure and in need of immediate repair. The report was extensive and noted “Widespread 100 Percent Section Loss,” “Deformation,” “12-in. Bulge in Sidewall,” “Alligator Cracking in Asphalt Wearing Surface,” and “3-in. Settlement in Curb and Gutter.”

The Town of Chapel Hill is a beautiful community and is the home of The University of North Carolina. The town is especially sensitive to the impact of construction on the environment. Elliott Road has a traffic count of more than 7,000 vehicles per day and is the home to many businesses that would be affected by any type of road closure. Also, because the flow of water through the failing culvert pipes is from Booker Creek, which is prone to flooding and has historically caused major damage when it does so.


Consultants were hired to study the Booker Creek Watershed, hoping to improve the quality of water and reduce flooding. The consultants recommended several ways to implement flood control improvements, and improving culverts is on the list. Consequently, rehabilitating the existing structure to handle the load bearing requirements of Elliott Road, while providing maximum hydraulic capacity was extremely important.

Hydrostructures, of Pittsboro, North Carolina, was contacted in fall 2013, because it had participated in stormwater evaluation for the town. Hydrostructures is a civil engineering firm, which provides inspection, evaluation, mapping, and design of wastewater, stormwater and water collection, conveyance and distribution infrastructure. The company was chosen to determine the best solution to repair the failing culverts.


“We began by making a matrix with 10 different options, and then narrowed those down to three or four,” says Tom Stevens, the design engineer with Hydrostructures. “We considered a variety of round pipe options as well as cured in place liners, spray on liners, structural aluminum liner plate and spiral wound-coil liners.”

There were 10 selected criteria on which the alternatives were evaluated from most to least important, relative to each other: Flow Capacity, Design Life, Increased Structural Integrity, Adaptability, Total Cost, Environmental Impact, Community/Traffic Disruption, Permitting Difficulty, and Contractor availability. Ultimately Precision Pipe and Products’ InfraSteel arched smooth wall steel liner was determined to be the best product for the job. 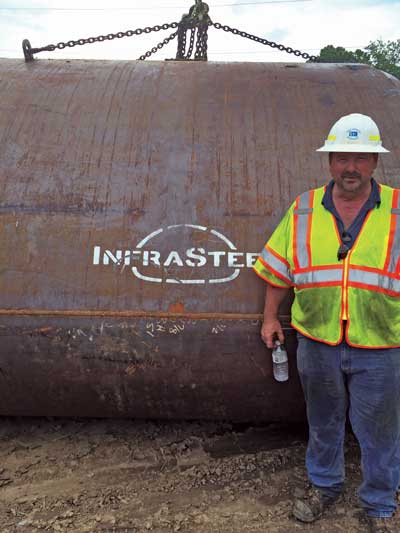 Tim Keeler, superintendent with Curtis Contracting of West Point, Virginia, and his crew began construction in early July 2016 and completed the work in 90 days.

Precision Pipe and Products first inspected the failing structure in January 2014 because Dave Easter with Hydrostructures was familiar with Precision Pipe and Products’ InfraSteel culvert rehabilitation system, and thought that InfraSteel’s Smooth Wall Carbon Steel liner might just be the solution to the problem. InfraSteel matches the radii of the existing structure and Hydrostructures’ report noted it “is conducive to providing large cross-sectional area for flow capacity at low creek flow depth” and “its smooth surface/ low manning’s “n” also increases flow capacity.” InfraSteel was noted in the report to have “impressive material testing data.” Hydrostructures determined that InfraSteel met both its structural and hydraulic requirements and could also be extended to provide for future expansion of Elliott Road.

In January 2016, Hydrostructures notified Precision Pipe that InfraSteel was the chosen liner for the project and that the project would be going out for bid. Load bearing calculations were immediately done by D H Charles Engineering’s Cardiff, California office to determine the wall thickness, and InfraSteel’s manufacturing plant held production time, so that production of the liner could begin immediately, once the contractor was determined.

Tim Keeler, with Curtis Contracting of West Point, Virginia, and his crew began construction in early July 2016 and completed the work in 90 days. The crew began by creating a construction entrance from Hwy 15-501 with 300 tons of rock and established a work zone on the outlet end. This allowed the work to be done without disruption and disrepair of the Burger King parking lot adjacent to the site. The inlet end was accessed only by small equipment that was brought through the barrels, so as not to disturb the trees and property near the inlet. Curtis crews welded the joints together by welding the bottom with inverted bevels from the inside, so welders were not required to get under the liner, and standard bevels from the bottom haunches to the top center, which were welded on the outside of the liner. The finished welded joints insure no possibility of joint failure in the future.

“We worked in the dry using bypass pumping and we used a Caterpillar 330 trackhoe to push the welded up 10-ft lengths into the barrels,” Keeler said.

Keeler was able to manipulate the liner into place despite the collapsed and deformed areas of the existing structure. The culverts were also at an approximate 45-degree offset from Elliot Road. Two of the three barrels had Curb Drop Inlets, which were lined with 18-in. round liner and tied into the main liner barrels by welding, allowing drainage from the street level into the structure.

Once the liner was in place and the welding was completed, the annular space between the liner and the existing corrugated metal pipe was grouted by pumping grout from inside of the liner through 2-in. grout ports, which were strategically placed to insure there would be no voids. The project was completed for $736,830, without any traffic interruption.

In October 2016, shortly after the installation, North Carolina was hit by Hurricane Matthew, which devastated certain parts of the state. Flooding in the state caused more than $1.5 billion in damage and was attributed with 26 deaths in North Carolina alone. Although the Chapel Hill area wasn’t hit as hard as other areas by the storm, there was a lot of rain and high water that tested the flow of the rehabilitated culverts and the banks of the finished construction site.

The Town of Chapel Hill’s engineers inspected the site during the high water levels and were pleased with the performance of the rehabilitated structure, which has a new life expectancy of 75 to 100 years.

Cullom Walker III, is a partner at Precision Pipe and Products and co-founder of InfraSteel Culvert Rehabilitation.