City of Fort Wayne Plans for the Future 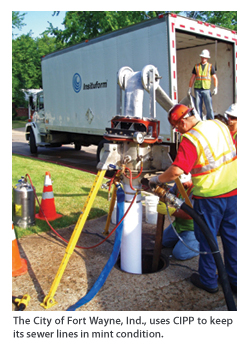 When it comes to predicting the future of its sewer infrastructure, the City of Fort Wayne, Ind., has something better than a crystal ball — members of its Water Resources team, which run a forward-looking sewer repair and replacement program.

The sewer rehab team is under the leadership of Mike Hicks, program manager-sewer repair and replacement. His passion for predicting sewer futures has generational overtones. “I don’t want to leave my grandchildren with problems that affect the quality of their lives,” Hicks said. “Sewer rehabilitation is really economic development. “It is an asset that opens up an area for new homes and businesses.”

Hicks and the sewer rehab team handle the design end of sewer repair and maintenance; construction manager Ken Stempien handles the construction end. Both men and their co-workers are part of the city utilities department, directed by Kumar Menon.

Much of the city’s complex analysis of its sewer system can be traced to residents’ calls about basement sewer backup or flooding. Each individual datum is plotted into a master plan that analyzes the present status of the entire system, then projects twice into the future — 20 and 40 years out.

“We can’t over-emphasize the importance of education and information-sharing with other municipalities to learn new and better ways to solve problems,” Stempien said. “The Utility has given many of us the opportunity to attend conferences and classes. But few engineers, inspectors and others involved in these projects actually attend these classes. They are missing out on valuable information that will them to improve their specifications.”

The Water Resources team’s vision is integrated into the city’s consent decree with the U.S. EPA to prevent and minimize combined sewer overflow (CSO) and sanitary sewer overflow (SSO) into receiving waters.
“Fort Wayne is one of the most proactive cities we work with,” said Jay Ferguson, business developer manager for Insituform Inc., a principal sewer rehabilitation services provider to Fort Wayne. “The city’s Utility Department has a better lock on how to prevent a problem before it happens than many municipalities.”

This phase of the Flaugh Ditch project rehabilitated 2,900 lf of 24-in. diameter reinforced concrete pipe and 3,150 lf of vitrified clay pipe with diameters ranging from 8 to 12 in. Sections of the host pipe were initially installed in the late 1960s and early 1970s.

“Obviously, the best solution for sewer repair or upgrade is total excavation and replacement,” said Hicks. “However, that could cost over $300 per foot, not including large diameter pipe. CIPP, on the other hand, costs only $40 per foot. Trenchless technologies like CIPP are also significantly less disruptive. ”

For the Flaugh Ditch project, the City and Insituform communicated with affected residences and businesses about the need to temporarily restrict water usage. This allowed each inversion to be accomplished within a workday without the need for costly sewer flow bypasses. The work included a line that runs under Illinois Road, a major thoroughfare with an average daily traffic rating of 32,000. Trenches would have closed the road for approximately two months.

Improved sewage flow from the Flaugh Ditch CIPP allows 210 residences to get off their on-property septic systems and tap into the line that leads to the treatment facility. Increased capacity created by the rehabilitated line also opens the way for the expansion of local business and commerce.

The liners for the project were resin-impregnated in Insituform’s wet-out facility in Indianapolis where wet-out manager Ralph Western works with AOC to improve performance. “AOC has been extremely helpful in the development and testing of new technologies,” he said. “Examples of these are projects promoting resin stability during production and projects that improve cost effectiveness.”

The wet-out facility’s controlled conditions ensure optimum wetting of liner sections before they are shipped in a refrigerated truck. Keeping the liner at a lower temperature prevents the resin chemistry from prematurely reacting before the liner is installed.

As the impregnated tube is inserted onsite, water pressure is used to move the tube forward as it inverts and lines against the inner surface of the host pipe. When the tube has been completely inverted, the tube is heated, typically with hot water or steam, to raise the temperature of resin. Heat accelerates the chemical reaction that causes resin molecules to permanently crosslink into a highly corrosion-resistant solid.
The host pipe gets a liner that serves as a “pipe within a pipe,” with a projected service life of at least 50 years. Its seamless construction is not interrupted by joints, cracks and other damage that existed in the original pipe. To reinstate laterals into the sewer, access openings are robotically cut into the appropriate locations of the liner and connectors are bonded in place.

Mapping Out the Future

Hicks and his team back their vision with a well-executed plan. Working with the geographic information systems department, the Water Resources team divides the city into 352 quarter sections that have sewer problems. Each quarter section has its own statistics for basement backup and sewer calls. Plotting the number of calls on a map provides a visual analysis of the severity of the situation by core section.

“Seventy-six percent of all the calls come from the top 100 quarter sections out of the 352 quarter sections that have sewer problems,” Hicks said. “Further analysis shows that the condition of the pipe has a lot to do with when it was built. There are points in time for major sewer pipe installation in Fort Wayne.

“The oldest sewer pipe is brick and some vitrified clay that was installed in 1865. The pipe material itself has stood up well over time, but there have been problems with failed mortar and loss of seal at the joints.”
The second major wave of sewer pipe installation was the laying down of clay pipe between 1918 and 1923. The next major installation wave was from 1953 to 1973.

“It is possible, that less than ideal installation was not so much a case of poor workmanship as it was rushed workmanship,” said Hicks. “There was a boom in population around 1959, and the demand for homes was high. However, the process of trying to put a sewer line in fast could have led to more problems.”

With regards to the city’s sewer infrastructure, the Water Resources team is on a path to go beyond staying even, which is a daunting enough task by itself. Statistics present a formidable race with time. The average age of a rehabilitated pipe is 71 years. And by 2048, more than half the city’s sewers will be more than 100 years old.

The master plan developed by Water Resources is designed to determine the optimal time to rehabilitate these aging sewer lines before they exhibit serious failure. Trying to stay on or ahead of schedule is Water Resources contribution to the future of Fort Wayne.

Ben Bogner, P.E., is infrastructure market development specialist for AOC, which is based in Collierville, Tenn.