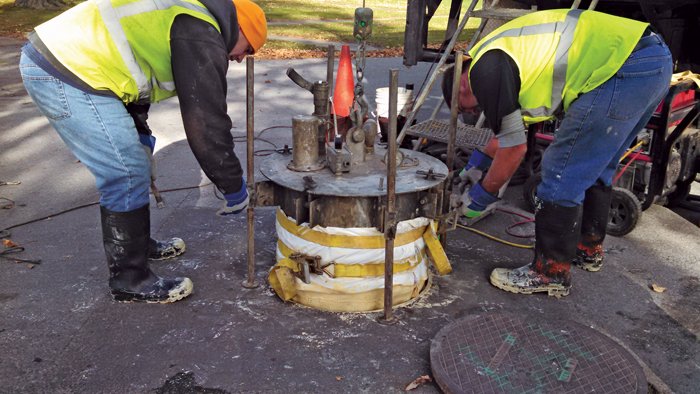 Published by Tom Fuszard March 3, 2015 View Profile
Traditional manhole rehabilitation can be costly and time consuming. The accompanying disruption to traffic creates irritated business owners and residents. A recent project in Marengo, Iowa, proved that cured-in-place (CIP) technology, a relatively new process in many parts of the country, is both efficient and, in the long term, economical.

Situated in the Iowa River valley in southeastern Iowa, Marengo is home to more than 2,500 citizens. The City, which sits on a bowl-shaped parcel of land, uses a lagoon structure for wastewater treatment, says city administrator Brent Nelson. In addition, the city’s proximity to the Iowa River results in a high water table.

The City of Marengo has known for years that its system has issues, Nelson says. Severe rains cause discharge rates from the lagoon — typically 200,000 to 250,000 gals a day — to quadruple. The system is at least 50 years old, with infiltration being the biggest issue.

The City turned to Des Moines, Iowa-based Veenstra & Kimm Inc., a firm it has worked with before, for assistance. The result was a three-phase Sewer Rehabilitation Project. Phase 1 took place from mid-May to early November 2014. That phase involved nearly 20,000 ft of sewer pipe and 48 manholes, mostly of brick design. Of the 48 slated for rehabilitation, 27 needed reconstructing.

According to project engineer Dave Schechinger, of Veenstra & Kimm, manholes in areas with a high groundwater table would have required a significant amount of preparation and involved shutting down intersections for an extended period of time. Heavy equipment would be needed to remove the water and excavate the site. Through a bidding process, Veenstra & Kimm selected Visu-Sewer Inc., of Pewaukee, Wis. In addition to rehabilitating 21 manholes, Visu-Sewer installed National Liner cured- in-place pipe (CIPP) in 19,888 ft of 8- to 12-in. sewer pipe. The CIPM liner is composed of a gas-impervious fiberglass membrane sandwiched between two layers of woven fiberglass. Tucked inside each liner is a disposable bladder. Once inflated, the bladder forces the liner to conform and bond to the walls of the manhole. The liner is then steam cured.

Cementitious applications can structurally rehabilitate manholes, says Visu-Sewer sales manager Randy Belanger, but the mortar does not withstand high levels of hydrogen sulfide or other corrosive chemicals. That’s another reason why cured-in-place manhole (CIPM) lining was specified for the City of Marengo project.

Manufactured by McNeil Technologies, the CIPM liner is composed of a gas-impervious fiberglass membrane sandwiched between two layers of woven fiberglass. Tucked inside each liner is a disposable bladder. Once inflated, the bladder forces the liner to conform and bond to the walls of the manhole. The liner is then steam cured.

“It’s a very detailed process to ensure the liner binds properly to the structure,” Belanger says.

Onsite, Visu-Sewer crews apply epoxy resin to both the inside and outside of the liner. They then lower the liner into the manhole and inflate the bladder with steam. (The extreme weight of the resin-coated liner allows it to drop by itself.) Under normal circumstances, steam curing takes one and a half to two hours, Belanger says. Because the resin is heat sensitive, crews may wait until late afternoon or evening to line a manhole. Including prep time, Visu-Sewer crews can install, on average, several manhole liners a day.

“This will structurally rehabilitate the manhole, eliminate inflow and infiltration and prevent chemical attack or corrosive attack,” Belanger says, adding that any type of manhole can be lined.

Manholes can be lined to the invert, but a bypass must be employed. Lining for this project went only to the bench, Belanger says, so bypassing was not required.

Because each manhole liner is custom made, the process is a “niche application,” Belanger says. He estimates that a typical CIP lined manhole runs $400 to $600 per vertical foot. That compares to approximately $125 to $145 per foot for a standard cementitious application. CIP manhole liners, however, have a 100-year design life and 20-year warranty.

Some rehabilitation and new construction projects require new manholes. If new sewer manholes will face hydrogen sulfide (or other corrosives), Visu-Sewer’s Randy Belanger recommends applying an epoxy coating to the structures before they are put into service. He further advises resetting the frame and casting before any inserts are installed, if that’s the chosen application. CIPM lining, he points out, is a comprehensive solution.

Schechinger, whose firm has worked on numerous wastewater treatment projects, says EPA’s guidelines suggest inspecting a portion of a system every year.

“Try to have a majority of the system inspected once every five to seven years, in general,” he says. This can minimize the costly repairs often associated with emergencies. These affect adjacent properties, and can involve shutting down intersections for days or weeks at a time. Some things to look for are cracks in seals, which are common in parts of the country susceptible to freeze/thaw cycles.

Nelson cautions that a city’s infrastructure could be 50 or more years old. That, of course, includes manholes, many of which were built of brick. He believes that CIPM lining is a much better process over time.

“It’s proven to me that it’s going to last longer than the grouting,” he says.

Some rehabilitation and new construction projects require new manholes, of course. If new sewer manholes will face hydrogen sulfide (or other corrosives), Belanger recommends applying an epoxy coating to the structures before they are put into service. He further advises resetting the frame and casting before any inserts are installed, if that’s the chosen application. CIPM lining, he points out, is a comprehensive solution.

“[It] really solves all those problems in one product,” Schechinger concurs: “The lining process fit in pretty well with this installation.”

Tom Fuszard is a business writer from New Berlin, Wis.