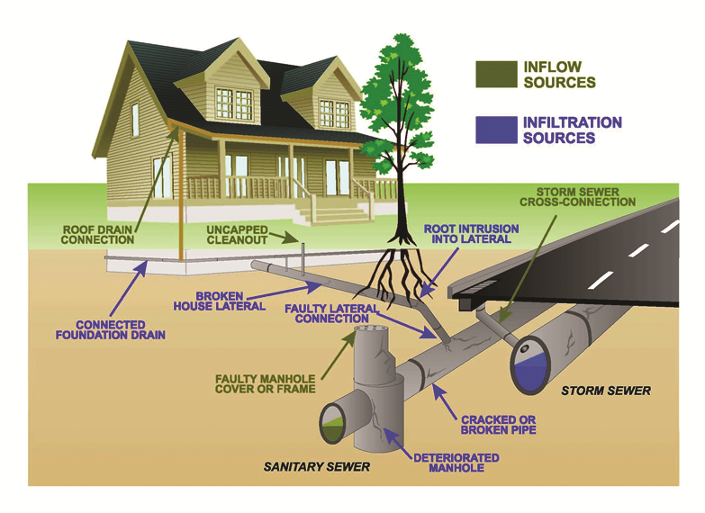 How Big a Problem is Inflow and Infiltration?

What is the I/I load on our local wastewater treatment plant? Is it at a problem level and how much is it costing us? How much I/I is occurring nationwide? How can EPA (or any state agency) develop a rational strategy for regulating permit holders and providing technical assistance without knowing solid information about the quantity, distribution, and magnitude of I/I in public sewer systems?

These kinds of questions have troubled me since first working for the Tennessee Division of Water Pollution Control in 1976. While our industry has made great strides in measuring flow and developing sewer rehabilitation materials and techniques, we still do not have a system-by-system picture of I/I nationwide. Having that information could greatly benefit the trenchless industry for making business forecasts and focusing marketing.

The U.S. Environmental Protection Agency (EPA) conducts the Clean Water Needs Survey (CWNS) every four years to summarize the needs for each state in dollars. However, the actual quantity of I/I is not reported. Instead, the costs are compiled from surveys of municipalities reporting their estimated needs for correcting I/I related problems. In Tennessee, for example, I/I-related needs were estimated to be $290.3 million as reported by 42 municipal systems. Did that mean that only those 42 systems represented all the I/I-related problems for Tennessee? In contrast to the EPA estimate, the results from a four-year study that determined the quantity, scope, and characteristics of I/I of all NPDES municipal wastewater in Tennessee may add significantly to the understanding of this problem. This study evaluated daily influent flows, influent organic load, and rainfall for one year for each of the 243 systems. The results showed that those systems are treating 120,795 million gallons (457 million m3) clear water annually. Figure 1 shows that this represents 45.38 percent of all influent to Tennessee wastewater treatment facilities on an annual basis. Additionally, I/I represented more than half the annual flow in two-thirds of those systems.

The study used data routinely recorded daily by plant operators in MORs (Monthly Operations Reports) required by Tennessee and other states. Those reports form the basis of the DMRs (Discharge Monitoring Reports – also known as NPDES reports) required to be submitted to the US EPA by each treatment plant’s operating permit. An earlier study (Kurz & Qualls, 2001) used the data in DMRs to estimate I/I in EPA Region 4. However, that approach was limited because the flows and organic levels (usually measured as BOD – Biochemical Oxygen Demand) were only reported as monthly averages. The process of averaging for a month masked the seven-day periods of low flow needed to estimate base flow from users. The advantage of using DMRs in the 2001 study was that the data was available electronically in EPA’s PCS (Permit Compliance System) database. The current study was much more labor intensive since it required transcription of 170,000 daily data entries from paper records into Excel spreadsheets to identify the low flow values.


In addition to annual I/I, the effects of RDI/I (rainfall dependent I/I) and long-term dry weather infiltration were also estimated for each system. RDI/I was estimated by linear regression of I/I quantity compared to rainfall depth for discrete rainfall events. Linear regression is a highly reliable method for this purpose (Kurz & Hamilton, 2010 and Kurz et al, 2003). In this case, the regression process was modified slightly and incorporates a simple data transformation procedure (Kurz et al, 2009a & 2009b) that greatly improves the level of confidence (shown as a 95 percent confidence interval) for the projected values. The results showed that 78 percent of the plants would likely exceed the nominal capacity listed in their permit when the RDI/I flow increases for a two-year storm (about 3.4 in. or 8.6 cm in 24 hours for middle Tennessee). While that figure is greater than expected, it is not necessarily cause for alarm since most plants have additional capacity to absorb peak flows. However, that additional hydraulic capacity threshold was not recorded in the permit summary (as shown on the state website). Therefore, it was not possible to determine which plants may be nearing a critical hydraulic overload condition.

Recent guidance documents from EPA (2014a & 2014b) and The Federation of Canadian Municipalities (2003) describe an approach for estimating I/I which relies on hourly flow monitoring. However, most treatment plants record flows from chart recorders or totalizers on a daily basis. The point of the present study was to demonstrate a simple approach that uses data already routinely collected daily by plant operators that did not require installation of additional equipment or costly engineering studies. Additionally, the study concluded that analysis of flow alone – without considering dilution of BOD (or CBOD – Carbonaceous BOD), may not be sufficient to detect dry weather infiltration.

Average BOD concentrations in the influent to plants in Tennessee varied from 32 to 893 mg/l (minimum concentrations were much lower). The range is shown in Figure 2. The instances of high concentrations of BOD were usually associated with known industrial discharges. Other investigators (Bounds, 1997 and Carcich et al, 1972) found that undiluted residential BOD concentrations averaged around 350 mg/l. This figure was also used by EPA (1977 & 2002) as an average concentration for undiluted residential BOD in its guidance for design of pressure systems and small alternative treatment systems. When the Tennessee influent BOD levels were analyzed to estimate the amount of I/I dilution, about a third of the total I/I was attributable to dry weather infiltration, which was not detected by flow analysis alone. In a few cases, infiltration may be overestimated due to significant, dilute industrial flows or flows from combined sewer systems.

The good news is that this situation can be reversed and the savings can offset the costs for correction. 27 project areas in the first Nashville OAP (Overflow Abatement Program 1989-2005) and four project areas in Brentwood (representing about 120 miles or 193 km of pipe lining for the 31 project areas) were rehabilitated using trenchless techniques and extensively monitored to determine the amount of I/I reduction and the associated program costs (Kurz et al, 1997, 2004, 2012). The aggregate reduction was about 50% for annual I/I, 24-hour RDI/I and peak-hour RDI/I. Service lateral and manhole rehabilitation was required in each project of lining the public sewers to minimize groundwater migration. Based on that experience, the cost to achieve 50 percent reduction across the state was estimated to be $1,140 million (US) for installation (pipe, lateral & manhole rehabilitation), long-term before-after flow monitoring, CCTV inspection, and engineering. When compared to the potential O&M savings, then this expense could be paid off in ~12 years (interest rates not considered).

This approach of using treatment plant flow, rainfall and influent characteristics from MORs does not replace comprehensive flow and rainfall monitoring and engineering studies to evaluate I/I and RDI/I when planning rehabilitation projects. Especially in larger systems, it is critical to divide systems into tributary basins for monitoring and prioritization (Kurz, et al, 2005 and Stevens, 1993). Instead, the intention was to analyze all the collection systems in the state using a uniform procedure to provide information for Tennessee program managers and decision makers. Additionally, the non-proprietary spreadsheets have been adapted for use as an “I/I calculator” for the state agency. Small communities are often reluctant to spend any money for additional equipment or engineering studies. This tool may provide an opportunity for operators to help themselves to determine the quantity and magnitude of I/I in their systems. Once the data is in a spreadsheet, it takes about 15 minutes to analyze operations for one year. This study was conducted as individual research to promote better planning and management of public sewer systems, and was not supported or sponsored by any agency or company. However, the database and results were freely shared with the State of Tennessee. Subsequently, the Tennessee Division of Water Resources has begun to use the results and the analytical tools for evaluating the effectiveness of I/I reduction for systems requesting moratorium relief. The results were also incorporated into the 2016 ASCE Infrastructure Report Card for Tennessee.

The completion of this study demonstrated that if a single investigator can analyze an entire state, then it should be a simple matter for the process to be replicated in every state by the appropriate agencies with greater resources.

George E. Kurz, P.E., DEE, is a consulting engineer based in Madison, Tennessee, with a long history in the trenchless industry.