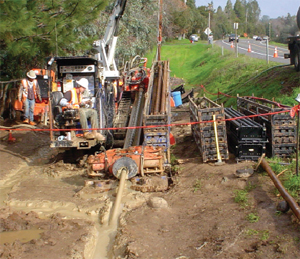 If horizontal directional drillers were asked to describe their drilling fluid, the most likely word out of their mouths would be “mud.”

One can compare the velocity of drilling fluid to that of a flowing river transporting silt and sand. However, the fluid in the borehole is not always moving (e.g. changing rods, equipment failure, etc.). It is during these times that it becomes important to maintain the suspension qualities of the fluid even when static. This characteristic is “gel strength.” If a given fluid does not have enough gel strength to support the cuttings, one risks loss of flow, frac-outs, increased pullback pressure and the possibility of getting stuck. The second function of a drilling fluid is to maintain borehole stability. This is especially important in unconsolidated and loose formations. Hydrostatic head pressure exerts force on the borehole walls helping to increase stability. Viscosity also increases borehole stability and helps to decrease fluid loss. Viscosity is a measure of the resistance to flow or the thickness of a fluid.

Finally, an important but sometimes overlooked property is that the drilling fluid cools and lubricates the bit. This improves penetration rate and reduces wear on the cutting face and drill rods. If one is drilling with a locator sonde it is extremely important to keep temperatures low to avoid burning up the unit. Drilling fluid plays an important role in cooling the sonde and the drill steel.

As a non-Newtonian fluid, bentonite encompasses all of these basic principles. By nature, bentonite has the ability to achieve gel strength — higher gel strengths can be achieved with additives. Whether you are drilling in reactive or non-reactive soils, consolidated or unconsolidated soils, bentonite is quite universal.

Throughout the years, drilling fluid manufacturers have produced a number of additives to tackle just about any geological formation. However, hard rock and very dense soils have always presented a challenge for bentonite. The added time and tooling wear seem to be the biggest concern amongst drillers operating in these conditions.

Technological advances from both tooling and drilling fluid manufacturers have helped increase the popularity of foam drilling. Foam and downhole hammers are being used successfully in a vast number of applications involving drilling hard rock, shale, caliche and other very dense formations. This type of drilling greatly increases penetration rate when compared to the typical mud motor setup. Unlike your typical dish soap, these foams have very small dense bubbles that resemble a thick shaving cream. Foams have the capability of suspending and transporting the suspended rock fragments out of the borehole. Drilling fluid manufacturers may also recommend the addition of Partially Hydrolyzed Polyacrylamide (PHPA) and Polyanionic Cellulose (PAC) polymers to the drilling foam. This helps to coat any reactive soils such as swelling clay. In addition, the long polymer chains increase foam stability and stiffness, which in turn increases the carrying capacity.

Thought of in the same context as bentonite-based drilling fluid, drilling foams do little to control borehole stability. Applied in rock, however, the concern of collapse is quite minimal and in less than consolidated rock drilling foam provides stability in other ways. In situations of varying geology, drilling foam can be combined with bentonite and polymers to produce a stiff drilling foam that also creates a filter cake to help control zones of unconsolidated soils. This combination of products will allow for greater drilling versatility and increase borehole stability. Although drilling foam exhibits gel strength and viscosity, these attributes are impossible to measure using standard API testing. Therefore, it is important to follow the manufacturer’s guidelines when beginning a drilling foam project. It is also critical to take note and watch the cuttings coming out of the borehole. This will help confirm that the viscosity, gel strength and velocity are in line with what is required. Finally, foam is an excellent means of lubricating and controlling temperatures associated with the cutting face without reducing penetration rate. This increases the time and efficiency of the drilling operation.

Disposing of bentonite can often be difficult, especially in urban areas. Unlike disposing of bentonite, drilling foam can easily be broken down with a defoamer or an anti-foaming agent. This defoamer or anti-foaming agent can be sprayed into the pit and will almost instantly dissolve the drilling foam after it exits the borehole. There are many types of drilling foam on the market today. Most are completely non-hazardous and some even exhibit the NSF/ANSI Standard 60 certification (National Sanitation Foundation/American National Standards Institute). Picking the right type of drilling foam for your horizontal directional drilling project is important. Also make certain you have the right size air compressor to match your drilling foam and borehole size. Your local drilling fluid representative should be able to assist you in finding the right product and calculating the cubic feet per minute (cfm) you will need for that particular drilling foam.

Whether you are drilling with foam, bentonite or a combination of the two products, it is essential to match the drilling fluid to the subsurface conditions. As foam drilling continues to grow in popularity, expect to see new technologies to emerge, which will remove some of the geology and mixing restrictions.

Wesley Gibson is a regional manager for CETCO.