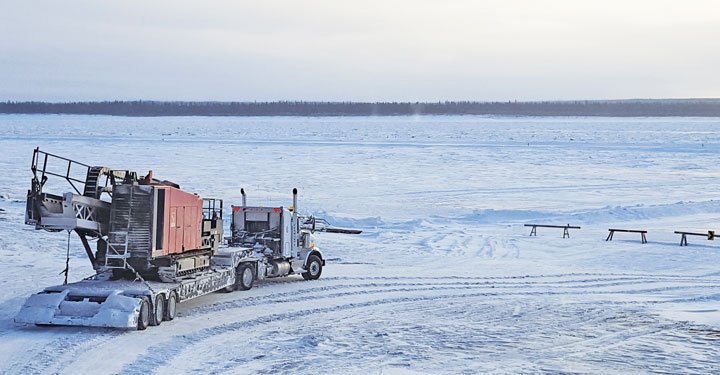 Published by Sharon M. Bueno August 8, 2017 View Profile
Cold and remote. Those words give an accurate, albeit succinct, description of a recent project in the Northwest Territories to install a 640-m portion of a much more extensive, high-speed fibre-optic line for seven Aboriginal communities in northern Alberta.

The $84 million project was a government of the Northwest Territories initiative to bring fibre-optic communications to communities of the MacKenzie Valley and Beaufort Delta regions; the project will also support the expansion of the Inuvik Satellite Station facility, which tracks and receives real time data from polar-orbiting satellites. The entire length of the project — known as the MacKenzie Valley Fibre Link — was 1,154 km.

Mears Canada Corp. took on the portion of the project that crossed the Loon River — a crossing that another contractor tried and fail to cross. The line here will service roughly 600 residents of Fort Good Hope, about 35 km south of the river. Using horizontal directional drilling (HDD), Mears drilled the pilot hole, and then pulled back a 5-in. steel drill stem in order for a run of 2-in. HDPE conduit to be installed. The fibre-optic line would be housed in that conduit.

“Our crossing took place just a couple hundred meters inside the Arctic Circle — slightly left of the middle of nowhere,” Mears Canada operations manager Jonathan Barrie, says with a laugh. The Mears Canada crews mobilized in January 2017, finishing in mid-February. Temperatures averaged -25 C but dropped to -30 and -40 C during a four-day stretch.

How remote was the project site? There are no year-round roads. The area is only serviced by boats and planes during the summer and planes and ice roads in the winter. There is no cell service so crews had to use satellite phones to communicate. The Mears Canada crews mobilized in January 2017, finishing in mid-February. Temperatures averaged -25 C but dropped to -30 C and -40 C during a four-day stretch. The Mears Canada crew was housed at a sleigh camp constructed near the site and transported to and from the drill site.

Prior to mobilizing, Mears Canada prepped the equipment to deal with the harsh weather environment. This included swapping out the normal engine and hydraulic oils for ones that can handle that kind of cold. Auxiliary diesel heaters were included on the diesel engines to keep them warm and steam coils were added to the mud system and mud tanks.

Used for the project was a Vermeer 330×500 drill, a Gardner Denver 350 gpm triplex, INROCK mud motors, two BOS rental centrifuges, as well as a 40-hp boiler, two generators, a crew warming shack and two insulated 400bbl tanks. Barrie further notes that due to an expected narrow right of way on the ice road, Mears Canada custom built a smaller mud system and mud mixing system in order to get to
the jobsite.

“Being so remote, you needed to make sure you had spare parts and all required materials,” Barrie says, noting it was about a 36-hour trip by truck to get anything you needed due to the ice roads.

The Mears Canada team also had to manually trek the equipment over the ice roads at four separate river locations (Liard River, twice over the McKenzie River and the Rabbitskin River) because the ice wasn’t thick enough in January to handle the weight of the equipment, truck and trailer hauling it. “At four river crossings, we had to unload the drill and physically walk it across each river and reload on the other side,” Barrie says. “The longest crossing was near Tulita, NWT and it was about 4.5 to 5 km long and took two and a half hours to walk the rig across.” Beyond the logistical challenges, the ground conditions proved to be just as difficult. The ground under the river was permafrost, interlaced with cobbles, (drilling at a depth of 30 m over 100 m); sandstone was below the permafrost. This combo created a challenge for the crews.

“The interface between the permafrost and the sandstone was tricky to get through on the exit side of the crossing as the bit wanted to deflect downward and cobbles would fall in behind the bit,” Barrie explains. “This caused a major problem at one point where we had 100 to 125 m to punch out and a cobble had fallen behind the bit. We had planted the motor in the cobbles ahead of us, and our annular pressure would spike as soon as the pumps were turned on but we couldn’t advance or retract the bit.

“After putting about 70 percent of the max pull that the mud motor could take and still be run down the hole, we got it freed up. But once we tried to advance again the bit started grabbing the cobbles again,” he says. “Consequently, we had a slow penetration rate and lost fluid to the formation interchange. At this point, we had to trip the bit out and swap the motor and replace the bit.”

Barrie says after going back in, the crews encountered the same issue at the interface but “the decision was made to make a run for the exit.” He says there was a small amount of inadvertent fluid release to the surface but it was captured and controlled before it got near the river.

Not damaging the permafrost was important, as well, which is why the route took the crew deep along the river banks instead of going shallow across the bottom. “There were concerns that if the permafrost could start to thaw out,” Barrie says. “The community was concerned about any detrimental activity to the river banks because permafrost takes forever to repair itself.”

Mears Canada was under a weather-dictated time crunch to finish and demobilize the jobsite by March 15 — ice roads would start to thaw — or face leaving its equipment on the site for 18 weeks and then use barges to retrieve it. “If we didn’t [finish on schedule], there was the potential that the ice road would not be thick enough to hold the equipment,” Barrie says. The job was completed by mid-February — more than enough time to safely remove the equipment.

“This was a very technically and logistically challenging project,” Barrie says, giving special kudos to the crewmembers who stuck out the project when others bowed out due to its harshness. Crews worked 12-hour shifts round the clock. “[This] caused the remaining crewmembers to pick up the slack as getting replacements proved to be difficult.”